REAL GDP DOWN 18.2 PER CENT SINCE START OF THE CRISIS

The Canadian economy shrank by a record 11.6 per cent in April, unsurprising given that it marked the first full month of COVID-19-related shutdowns. This followed a 7.5 per cent decline in March (revised down from -7.2 per cent), meaning the economy was 18.2 per cent below its February or pre-crisis level in April. On a year-over-year basis, real GDP was down 17.1 per cent. 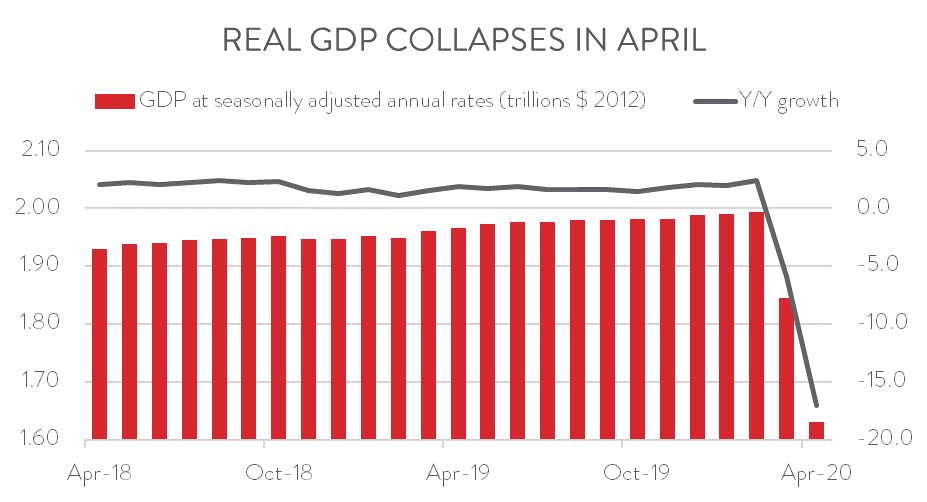 The only positive thing that we can take from this release is that it likely represents the bottom of the COVID-19-induced decline, with May expected to mark the start of the recovery. In fact, Statistics Canada’s early estimate for May is a moderate 3 per cent gain in real GDP. That said, while the economy is on the mend following reopening measures, a return to pre-crisis levels is a long way off and may have to await the arrival of a vaccine or effective treatment.

Given this weak outlook, CME will continue to work with governments to refine and expand current support programs and to extend them as needed depending on the future economic impact of the virus. It also means governments should introduce incentives to stimulate consumer spending, with a focus on boosting demand for manufactured goods.

All 16 major industries saw output shrink in April. The accommodation and food industry posted the sharpest decline at 42.4 per cent. Its output has fallen by nearly two-thirds since the start of the crisis, as restaurants and drinking places either remained closed or only operated at greatly reduced capacity to provide take-out and delivery service. 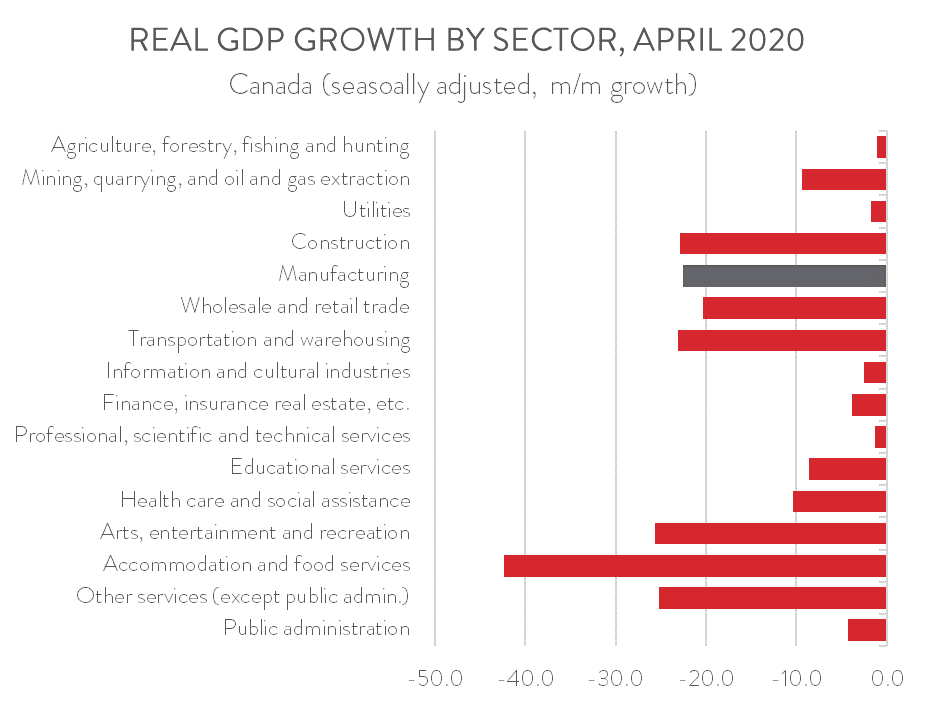 Six other industries posted declines exceeding 20 per cent, including four on the services side of the economy: arts, entertainment and recreation (-25.6 per cent), other services (-25.2 per cent), transportation and warehousing (-23.1 per cent), and wholesale and retail trade (-20.3 per cent). Motor vehicle and motor vehicle parts and accessories merchant wholesalers contributed the most to the overall decline in wholesale trade, while motor vehicle and parts dealers were the main culprits behind the fall in retail trade.

On a somewhat positive note, six industries managed to limit declines to the low single digits, including agriculture, forestry, fishing and hunting (-1.0 per cent), professional, scientific and technical services (-1.3 per cent), utilities (-1.8 per cent), information and cultural industries (-2.6 per cent), finance, insurance, and real estate (-3.9 per cent), and public administration (-4.3 per cent). 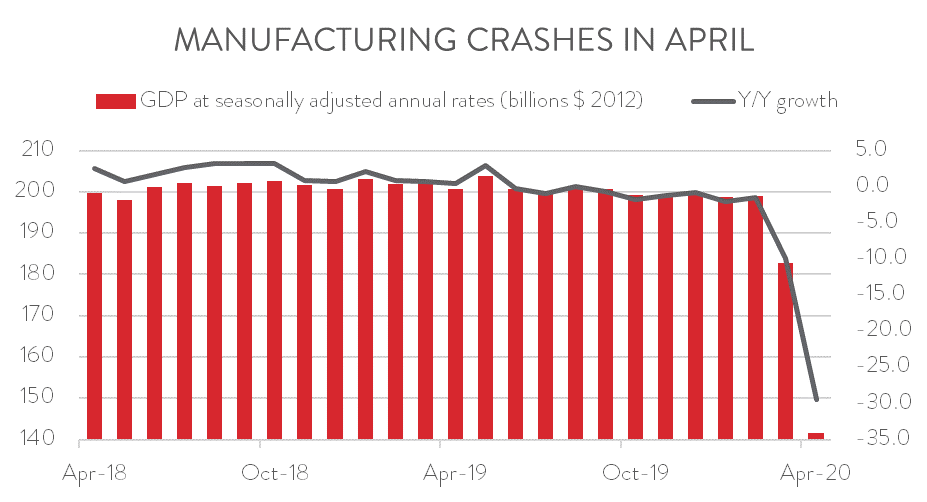 Output fell in all 11 major manufacturing subsectors in April. Motor vehicle and parts output plunged by a jaw dropping 85.2 per cent, attributable to the continued closure of North American automotive plants. Significant declines were also recorded in plastics and rubber products (-32.9 per cent), fabricated metals (-27.7 per cent), and petroleum and coal products (-23.7 per cent). As noted by Statistics Canada, refineries continued to curtail their production in response to a global oversupply of oil, depressed demand, and falling prices.

Meanwhile, aerospace manufacturing output was down 10.6 per cent in April, as it continued to suffer the fallout from lower demand from airlines as air travel plummeted amid the coronavirus. After expanding in March, food manufacturing output dropped 12.8 per cent in April, largely attributable to the temporary closure of some meat processing plants following COVID-19 outbreaks at their facilities. Among the 11 major manufacturing subsectors, only paper products (-5.6 per cent) and chemicals (-6.0 per cent) were able to limit declines to the single digits. 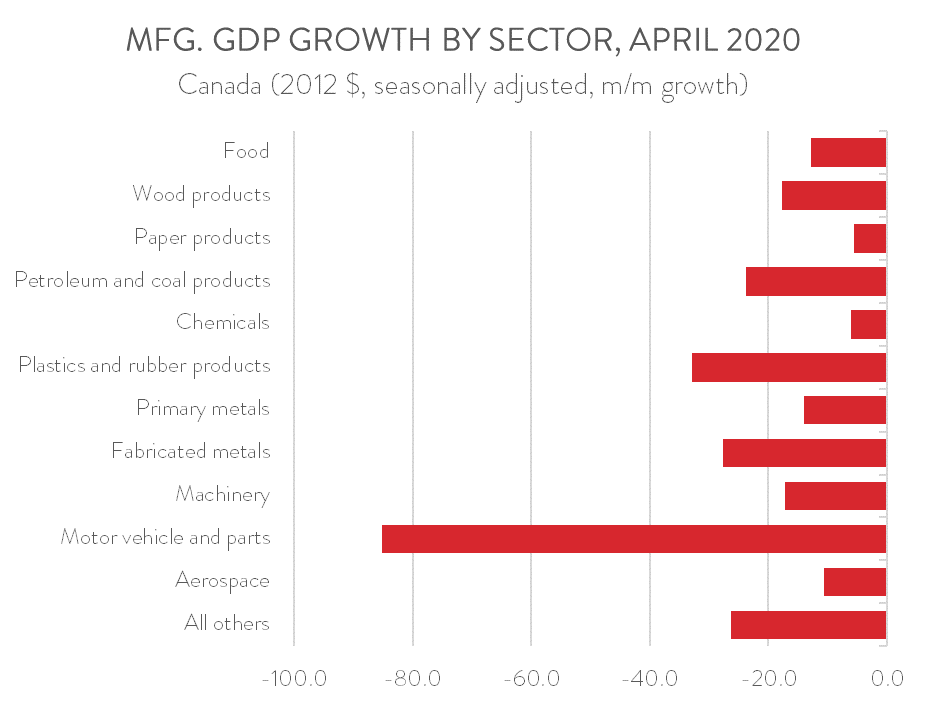