ECONOMY GROWS 0.7 PER CENT IN NOVEMBER

The Canadian economy expanded by 0.7 per cent in November, the seventh straight monthly gain. This left real GDP 3.5 per cent below the pre-pandemic level in February. A preliminary estimate indicates real GDP grew an additional 0.3 per cent in December. This points to a 1.9 per cent increase for the fourth quarter of 2020 and a 5.1 per cent decline for the year. 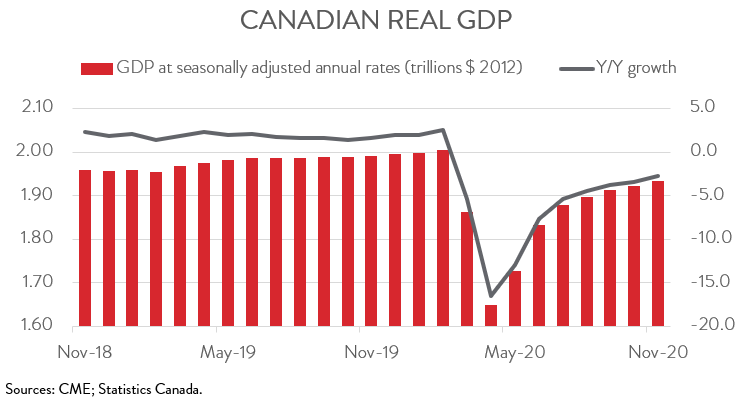 The GDP figures for November and the advance estimate for December both surprised on the upside, suggesting that the Canadian economy had more positive momentum than expected as 2020 came to end. However, given the strong second wave of the virus, the emergence of more contagious variants, and stricter public health measures, the economy is bound to slow sharply and perhaps even post a modest decline in the first quarter of 2021. Fortunately, economic activity is expected to pick up once the vaccine rollout accelerates and COVID-19 infections ebb.

GAINS LED BY MINING AND OIL AND GAS EXTRACTION

The wholesale and retail trade sector continued its impressive run, expanding 1.1 per cent in November, its seventh straight monthly gain. This pushed output 2.4 per cent above its pre-pandemic level. Food and beverage stores led the growth on the retail side, while machinery, equipment and supplies wholesaling drove activity on the wholesale side. 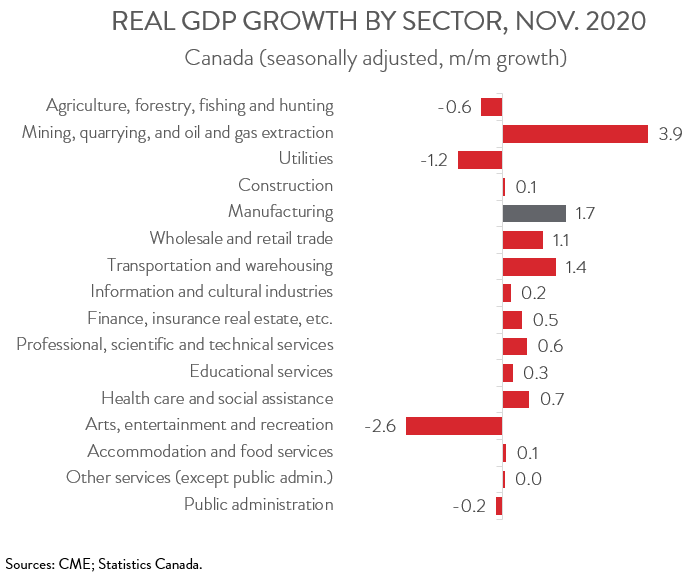 The transportation and warehousing sector expanded for the third month in a row, climbing 1.4 per cent in November. All subsectors except one posted growth. Even though air transportation activity jumped 41.8 per cent, output was still about 84 per cent below its January 2020 level.

On the negative side, utilities output fell 1.2 per cent, its third decline in four months. According to Statistics Canada, the decline in November was attributable to milder weather across many parts of the country, which reduced demand for electricity for heating purposes.

The manufacturing sector grew 1.7 per cent in November, more than offsetting a 0.5 per cent decline in October and leaving output 2.8 per cent below its pre-pandemic level. However, the excitement over the solid November gain should be tempered somewhat by the fact that it was mostly driven by a jump in inventories. 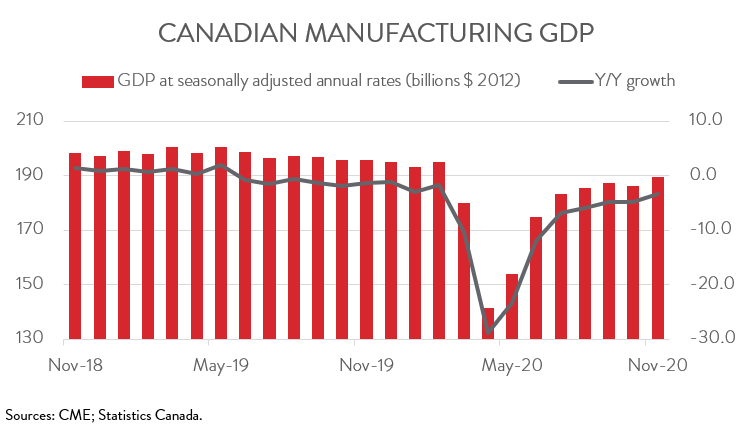 Output was up in 7 of 11 of Canada’s largest manufacturing subsectors. The fabricated metals industry led the way with a 7.1 per cent increase, its fastest gain since June. The machinery industry also had a good month, with output rising 3.8 per cent, its first advance since August. At the same time, output in the plastics and rubber products sector climbed 4.1 per cent, while petroleum and coal products rose 3.0 per cent., with both up for the third month in a row.

At the other end of the spectrum, the aerospace sector posted the steepest fall in November, at 1.9 per cent, which left output 16.6 per cent below its pre-pandemic level. At the same time, motor and vehicle and parts output dipped 0.9 per cent, down for the third time in four months. Finally, declines were also recorded in the wood products sector (-1.0 per cent) and in the chemicals industry (-0.8 per cent). 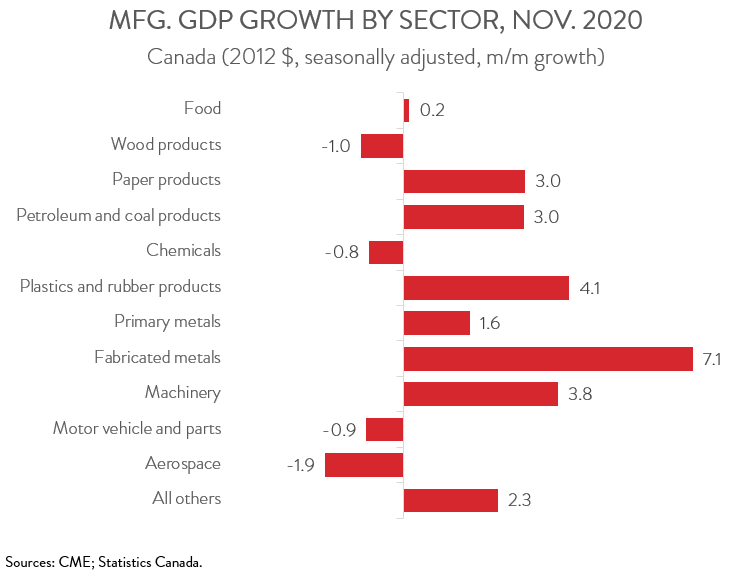