REAL GDP INCREASES AN ANNUALIZED 9.6 PER CENT IN FOURTH QUARTER

Real GDP in Canada rose at an annualized pace of 9.6 per cent in the fourth quarter (2.3 per cent non-annualized), following a 40.6 per cent snapback in the third quarter. Despite the strong second half growth, the economy shrank by 5.4 per cent in 2020, the steepest annual decline since the Great Depression. 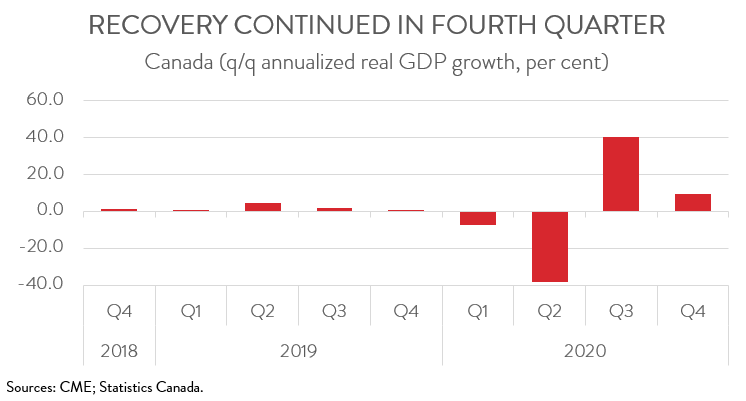 The fourth quarter GDP print and the January advance estimate were both pleasant surprises and indicate that the economy continues to shrug off the latest public health restrictions. It also allays fears of an economic contraction in this year’s first quarter. Still, the near-term outlook depends entirely on the race between the virus and the vaccines, with the emergence of more contagious variants raising the spectre of a third wave.

The fourth quarter increase in GDP was driven by a large increase in business inventories, contributing 1.8 percentage points of the 2.3 per cent quarterly increase. Residential investment also posted a solid gain, as low interest rates continue to fuel strong housing demand. In fact, housing investment rose 3.9 per cent in 2020, one of the few major segments of the economy to post growth last year. 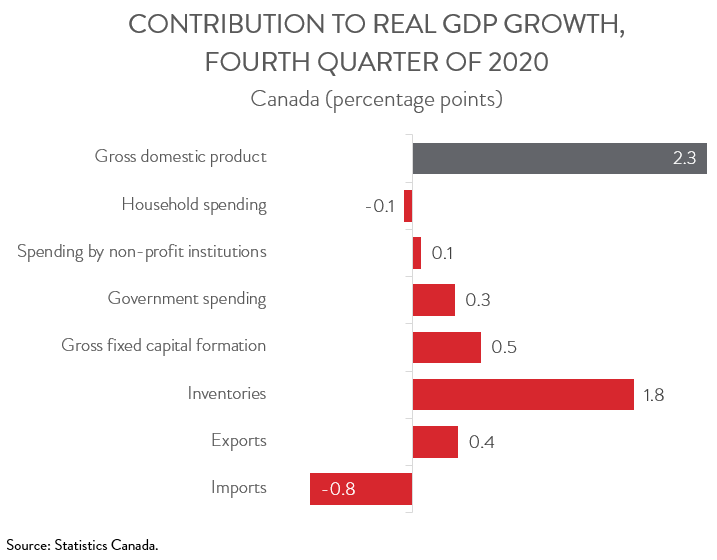 Household spending edged down 0.1 per cent in the fourth quarter, resulting in an annual decline of 6.1 per cent. Spending on goods held up much better than that of services during the year, with the former edging down 0.6 per cent and the latter tumbling by 10.3 per cent.

Growth in export volumes slowed from 14.7 per cent in the third quarter to 1.2 per cent in the fourth quarter, while growth in import volumes decelerated from 21.6 per cent to 2.6 per cent. As a result, net exports subtracted slightly from growth in the quarter. Similar to trends in household spending, last year’s decline in goods exports (-8.0 per cent) was relatively mild compared to that of services exports (-17.4 per cent).

ECONOMY INCHES UP 0.1 PER CENT IN DECEMBER

Turning to the monthly data, real GDP inched up by 0.1 per cent in December. This eighth straight monthly increase left activity 3.3 per cent below February’s pre-pandemic level. An advance estimate pegs January GDP growth at 0.5 per cent. 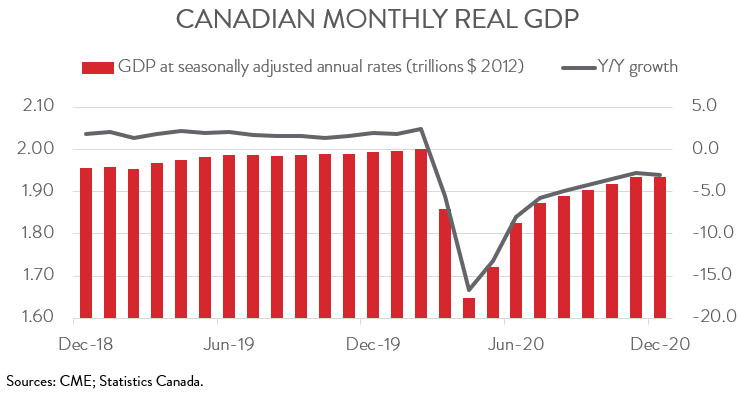 ECONOMIC GAINS LED BY MINING AND OIL AND GAS SECTOR

Output increased in 10 of 16 major industries in December. The mining, quarrying, and oil and gas extraction industry made the biggest contribution with output growth of 2.9 per cent, its fourth straight monthly advance. However, despite the recent gains, output in this industry in December was still 6.8 per cent below its February 2020 level.

Meanwhile, the public sector climbed 0.6 per cent, with all three components—educational services, health care and social assistance, and public administration—up on the month. Construction output rose 1.2 per cent in December, following a 0.3 per cent contraction in November. Finance, insurance and real estate expanded 0.5 per cent, with activity at the offices of real estate agents and brokers hitting a record high.

On the negative side, wholesale and retail trade output fell 2.2 per cent in December, its first decline in eight months. As well, accommodation and food services contracted 6.8 per cent, its fourth consecutive monthly decline. Retail stores, restaurants, and drinking places were all hit hard in December by the reintroduction of lockdown measures in many parts of the country. 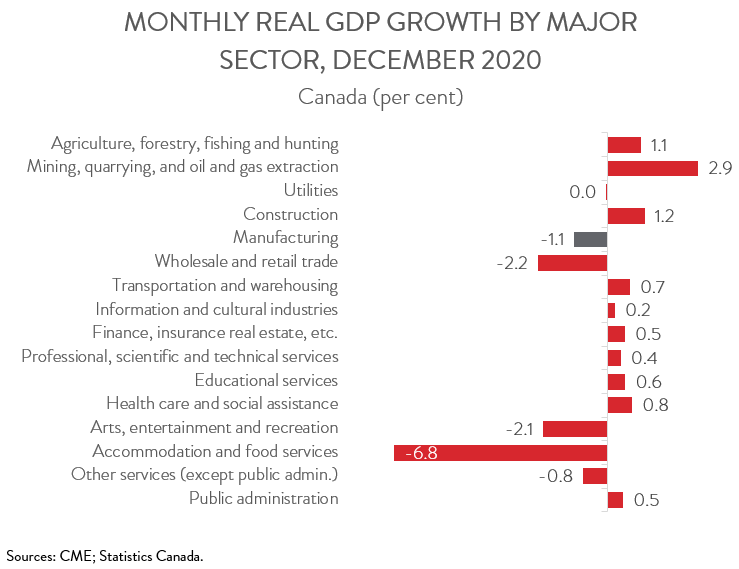 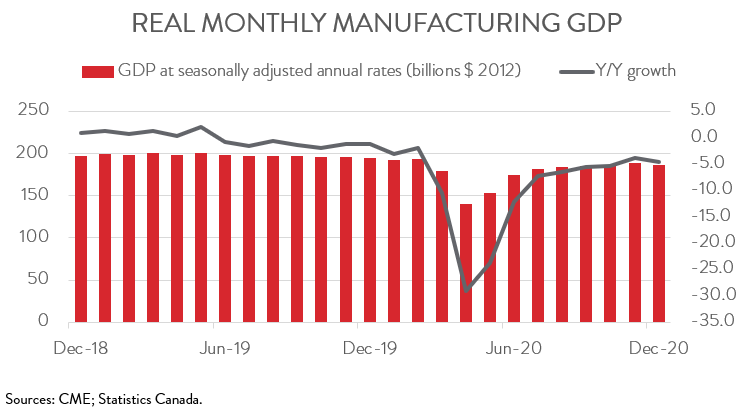 Those three industries were also among the manufacturing subsectors that saw the smallest declines during 2000. Food, paper, and wood manufacturing declined by 1.1 per cent, 1.9 per cent, and 4.3 per cent, respectively, last year. At the other end of the spectrum, transportation equipment (-19.8 per cent), primary metals (-14.5 per cent), machinery (-14.2 per cent), petroleum and coal products (-12.4 per cent), and fabricated metals (-12.3 per cent) experienced some of the most dramatic declines in 2000. 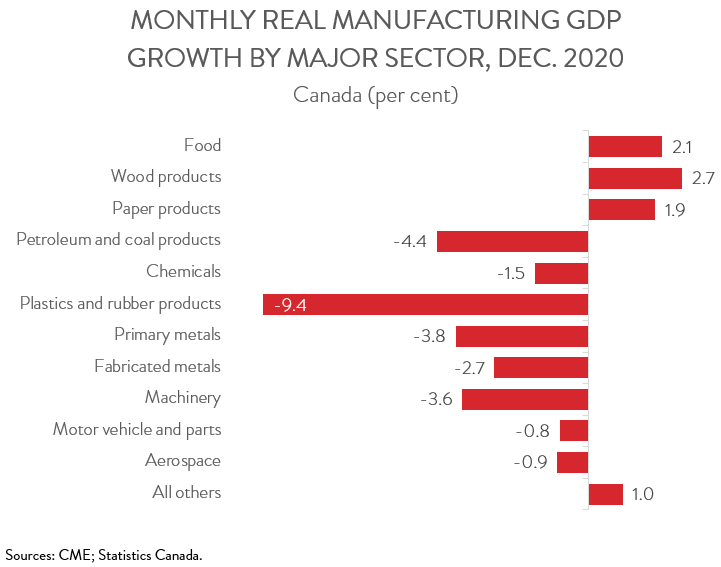