ECONOMY GROWS 0.7 PER CENT IN JANUARY

The Canadian economy expanded 0.7 per cent in January, the ninth straight monthly gain. Real GDP in January was 2.6 per cent below the pre-pandemic level in February 2020. A preliminary estimate indicates real GDP grew an additional 0.5 per cent in February. 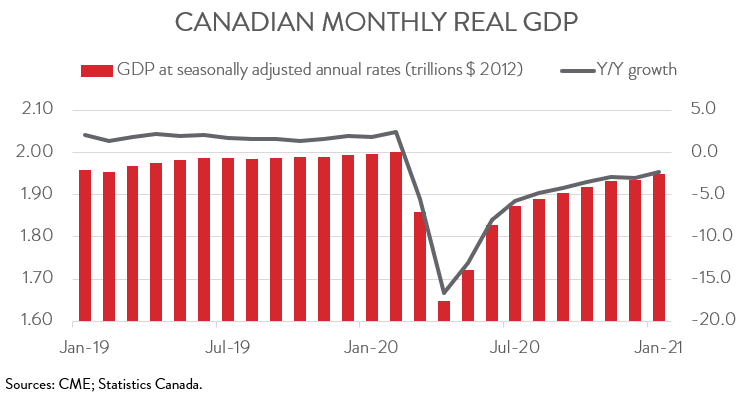 The GDP figures for January and the advance estimate for February provide further evidence that businesses and households have adapted quickly to the reality of living under a pandemic, so the economic impact of the most recent lockdowns have been much more muted than those of last spring. However, the emergence of more transmissible variants of the virus and rising caseloads portend another round of tightening public health restrictions, and this will continue to weigh down segments of the economy reliant on face-to-face interactions.

The output gains were unevenly shared, spanning 9 of 16 major sectors. Wholesale trade posted growth of 3.9 per cent in January, rebounding from a 1.5 per cent contraction in December. The gains in this sector were broad-based, with 8 of 9 subsectors contributing to growth, led by machinery, equipment and supplies wholesaling. 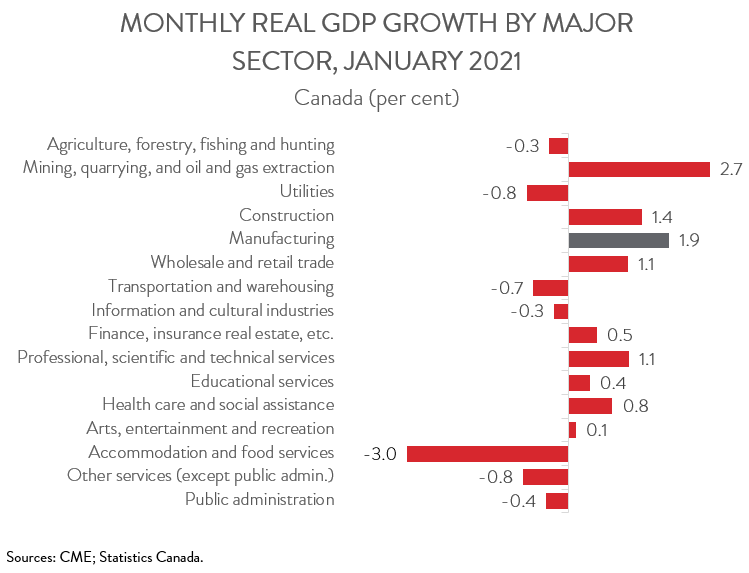 On the negative side, retail trade was down for the third time in four months, falling 1.7 per cent, as the reintroduction of public health restrictions in many parts of the country weighed on the industry. As noted by Statistics Canada, stores more dependent on in-store traffic, such as clothing and clothing accessories stores and sporting goods, hobby, and book and music stores, felt the brunt of the impact. In contrast, non-store retailers posted a third consecutive monthly increase.

Other industries disproportionately affected by public health restrictions also had a tough month in January. Accommodation and food services fell 3.0 per cent, following a 6.7 per cent decline in December. This left output in the sector 41.8 per cent below the pre-pandemic level. At the same time, transportation and warehousing declined 0.7 per cent, led by a 28.0 per cent plunge in urban transit systems.

Thanks to both higher sales and inventory buildup, manufacturing output increased 1.9 per cent in January, more than offsetting a 0.7 per cent decline in December. This gain left output 2.1 per cent below the February 2020 level. 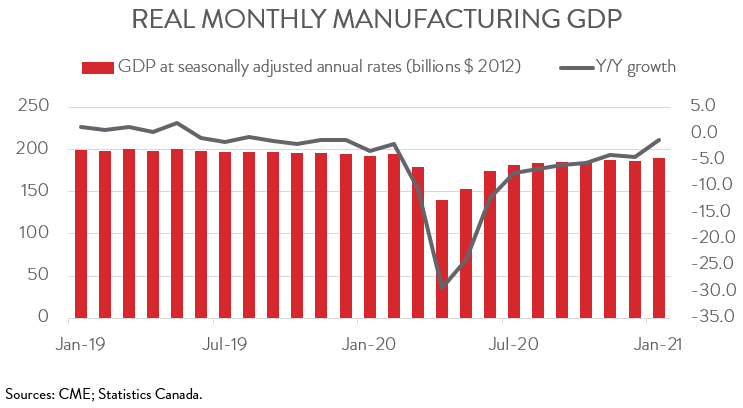 Output was up in 8 of 11 of Canada’s largest manufacturing subsectors. Plastics and rubber products contributed most to the growth, up 8.7 per cent. This more than offset a 5.8 per cent decline in December. The plastics and rubber products industry has experienced one of the strongest recoveries to-date within manufacturing, with output in January 12.3 per cent above the pre-pandemic level.

The fabricated metals and machinery sectors were other growth leaders in January, with output expanding 4.7 and 4.4 per cent, respectively. Conditions in the wood products sector also remained hot, as the industry continues to benefit from higher prices and strong domestic and global demand for its products. Thanks to a 4.1 per cent increase in January, the sector’s output moved 13.9 per cent above the February 2020 level.

On the other hand, motor vehicle and parts manufacturing fell for the fourth month in a row, down 2.4 per cent in January. The industry continues to be affected by production delays due to a worldwide shortage of semiconductors. Paper products (-2.7 per cent) and petroleum and coal products (-1.8 per cent) were the other two major subsectors to post declines in January. 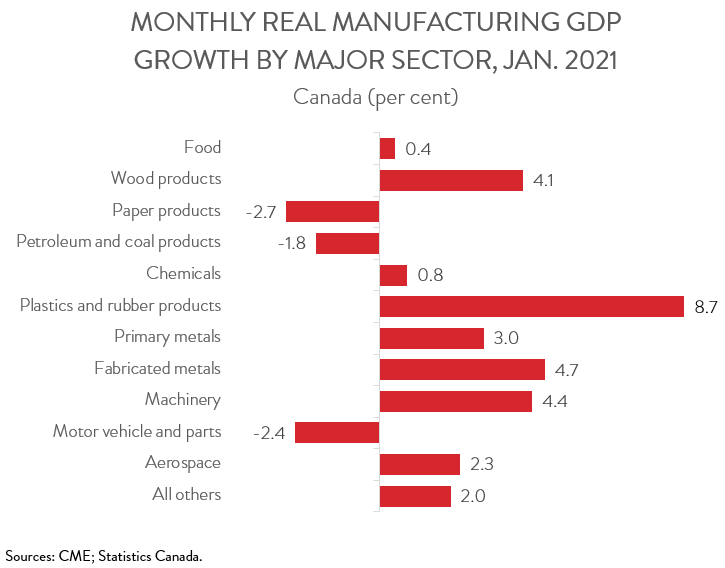