After posting strong gains in March, the Canadian economy followed up with another good month in April. Growth was largely driven by higher-value output from the oil sands and bolstered by higher crude prices.

Unfortunately, this development is cause for mild celebration; March and April marks the first time that Canada’s sputtering economy was able to put together two consecutive months of positive economic growth since last summer. April saw GDP expand by 0.26 per cent – equivalent to an annualized increase of about 3.1 per cent. That builds on a robust expansion in March which saw the economy grow at an annualized rate of about 6.5 per cent. 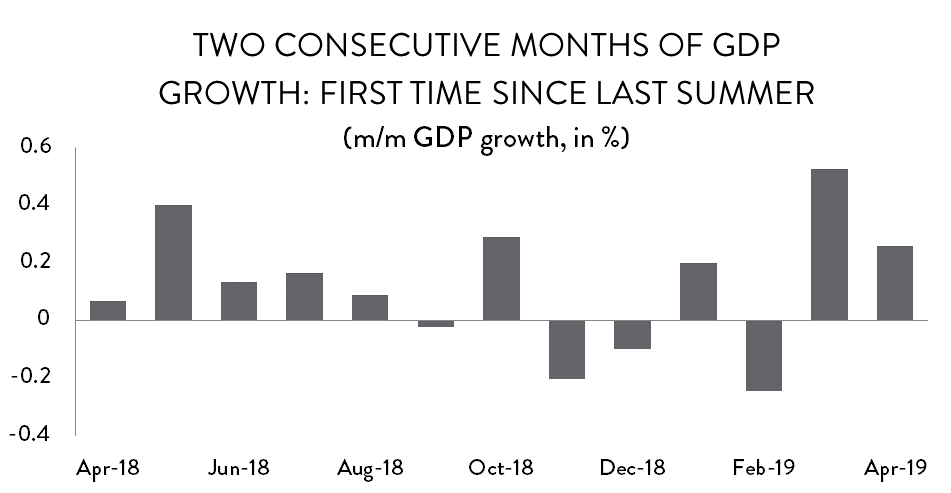 As a result, year-over-year economic growth is starting to pick up. In February, GDP was less than 1.0 per cent higher than it had been 12 months previously. With strong gains in March and April, that growth rate has since increased to 1.5 per cent. However, two points need to be emphasized. First, 1.5 per cent is weak by historical standards in Canada; and second, even with that improvement, the economy is barely growing at the same rate as the national population. On a per capita basis, our economic growth is near zero. 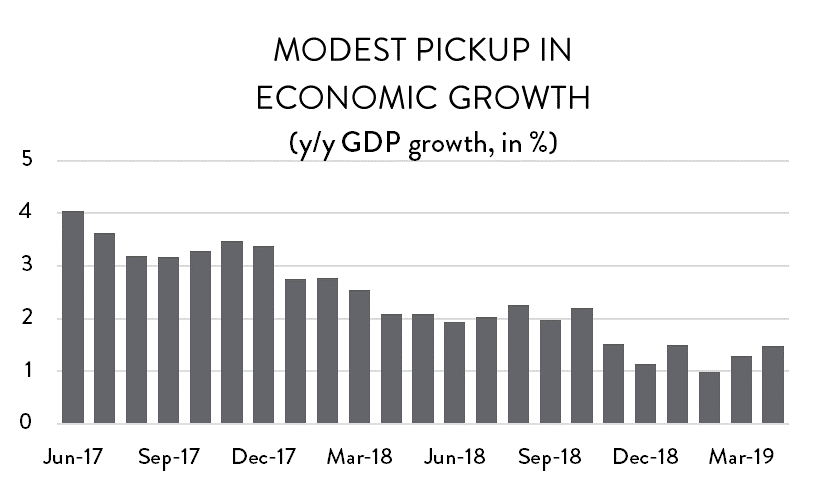 April’s economic gains were the result of a surge in oil sands activity in Alberta. Buoyed by higher crude oil prices, value-added output in the oil sands jumped by 11 per cent compared to March (250 per cent annualized). In fact, oil sands activity added $6.1 billion to the Canadian economy in April, while the economy itself only grew by $5.0 billion. In other words, oil production kept national economic growth out of negative territory that month. 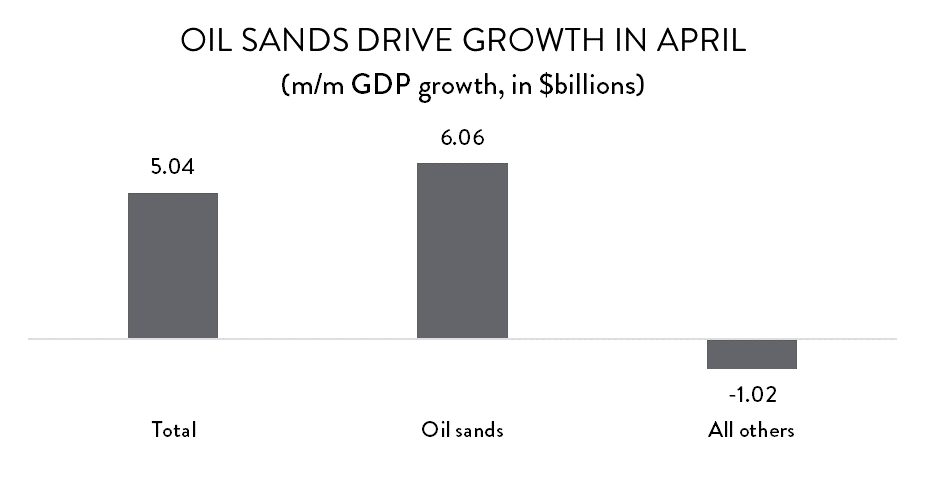 No other industry came close to matching the growth in oil sands activity in April. However, there was a notable increase in wholesale trade activity, which was up 1.4 per cent compared to March (17.7 per cent annualized). Professional, scientific and technical industries also posted solid gains, as did businesses in real estate and leasing. 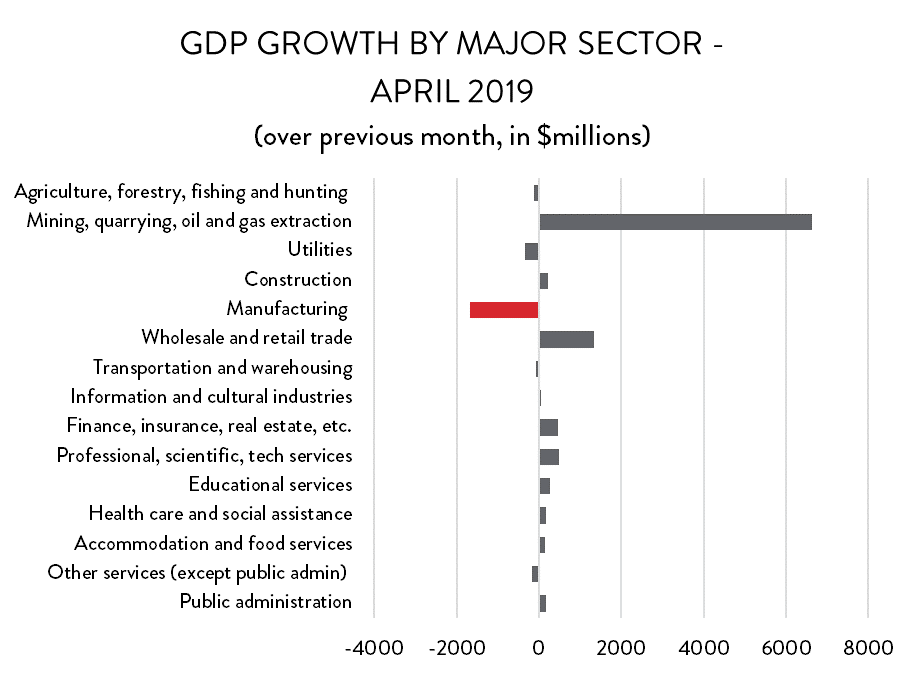 On the negative side, April was a bad month for the manufacturing sector, where GDP fell 0.82 per cent (9.4 per cent annualized). There were also smaller losses in finance and insurance, as well as utilities and agriculture.

The 0.82 per cent decrease in manufacturing GDP – a loss of about $1.7 billion in value-added activity – continues the trend of pronounced month-to-month swings in economic growth so far in 2019. April’s decline was steep enough to completely wipe out March’s gains. 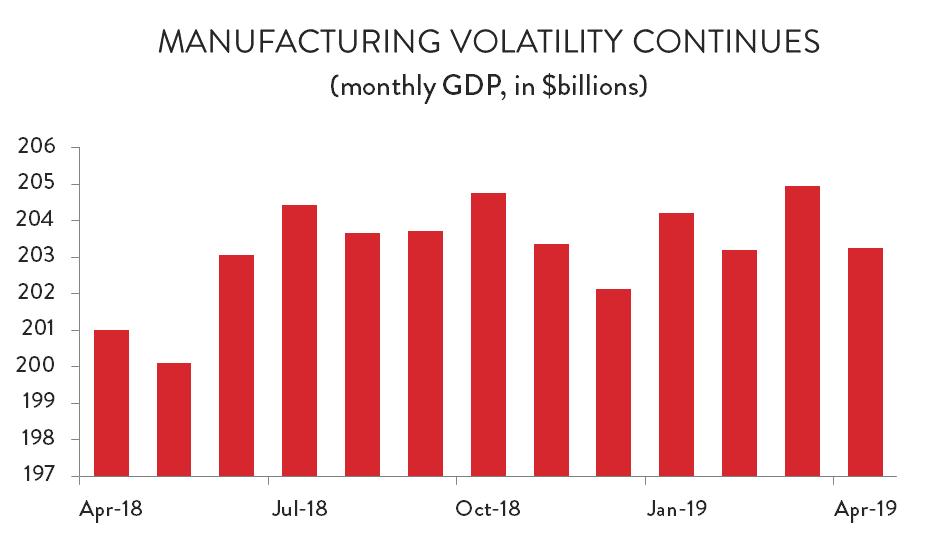 From January through April, GDP in manufacturing is tracking about 1.2 per cent higher than it was over the same period in 2018. That growth rate is almost exactly in line with the Canadian economy as a whole, which is so far averaging growth of 1.3 per cent through 2019.

The largest decline was in motor vehicles and parts production. A combination of temporary plant shutdowns and reduced output in those still active drove GDP in the sector down by 7.2 per cent (59 per cent annualized). At $14.7 billion in April, auto sector GDP fell to its lowest level since late 2011. 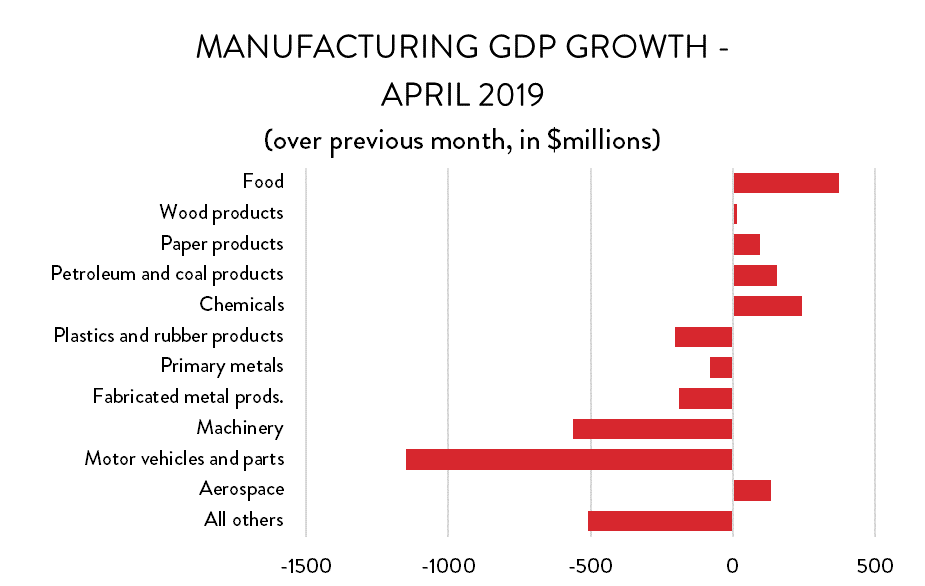 However, the decline in durable goods manufacturing was not limited to motor vehicles and parts. Machinery output fell by $561 million compared to March (a 3.1 per cent decline), while fabricated metals declined by $188 million (1.1 per cent). There were also losses in computers and electronics, electrical equipment, and primary metals.

Things were better on the non-durable goods side. Refinery activity was up by $155 million (1.4 per cent) – although that growth was rather weak considering the pull from higher oil prices. Food processing and chemicals were up by $371 million and $243 million, respectively (1.3 per cent and 1.1 per cent), while paper producers rebounded from a weak showing in March.