ECONOMY EXPANDS 1.1% IN FEBRUARY; MANUFACTURING UP 0.4%

The Canadian economy grew 1.1% in February, the ninth consecutive monthly gain and the fastest increase in 11 months. A preliminary estimate for March points to another solid advance of 0.5%. 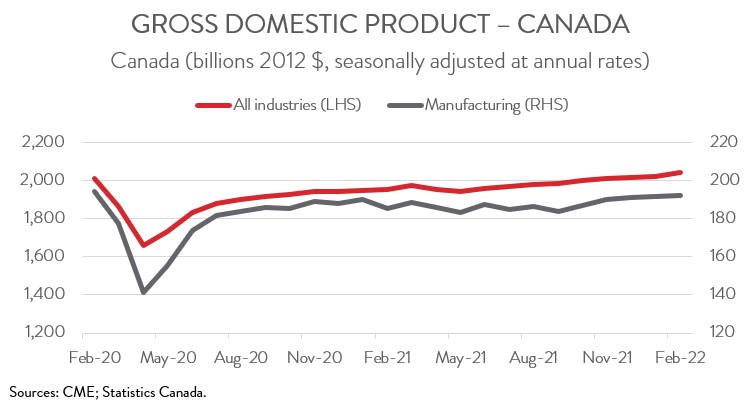 Manufacturing output rose 0.4% in February following a flat reading in January that was revised up from a previously reported 0.5% decline. Even though this was the fourth increase in five months, the sector’s output remained 1.2% below its pre-pandemic level of February 2020, attributable to supply chain disruptions and labour shortages that are hampering the ability of manufacturers to increase production. In comparison, headline GDP was 1.5% above this threshold. On a more positive note, Statistics Canada’s preliminary estimate indicates that manufacturing output made further gains in March.

The Canadian economy continues to hum along. The strong February print along with the March flash estimate suggest that real GDP advanced at an annualized rate of about 5.6% in the first quarter. This is well above the Bank of Canada’s latest forecast of 3.0%, giving the central bank more reason to hike its target interest rate another 50 basis points at its next meeting on June 1st.

The increase in GDP was broad-based, spanning 16 of 20 industries. The mining, quarrying, and oil and gas extraction sector led the way with growth of 3.4% in February, the largest monthly increase since December 2020, as all subsectors were up. Most notably, coal mining posted its third consecutive month of double-digit growth, attributable to increased rail shipments and exports of the commodity in the months following disruptions caused by the 2021 BC floods. 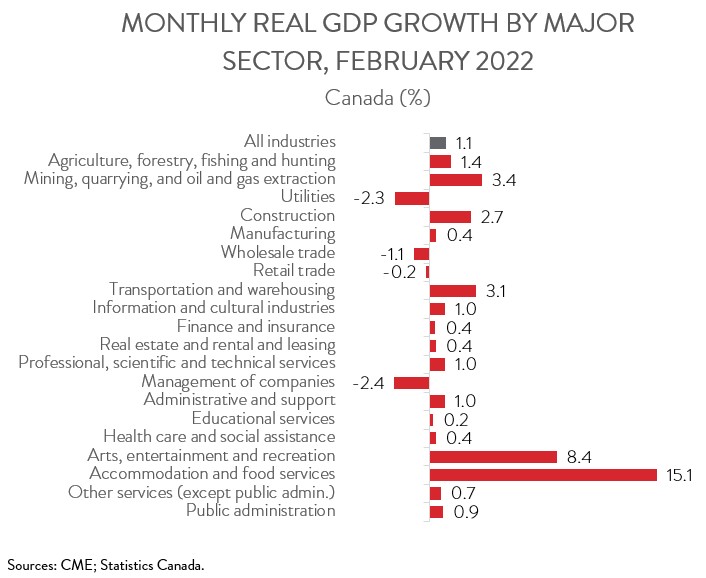 Client-facing industries also enjoyed strong gains, with many governments across the country easing and removing restrictions on indoor gatherings as the Omicron wave began to subside. For instance, accommodation and food services output surged 15.1% in February, almost fully recouping the steep losses recorded over December and January.

On the negative side, wholesale trade output fell 1.1% in February, down for the first time in seven months. At the same time, utilities output contracted 2.3%, following robust growth in January when unseasonably cold weather in many parts of the country pushed up demand for both electricity and natural gas for heating purposes.

Turning back to manufacturing, output was up in 6 of 11 major subsectors in February. Motor vehicle and parts manufacturing led the way with an 8.6% gain in February, more than offsetting a 6.0% decline in January. As highlighted in Statistics Canada’s manufacturing sales report released in mid-April, the auto industry ramped up production in February despite the ongoing global semiconductor shortage and the blockade of the Ambassador Bridge in Windsor, Ontario. However, despite this increase, the sector’s output remained 19.1% below its pre-pandemic level.

On the downside, plastics and rubber product manufacturing fell 4.1% in February, the first decline in three months, while primary metal manufacturing contracted 2.4%, down for the first time since September 2021. 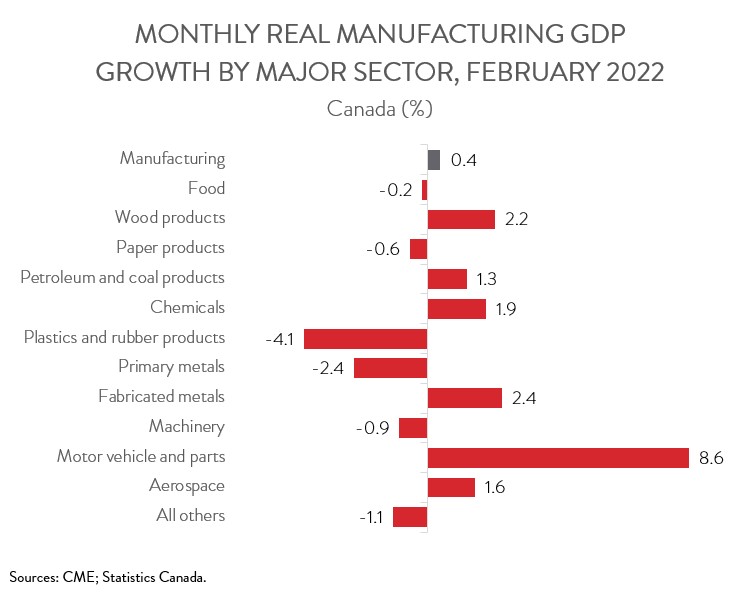