Canada’s economy climbed by 0.1 per cent in November, largely erasing the losses from October. However, real GDP was up only 1.5 per cent compared to November 2018, the 13th straight month of sub 2 per cent year-over-year growth. GDP continues to advance at a slightly slower pace than population growth. 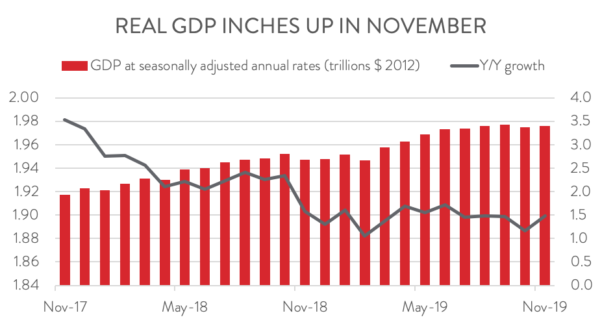 Even with the gain in November, fourth quarter annualized economic growth may still struggle to meet the Bank of Canada’s already tepid estimate of 0.3 per cent.

Economic growth was broad-based in November, as 12 of 16 major industry groupings posted a gain. Utilities led the way with a strong 2.1 per cent expansion, thanks to unseasonably cold weather in central Canada. Gains in other industries were comparatively more modest. After three months of stagnation, construction GDP rose by 0.5 per cent in November. Retail output also climbed 0.5 per cent, partly recovering from a steep 1.1 per cent fall in October. Finance, insurance, and real estate recorded output growth of 0.4 per cent, its 9th consecutive month of expansion. Finally, the health care and educational services sectors also contributed to growth.

On the negative side, mining and oil and gas extraction and transportation and warehousing both experienced significant declines in November, with the former tumbling by 1.4 per cent and the latter by 0.9 per cent. Both industries were weighed down by the CN rail strike and the shutdown of the Keystone pipeline, two transitory factors that have since been resolved. Arts, entertainment and recreation and agriculture were the only other sectors to post an output decline in November. 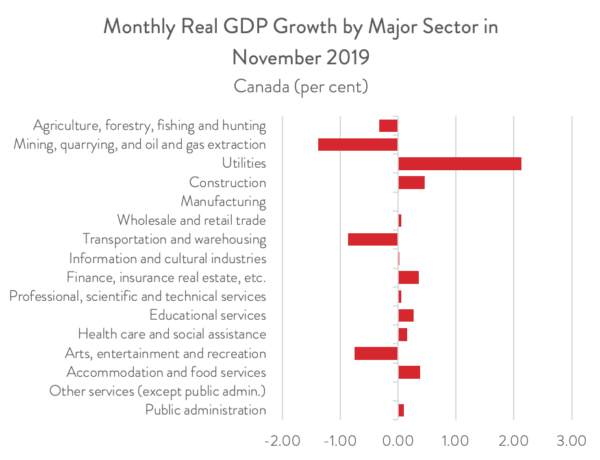 Manufacturing output growth was flat in November. As a result, this sector has registered only one output increase in the past six months. In addition, output was down 1.6 per cent compared to the same month one year ago, marking the fifth time ins six months that year-over-year growth has been in the red. The November GDP report is yet another sign that Canada’s manufacturing sector continues to be weighed down by a weak global trade environment but also by policy-induced competitiveness challenges. 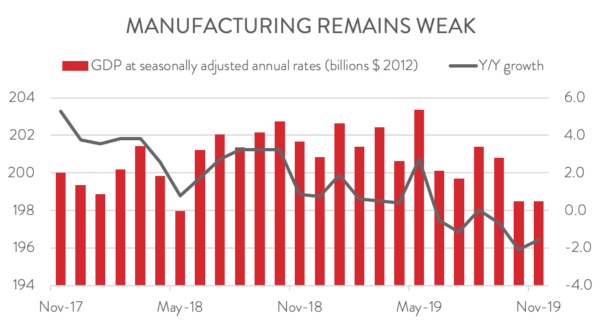 MOTOR VEHICLE AND PARTS PRODUCTION SIDESWIPED BY US GM STRIKE

It was a mixed month within Canada’s manufacturing industry, with just over half of the 11 major subsectors posting an output increase in November. Motor vehicle and parts manufacturing saw output jump 5.1 per cent, as some factories ramped up production following the conclusion of the GM strike in the United States. Solid increases were also recorded in plastics and rubber products, fabricated metals, wood products, and machinery. Unfortunately, these gains were fully offset by losses elsewhere, particularly in chemicals, food and primary metals. 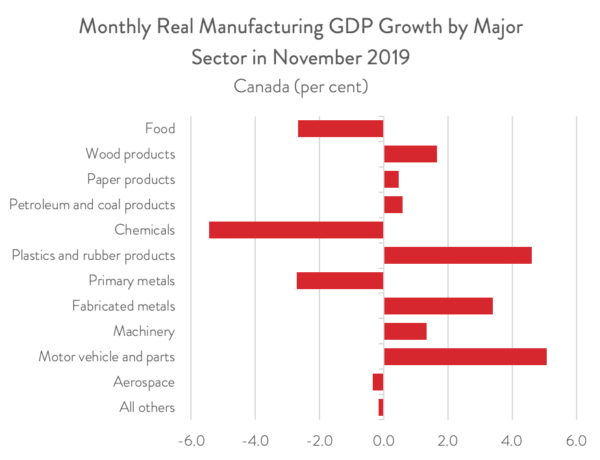