Canada’s economy expanded by 0.3 per cent in December, up from 0.1 per cent in November. This was the strongest monthly gain since March, and it pushed up year-over-year growth in real GDP to 1.9 per cent. 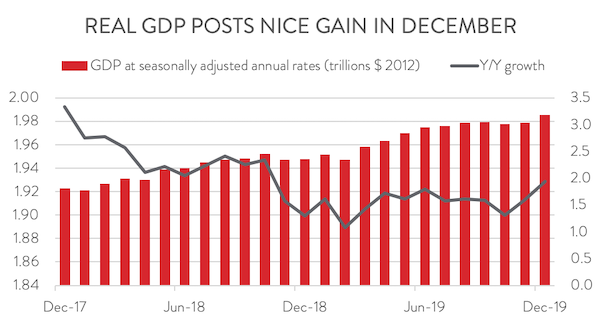 However, despite the solid monthly GDP print, the fourth quarter data release shows that the Canadian economy entered 2020 with very little momentum. And, with the economy currently grappling with the significant economic impacts of the coronavirus outbreak and rail blockades, the economy risks losing further momentum in the first half of the year. 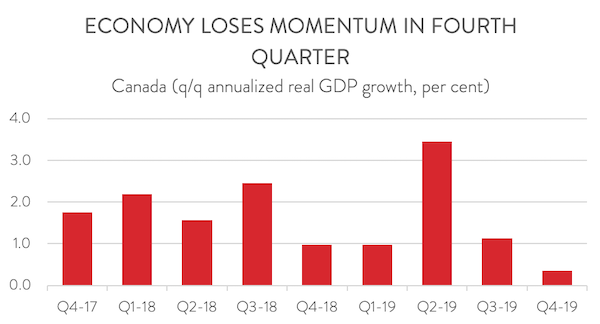 Annualized real GDP growth came in at a meagre 0.3 per cent in last year’s fourth quarter, down from 1.1 per cent in the third quarter and 3.4 per cent in the second quarter. The economy was held back by weak international trade and private investment performances. Exports tumbled by 5.1 per cent, the second consecutive quarterly decline, although this was partially offset by a 2.5 per cent fall in imports. Declines were recorded in all major categories of private investment—non-residential structures, machinery and equipment, and intellectual property products. On the positive side, household spending increased by a solid 2.0 per cent, while government spending and an accumulation in inventories also contributed to fourth quarter GDP growth.

All told, the Canadian economy expanded by 1.6 per cent in 2019. With the population increasing at a robust pace of 1.4 per cent last year, real GDP per capita growth came in at a paltry 0.1 per cent. In short, little progress was made last year in improving Canadians’ standard of living. 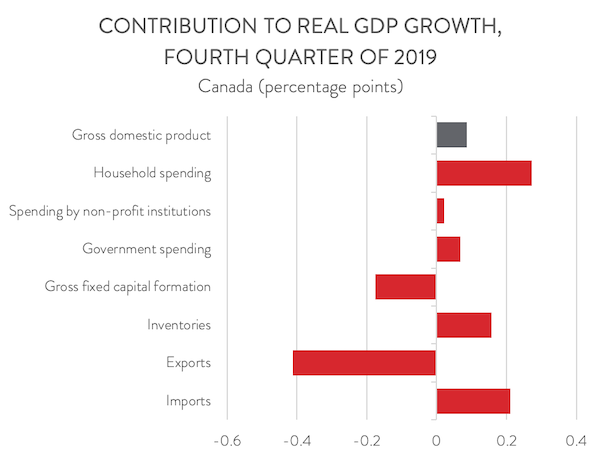 Economic growth was widespread in December, as 12 of 16 major industries recorded a gain. At 1.5 per cent, transportation and warehousing posted the biggest increase. Rail transportation output jumped by 9.5 per cent, more than recovering from a November setback caused by the eight-day CN rail strike. Likewise, pipeline transportation bounced back in December, following November’s temporary closure of the Keystone pipeline.

Mining and oil and gas extraction also had a good month, posting GDP growth of 1.3 per cent in December. According to Statistics Canada, there was an upsurge in oil sands production in Alberta, and this more than offset declines of crude petroleum extraction at Canada’s North Atlantic facilities. Notable gains were also recorded in arts, entertainment and recreation, in wholesale and retail trade, and in manufacturing (see below).

On a negative note, utilities output fell by 0.5 per cent in December, following a strong November that was boosted by unseasonably cold weather. Declines were also recorded in educational services, in accommodation and food services, and in agriculture, forestry, fishing and hunting. 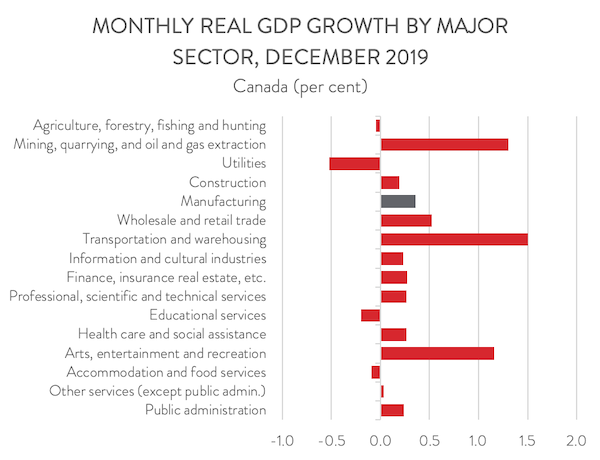 MANUFACTURING BOUNCES BACK IN DECEMBER

The manufacturing industry bounced back in December with 0.4 per cent GDP growth, its first increase in four months. However, this still left output down 0.8 per cent on a year-over-year basis. For the year as whole, manufacturing output eked out a gain of just 0.1 per cent, as the sector was weighed down by global trade tensions and domestic policy challenges. 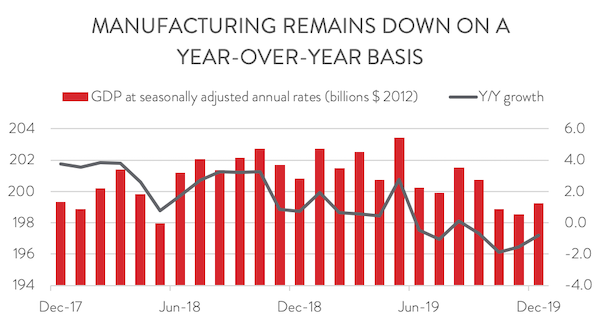 Despite the strong manufacturing gain in December, less than half of the 11 major subsectors posted an output increase in December. Chemicals output jumped by 6.1 per cent, its highest rate of growth since February 2016. At the same time, primary metals enjoyed output growth of 5.5 per cent, partly offsetting two consecutive monthly declines.

At the other end of the spectrum, plastics and rubber products GDP tumbled by 7.1 per cent, its biggest monthly decline in nearly three years. Meanwhile, motor vehicle and parts manufacturing saw output fall 3.2 per cent, partly attributable to the shutdown of GM’s Oshawa Assembly Plant. Fabricated metals, machinery, and aerospace were three other industries to post notable declines. 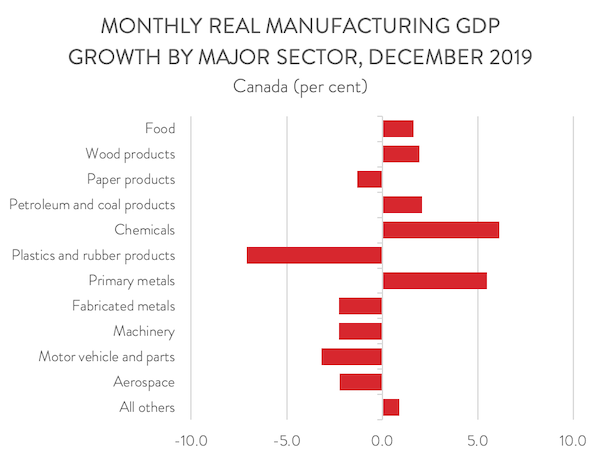