REAL GDP FALLS AN ANNUALIZED 8.2 PER CENT IN FIRST QUARTER

Even though COVID-19-related stay-at-home orders were not issued until mid-March, the impact was large enough to lead to the sharpest quarterly decline in Canadian real GDP since the first quarter of 2009. In fact, the economy expanded through January and February, but owing to a sharp contraction in March, real GDP shrank at an annualized rate of 8.2 per cent. Of course, the worse is yet to come. The second quarter decline will be historic. 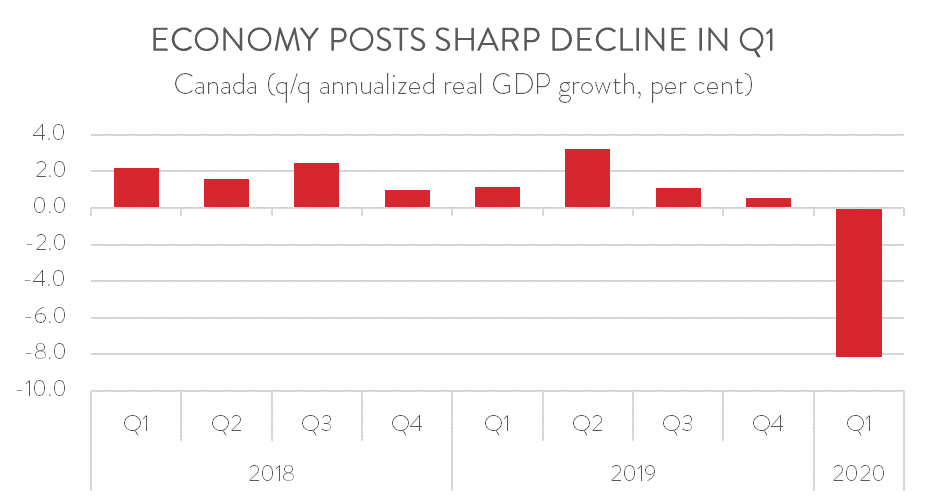 Household spending fell by 2.3 per cent in the first three months of 2020, the steepest quarterly decline on record. Opportunities to spend were severely constrained by the closure of non-essential retail stores, restaurants, and other services, as well as restrictions on travel. Consumers were reluctant to spend anyway, with the pandemic inflicting substantial job losses and plunging the economy into a deep recession.

At the same time, government final consumption expenditure declined by 1.0 per cent, largely reflecting the impact of school closures. Meanwhile, exports shrank 3.0 per cent and imports fell 2.8 per cent, as Canada’s major trading partners also shut down their economies to slow the spread of COVID-19. Finally, there was also a large draw down in non-farm business inventories during the quarter, a consequence of growing supply chain disruptions. 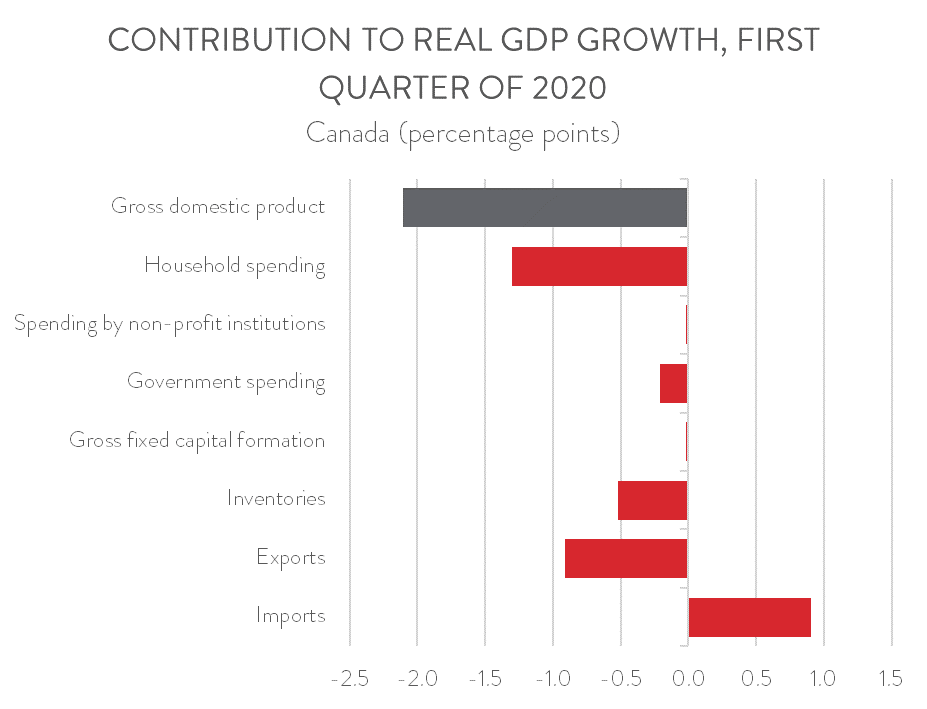 ECONOMY SHRINKS BY A RECORD 7.2 PER CENT IN MARCH

Turning to the monthly data, real GDP fell 7.2 per cent in March, the largest monthly decline since the series began in 1961. This record will be short-lived, however, as worse numbers are on the way. Statistics Canada also provided a nowcast update for April, in which it estimated an even steeper 11 per cent decline. 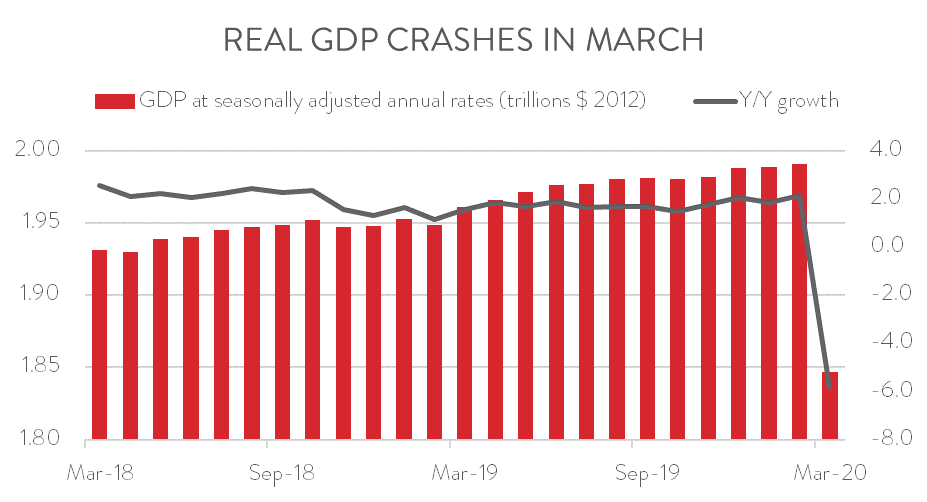 The economic devastation was widespread in March, as 15 of 16 major industries saw output fall. Not surprisingly, the sharpest declines occurred in non-essential industries that were forced to shut down. In fact, arts, entertainment, and recreation output fell by a jaw dropping 41.3 per cent, while accommodation and food services output tumbled by 36.9 per cent. Four other industries also saw double-digit declines, including transportation and warehousing, educational services, and health care and social assistance. The latter industry was hit particularly hard by a sharp decline in activity at the offices of physicians, health practitioners, dentists, and medical and diagnostic laboratories. Although just shy of a double-digit drop, retail trade also experienced its largest monthly decline on record, with output falling 9.6 per cent. Utilities was the only industry to buck the trend in March, posting an increase of 0.4 per cent. 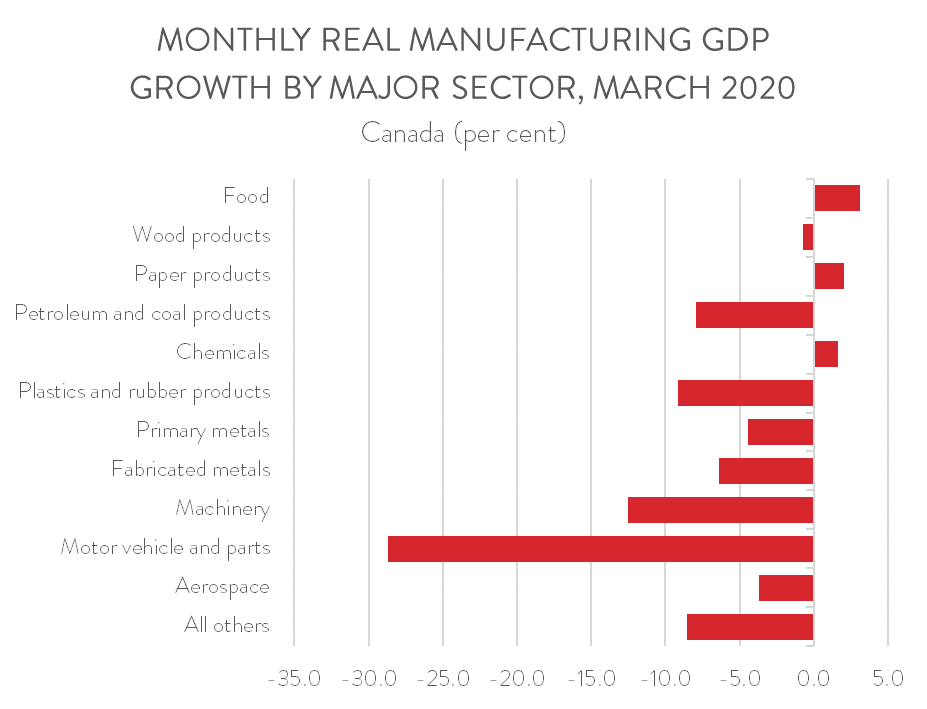 Despite being designated an essential service in most parts of the country, the manufacturing industry was unable to escape unscathed from the economic downturn. The sector’s real GDP fell 6.5 per cent in March to its lowest level since May 2016. It was also manufacturing’s biggest monthly decline on record, surpassing the previous record drop of 4.4 per cent in December 2008. 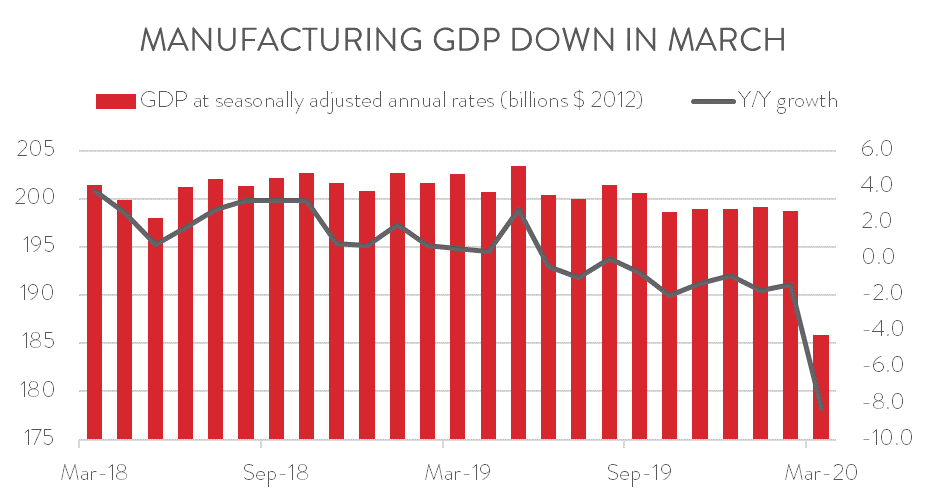 MOTOR VEHICLE AND PARTS OUTPUT TUMBLES BY NEARLY A THIRD

The losses in manufacturing were also widespread, with output falling in 8 of 11 major subsectors. The motor vehicle and parts industry was by far the hardest hit. Its output fell a record 28.7 per cent, as the auto industry halted production in the middle of the month to implement measures designed to ensure the health and safety of its workers. Vehicle sales have also fallen sharply since the start of the outbreak.

The aerospace industry, which is also facing a severe drop in demand for its products, posted a 3.7 per cent decline in March. Meanwhile, petroleum and coal product manufacturing output contracted by 7.9 per cent, as refineries curtailed production in the face of falling global demand and oversupply.

The three subsectors that posted growth in March—food, paper, and chemical—should not come as a surprise. Output in food and paper manufacturing climbed 3.1 per cent and 2.0 per cent, respectively, as consumers flocked to stores to stock up on groceries and toilet paper. Chemical manufacturing rose 1.6 per cent, thanks to production gains in pharmaceutical and medicine manufacturing and in soap, cleaning compound and toilet preparation manufacturing.