The Canadian economy rebounded from a weak February with significant gains in March. However, declining exports and a surge in imports meant that overall GDP growth in the first quarter of 2019 was just as poor as it was in the previous quarter.

Beginning with the monthly numbers, GDP was up by 0.5 per cent in March – equivalent to a robust annualized increase of nearly 6.2 per cent. Those gains were driven by strong growth in resource extraction and manufacturing. Meanwhile, there was a slight downward revision to February’s GDP numbers. Initial estimates of an annualized 1.7 per cent decline that month were widened to a 2.7 per cent drop. 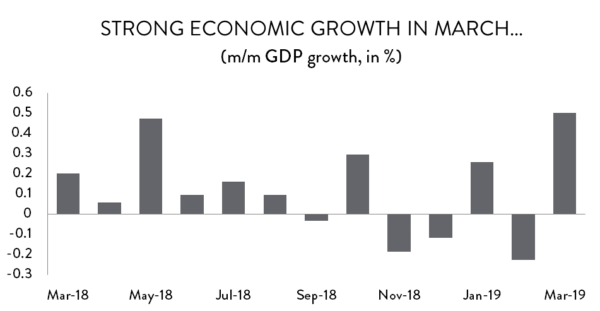 Thanks in large part to those healthy gains in March, the Canadian economy managed to eke out a modest increase in the first quarter of 2019. GDP was up by just 0.4 per cent, compared to a 0.3 per cent increase the previous quarter (that latter figure was revised downward from 0.4 per cent). These are by far the weakest growth figures Canada has seen since the spring of 2016 when wildfires ravaged the Ft. McMurray area and shut down most oil production in Alberta. 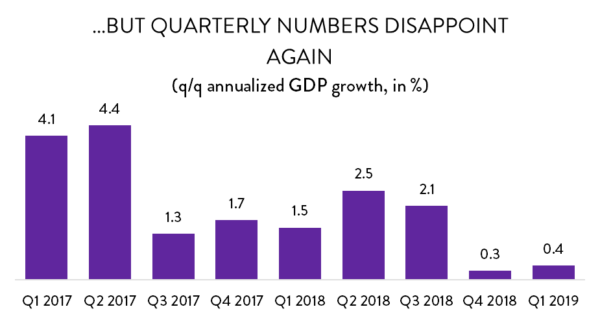 The good news in those poor quarterly GDP numbers is that domestic activity in Canada was strong. Consumer spending – which had been decelerating steadily for 18 months – rebounded smartly, posting a 3.5 per cent increase in Q1. That growth was driven by a surge in durable and semi-durable goods spending. 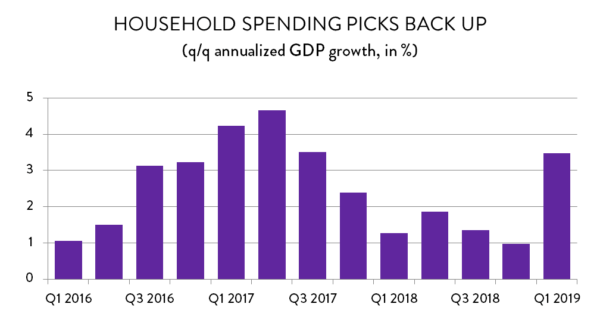 More important still for the long-term competitiveness of the Canadian economy was a welcome recovery in business sector investment in early 2019. Business non-residential gross fixed capital formation jumped by 13.5 per cent in Q1 – its strongest showing in years. Unfortunately, that increase only begins to fill in the hole created by three consecutive quarters of declining investment. However, it is undoubtedly a major step in the right direction.

The surge in business investment is likely tied to the changes made to federal government Capital Cost Allowance (CCA) tax rules late last year. Those changes allowed Canadian businesses to write off qualifying capital purchases in the year in which they were made – effectively treating them like a regular business expense. Canadian businesses responded. Machinery and equipment purchases soared in the first quarter of 2019, rising by nearly 40 per cent – the largest quarterly increase in M&E spending in more than 30 years. 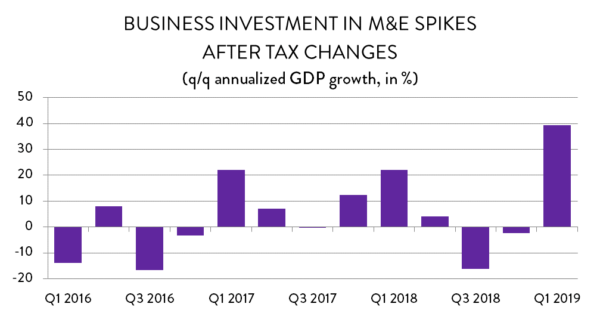 The reason Q1 GDP growth was so poor was because those healthy gains on the consumer and business investment side were wiped out by the combined effect of weak exports and surging imports. GDP in goods exports was down 5.7 per cent compared to the previous quarter. Meanwhile, imports (which count as a “negative” in GDP calculations because they represent spending on goods and services not produced in Canada) were up 7.7 per cent.

Turning back to the monthly GDP numbers, there were healthy gains in most industries in March; of the 15 major industrial sub-sectors, 12 were higher and only two were lower (GDP in information and cultural industries was unchanged). Leading the way was a spike in energy and mining activity, which rose by an annualized 26 per cent. Unfortunately, that increase was only enough to offset a similar-sized decline in February; GDP in resource extraction has been on a steady downward path since last May. 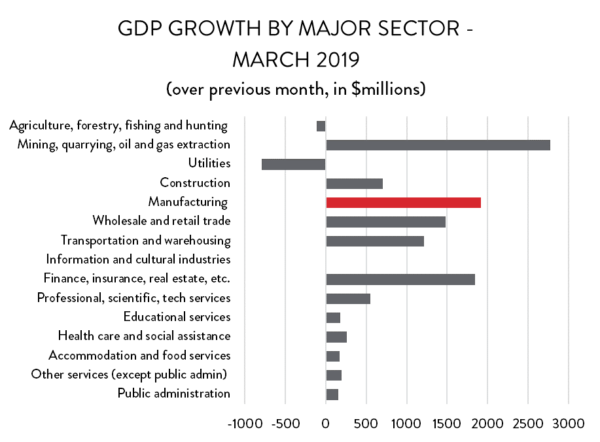 There was also a strong recovery in manufacturing sector activity in March (see below), while professional scientific and technical services industries continued to post healthy gains (5.9 per cent annualized). Other major growth drivers in March included wholesale and retail trade (9.1 per cent) and transportation and warehousing (18 per cent).

The manufacturing sector has been on a bit of a wild ride so far in 2019. The year began with a massive spike in value-added output in January, but the sector gave back more than half of those gains the following month. Then in March GDP was up strongly once again, posting an increase of about 11.9 per cent on an annualized basis. The net effect of those movements is that manufacturing GDP in March was just slightly higher than it was in January. 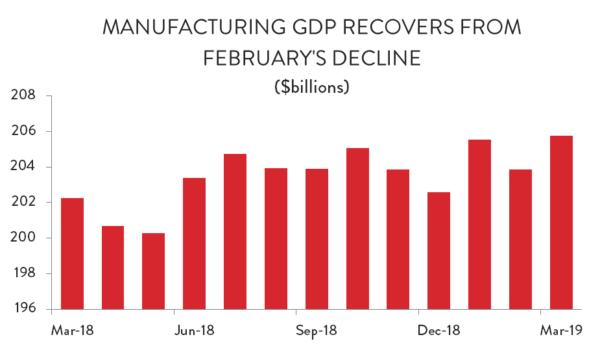 All told, through the first quarter of 2019, GDP in the sector is tracking about 1.5 per cent higher than it was over the same period last year. While no one would call that an exceptional rate of growth, it is nevertheless much better than the 0.4 per cent growth recorded by the Canadian economy as a whole over the same time.

Although overall GDP growth in manufacturing was strong in March, results within the sector were decidedly mixed. Of the eleven major industrial sub-categories, four were notably higher, four lower, and three effectively unchanged.

By far the biggest increase was in chemicals industries where GDP was up by $801 million, countering similar-sized losses the previous month. Producers of fabricated metals saw their value-added output increase for the second month in a row (by $439 million in March), and GDP in motor vehicles and parts was up by $203 million, recovering most of February’s losses. 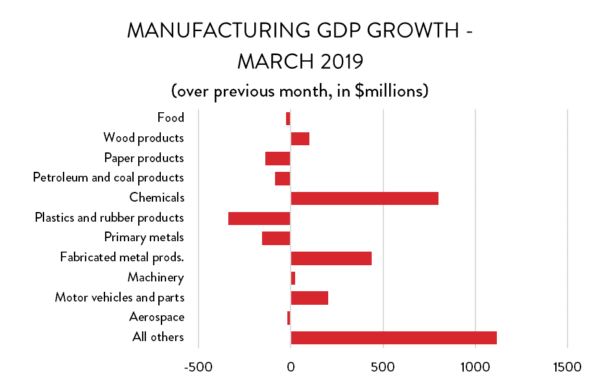 There were also significant gains in many of Canada’s smaller manufacturing sub-sectors. GDP in printing and related activity was up by $403 million. Computers and electronics activity was $329 million higher. And miscellaneous transportation equipment GDP was up by $236 million.

On the negative side, GDP in plastics and rubber products fell by $339 million, giving back all its gains since December. Value-added output was also down in paper industries as well as primary metals and non-metallic minerals.