Sputtering economy is cause for growing concern

Evidence continues to mount that the economy is struggling. If recent downward trends continue into the next couple of months, conversations are going to shift to talk of recession in Canada. 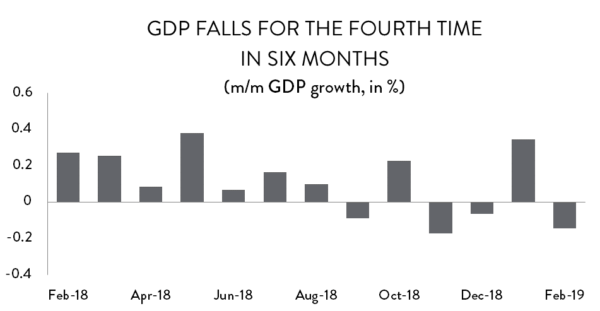 February saw GDP decline for the fourth time in six months, driven lower by weakness in the mining sector. The national economy shrank by 0.15 per cent – equivalent to an annualized decrease of about 1.7 per cent. The good news is that that decline came after an unusually strong January – one that saw GDP grow by about 4.2 per cent on an annualized basis (revised downward from initial estimates of 4.3 per cent). 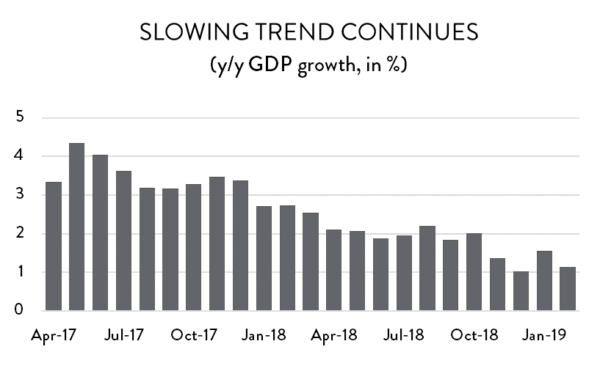 Canada’s recent economic performance stands in sharp contrast to what’s going on south of the border. Preliminary estimates for the US economy suggest that GDP in that country grew by an impressive 3.2 per cent in the first quarter of 2019. While that estimate will likely be downgraded when the next round of revisions comes in, it remains true that the US economy is looking far stronger than our own.

On the whole, results at the industry level were mixed in February, as eight of the 15 major economic sub-sectors posted gains, while the remaining seven declined. However, there were significant losses in a few key industries that drove the overall economy into negative territory. The largest decline was in non-renewable resource extraction, where value-added output plunged by $2.3 billion – equivalent to an annualized decrease of nearly 18 per cent. In recent times, steep declines in that sub-sector can be pinned on weakness in the energy sector. This time, however, it was mining that drove losses; GDP in coal, metals and non-metallic minerals mining were all sharply lower in February. 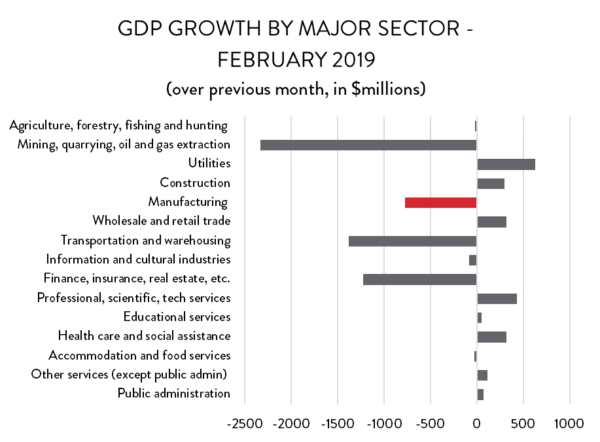 There were other notable declines as well. GDP in transportation and warehousing fell by $1.4 billion (17 per cent on an annualized basis), while finance, insurance, real estate and leasing businesses saw value-added output fall by $1.2 billion (3.8 per cent annualized).

After a massive spike to start the year, the manufacturing sector gave back some of those gains in February. GDP in manufacturing fell by an estimated $774 billion that month – equivalent to an annualized decline of about 4.4 per cent. 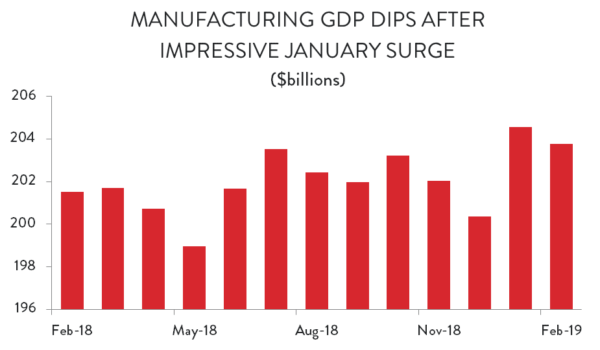 The good news is that with the release of new data, January’s spike was revised even higher. Last month, it was estimated that manufacturing GDP rose by 19.7 per cent on an annualized basis compared to December. That figure was upgraded to a spike of 28 per cent. As a result, even with the decline in February, manufacturing GDP remains at it second highest monthly level on record.

It also means that so far into 2019, the manufacturing sector is outpacing the Canadian economy as a whole. Through two months, GDP in manufacturing is tracking 1.6 per cent higher compared to the same period last year. By comparison, the all-industry average is about 1.4 per cent.

Although value-added in manufacturing was down in aggregate, results within the sector were mixed. On the positive side, GDP in machinery production surged by $934 million to reach a new all-time high. Fabricated metals ($487 million) and plastics and rubber products ($504 million) both rebounded in February after losses the previous month. Finally, GDP in petroleum and coal refining was up $383 million to reach its highest level since October 2017. 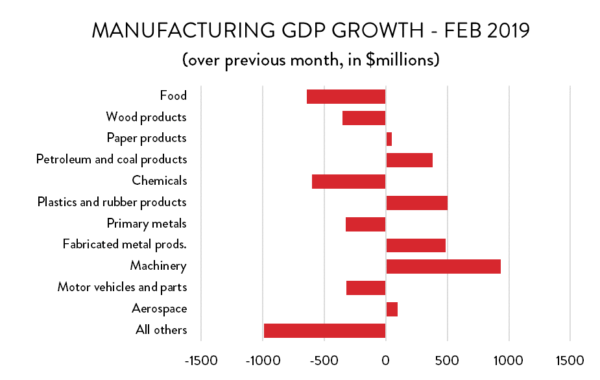 On the other end of the spectrum, most of the industries where manufacturing GDP was lower in February were the same ones which had experienced the sharpest increases the previous month. As such, February’s losses for the most part represent only a partial climbdown from January’s surge. That was true of food processing, chemical manufacturing and motor vehicles.

It was also true for many of Canada’s smaller manufacturing industries which had been a major source of strength in January. GDP was sharply lower in furniture and related manufacturing, computers and electronics and printing. In all cases, however, GDP remains higher than it was in December.