Strong export growth wipes out Canada’s trade deficit in May

After languishing for the better part of a year, the Canadian economy appears to be picking up again as solid export numbers for May add to the recent run of positive economic data coming out of Statistics Canada. 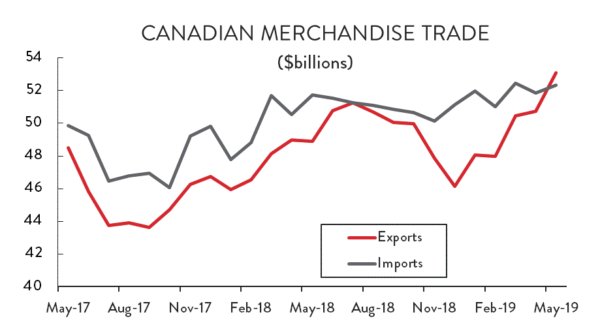 Widespread gains drove exports up by 4.6 per cent in May to reach a new all-time monthly high of $53.1 billion. That total is 8.6 per cent higher than it was at the same point last year – the strongest year-over-year export growth Canada has seen since October. As a result, with five months of data on which to report, Canadian exports so far in 2019 are tracking 5.0 per cent higher than they were over the January-May period last year. 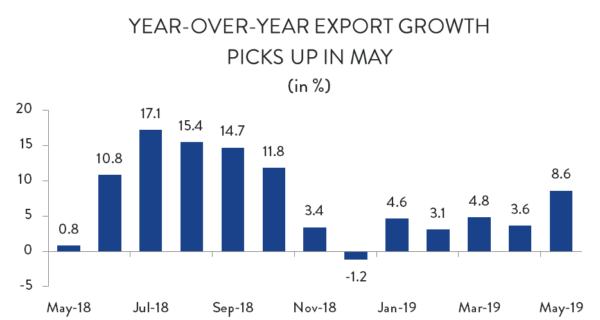 Canadians bought more foreign goods in May as well, but the increase was far smaller than exporters’ foreign market access gains. Imports into Canada were up by just under 1.0 per cent to reach $52.3 billion.

The surge in exports combined with modest import growth caused Canada’s monthly trade deficit to swing into surplus territory for just the second time since late 2016. Canada posted a $762 million trade surplus in May. On a year-to-date basis, Canada is looking at a $9.2 billion trade deficit so far in 2019. That represents a significant improvement over the $12.0 billion trade deficit recorded over the same time last year. 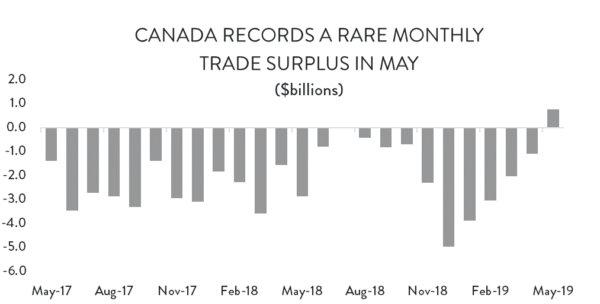 Adding to the good news for exporters, strong growth in May was largely the result of higher sales volumes. The volume of goods exported from Canada jumped by 4.0 per cent that month – its biggest increase in recent memory. That growth was supplemented by a 1.0 per cent increase in average export prices compared to April. 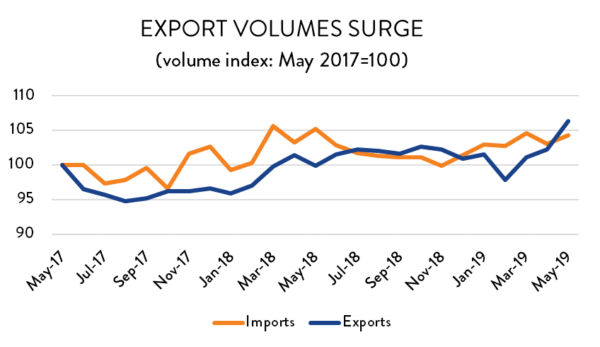 Meanwhile the volume of goods coming into Canada was higher as well. Import volumes were up by 1.2 per cent, while the average prices Canadians paid for those goods was unchanged from April.

As mentioned earlier, export gains in May were widespread as nine of the 11 broad product categories were higher compared to April. Leading the way on a dollar-value basis was exports of motor vehicles and parts, which were up by $922 million (12.4 per cent), reaching their highest level in two years. There was also a surge in exports from Canada’s aerospace sector where deliveries jumped by $726 million (33 per cent). Other notable gainers included the energy sector (up $519 million, or 5.0 per cent) and raw metals and minerals ($419 million, or 24.3 per cent). 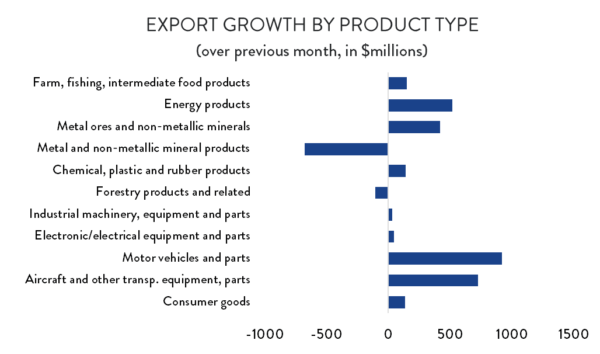 The only product category to see a significant decline was finished metal/mineral products, where exports fell by $678 million (11.8 per cent).  Even then, that decrease was because of exceptional circumstances and not weak market conditions. Gold exports – which are volatile from one month to the next – spiked in April, but returned to more normal levels the next month.

Canada’s export gains in May were concentrated in the United States. Exports to that country were up by 3.7 per cent compared to April – a dollar-value increase of more than $1.4 billion. The US accounted for about 60 per cent of Canada’s export growth that month. However, there were strong gains in a number of other markets as well. Exports to Saudi Arabia were up by $480 million, while there were solid increases in shipments to Japan ($167 million), South Korea ($166 million), the Netherlands ($143 million) and Switzerland ($115 million). 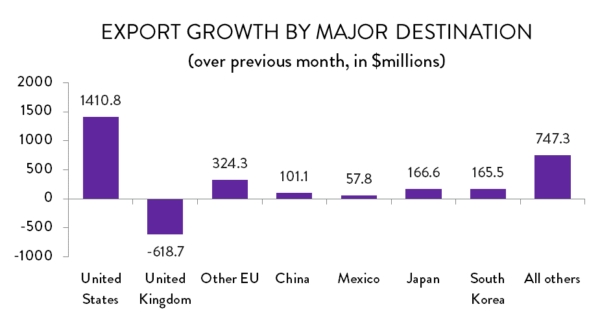 In spite of growing trade tensions with China, exports to that country were up by 4.6 per cent in May ($101 million). However, for 2019 to date, sales to China are 5.3 per cent lower than they were through the first five months of last year.

On the other end of the spectrum, exports to the United Kingdom were down sharply ($618 million). The UK is Canada’s primary destination for gold, so wide swings in precious metals exports almost always result in parallel trade movements with that country. Exports to Algeria ($133 million) and Indonesia ($130 million) were lower as well.

industrial goods. Imports of aerospace vehicles and parts were up by $279 million (14.2 per cent), while Canadians also bought more foreign motor vehicles and parts ($151 million) and electrical/electronic equipment ($137 million). 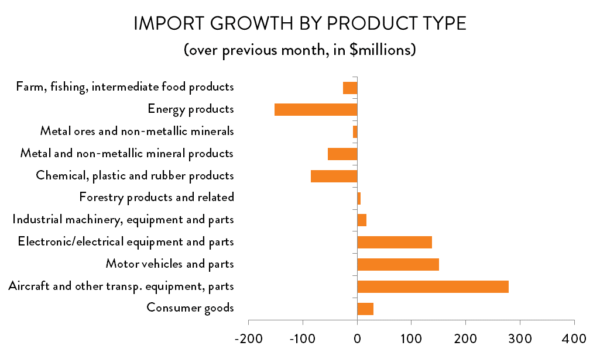 Those increases were muted by a decline in foreign energy coming into Canada; energy imports fell by $152 million. There were smaller decreases in imports of intermediate metal products as well as chemical products.

Canadians bought fewer goods from the United States and China in May. Imports from the US fell by $166 million (0.5 per cent), while those from China were down by $106 million (2.6 per cent).

Imports from most other major sources were higher in May. Deliveries from the EU were up by 2.6 per cent ($145 million), while Canadians also bought more goods from Saudi Arabia ($285 million), Norway ($130 million) and Russia ($61 million).