Canadian exporters started the year on the wrong foot. Merchandise exports fell by 2.0 per cent to $48.1 billion in January. Imports also fell, albeit by a more modest 0.5 per cent to $49.6 billion. In volume terms, exports fell an even steeper 3.1 per cent, while imports were also down 0.5 per cent. This disappointing release suggests that Canada’s trade sector was already on shaky ground prior to the rail blockades and coronavirus outbreak. 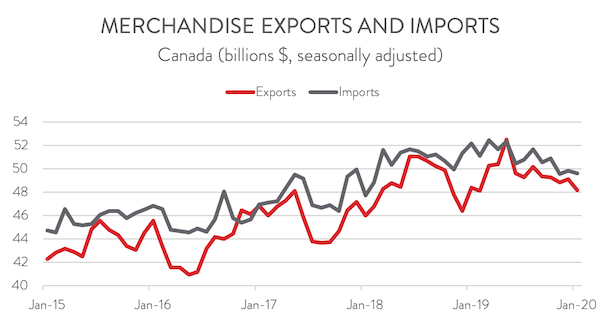 With exports falling more steeply than imports, Canada’s trade deficit widened from $732 million in December 2019 to $1.5 billion in January 2020. Canada’s trade surplus with the United States narrowed from $4.7 billion to $3.6 billion, the smallest surplus since February 2019. At the same time, our trade deficit with the rest of the world narrowed from $5.4 billion to $5.0 billion. 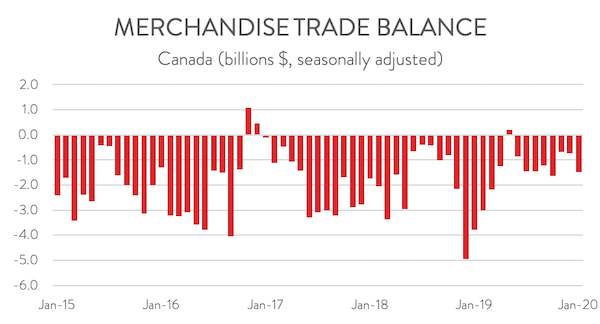 January’s fall in exports was broad-based, with 9 of 11 major sectors posting declines. The biggest decline was recorded in motor vehicle and parts, reflecting temporary shutdowns at assembly plants and the permanent closure of GM’s Oshawa facility. Energy products also fell on the month, as unseasonably warm weather drove down demand for natural gas in the United States. Aircraft and other transportation and parts was the other product type to post notably lower exports in January. Of the 11 major sectors, only farm, fishing and intermediate food products and metal and non-metallic mineral products posted export gains in January. 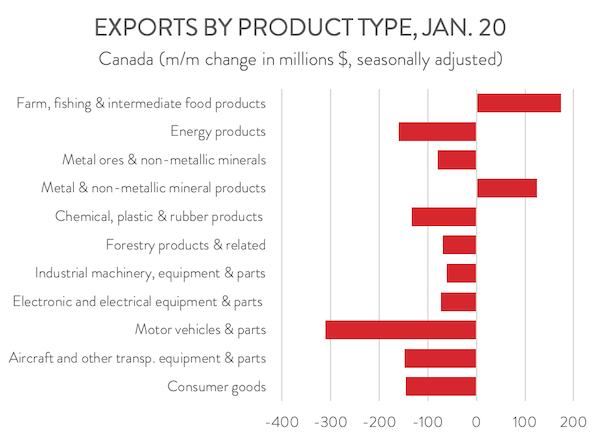 EXPORTS TO THE US FALL 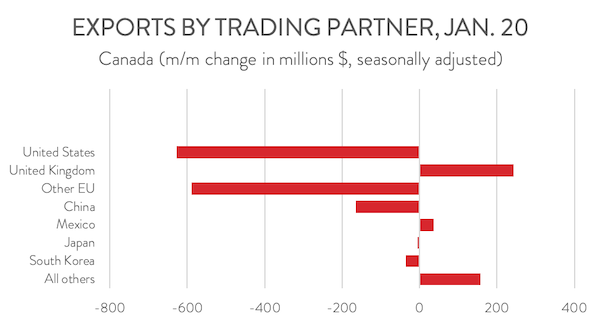 Employment increased by 30,300 in February, the third consecutive monthly increase. Over the past 12 months, the Canadian economy has generated about 245,000 jobs. The unemployment rate inched up 0.1 percentage points to 5.6 per cent, still indicative of a tight labour market. Accordingly, wage growth remained robust, with the average hourly rate increasing at a 4.1 per cent pace on a year-over-year basis in February.

Manufacturing employment also rose for the third straight month in February, with 16,000 workers added to payrolls. With this gain, employment levels are unchanged from 12 months ago. Despite the healthy employment advance, year-over-year wage growth in the industry decelerated sharply to 2.1 per cent in February, its slowest pace in over two years.

It is important to note that Statistics Canada conducted this survey between February 9th and 15th, near the beginning of the rail blockades and prior to when coronavirus fears began ramping up, so this report could be somewhat overstating the labour market’s health. We will know more about how employers are responding to the coronavirus when the March labour force survey report is released in early April. 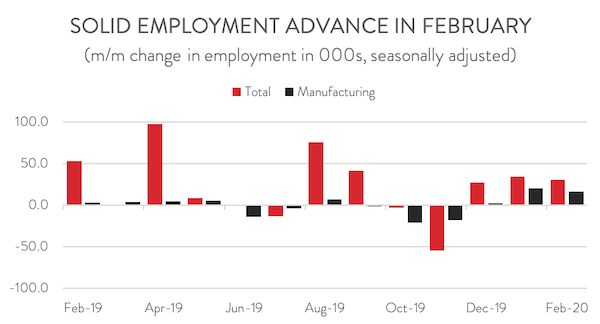 QUEBEC WAS CANADA’S HOT SPOT FOR JOBS IN JANUARY

Quebec boasted the strongest job gains in February, with employment climbing by 20,000. The province’s unemployment rate currently stands at a record low of 4.5 per cent. At the same time, Alberta employers added 11,400 workers to payrolls, the job market’s strongest performance in 10 months. Despite the gain, employment remains below year-earlier levels. Only two provinces recorded declines in February, with employment falling by 6,500 in BC and by 3,200 in Ontario.

The job gains in manufacturing were concentrated in Ontario, with its industry payrolls rising by 14,800. Alberta saw manufacturing employment rise by 2,900, while BC posted a decline of 4,300. Changes in other provinces were relatively more modest. 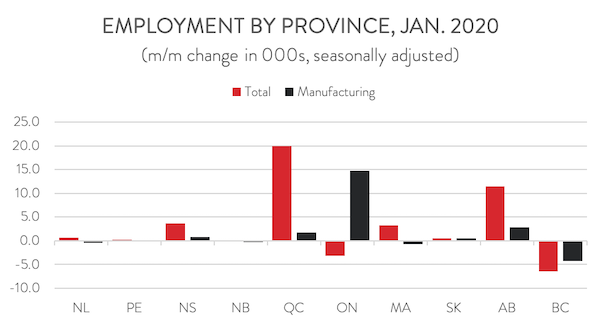