A spike in precious metals deliveries drove exports higher in April. With exports up three times in the past four months, Canada has almost fully recovered the ground lost in the final quarter of 2018.

All told, exports grew by 1.3 per cent in April, reaching a total value of $50.7 billion. That growth builds on a strong showing in March when exports rose by more than first thought; initial estimates of a 3.2 per cent increase in exports that month were revised upward to 4.4 per cent. With those increases, Canadian exports have almost fully recovered from their decline in the second half of 2018. Exports are just 1.1 per cent below their July peak. 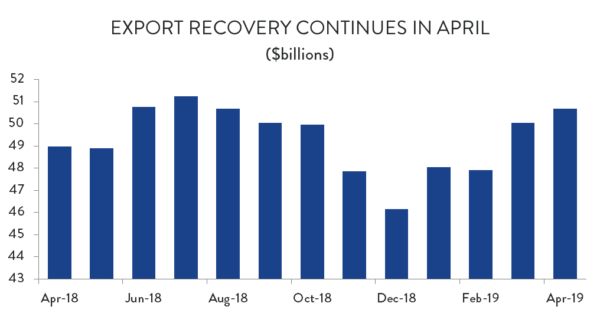 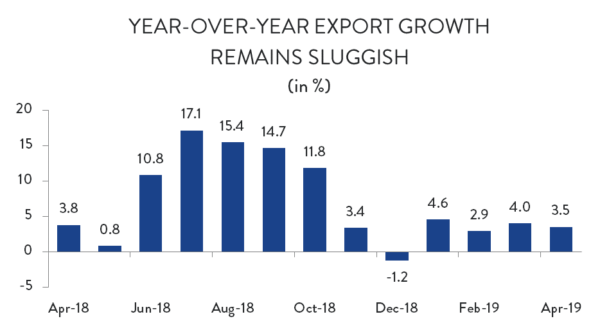 While they sold more goods abroad in April, Canadians purchased fewer foreign products that month. Imports were down 1.4 per cent compared to March, dropping to $51.7 billion. As a result, Canada’s merchandise trade deficit continued its recent narrowing trend. The trade deficit has shrunk in each of the last four months and now sits at just under $1.0 billion – its lowest level since October.

Movements in both exports and imports were driven by changing sales volumes as opposed to price movements. On the export side, volumes were up 2.0 per cent, while the average price exporters received for their goods fell by about 1.6 per cent. As for imports, volumes dropped by about 1.9 per cent, while a lower exchange rate helped drive import prices up by about 1.5 per cent. 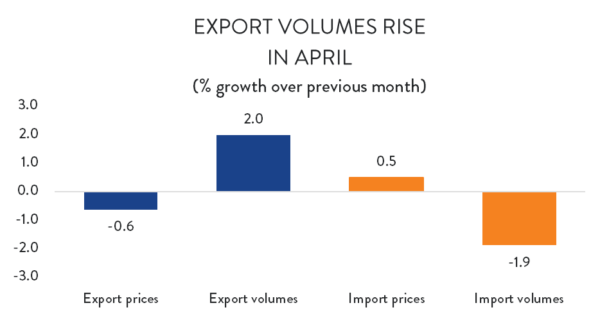 As mentioned earlier, export gains in April were largely driven by precious metals. Precious metals exports – which are typically volatile from one month to the next – jumped by more than 38 per cent in April. That increase (of about $660 million) accounted for just over 100 per cent of Canada’s export gains that month ($655 million).

Otherwise, it was a mixed bag – of the 10 other main product categories, five were higher and five, lower. On the positive side, higher wheat shipments drove agriculture exports up by 5.1 per cent ($163 million), while raw metals and minerals exports increased by 5.8 per cent ($92 million). On the negative side, motor vehicles and parts exports gave back almost all the gains made in March, falling by 4.6 per cent ($357 million). Meanwhile, weaker prices drove the value of energy and forest products lower.

Canada’s export gains in April were heavily concentrated in three markets: Hong Kong, the United States and China. Exports to Hong Kong spiked by about 66 per cent – an increase of nearly $500 million. Since Hong Kong is a major global port hub, that increase may not represent export gains in that specific market as much as a shift in the pattern of container deliveries. Exports to the US were up by just under 1.0 per cent ($349 million), while despite growing restrictions on imports of Canadian agricultural products, total sales to China were 5.5 per cent ($117 million) higher compared to March. 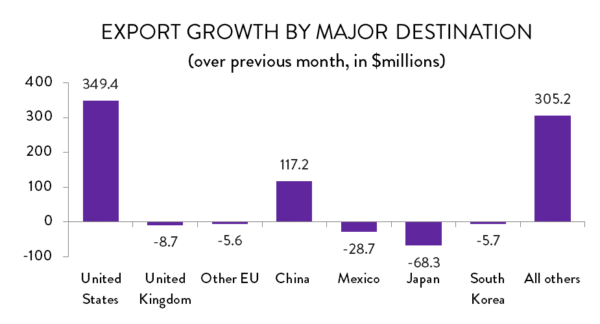 On the other end of the spectrum, exports to Saudi Arabia and Germany were down considerably in April. In both cases, however, the decrease represented a pullback from a spike in shipments in March.

The decline in imports into Canada was largely concentrated in finished industrial and consumer goods. On a dollar-value basis, the largest decline was in aerospace imports which were $574 million lower (24 per cent). Consumer goods imports fell by $325 million (3.0 per cent) on lower purchases of clothing and pharmaceuticals; and motor vehicles and parts imports were $305 million lower (3.1 per cent). 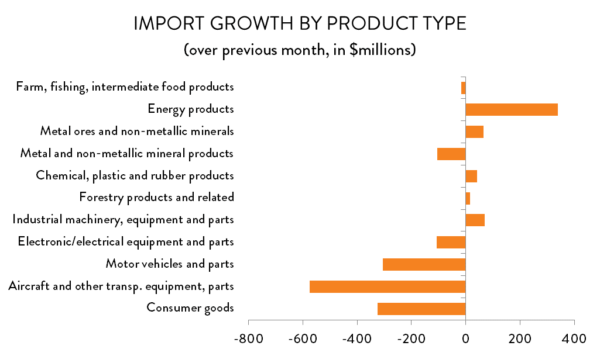 Meanwhile, eastern Canadians bought more crude oil to feed into the region’s refineries. That drove energy imports up by about 10.7 per cent ($339 million).

Canadians bought more goods from the United States in April; imports from that country were up 1.9 per cent compared to March ($641 million). However, they bought less from nearly everywhere else. After spiking in March, imports from China fell back significantly in April, dropping by $301 million (7.0 per cent). There were also notable declines in imports from Mexico, Japan, Norway and several countries in the EU.