The Canadian labour market roared back to life in November, with unambiguously positive numbers across the range of major employment indicators. This comes as welcome news for an economy that had been clearly slowing down in recent months. 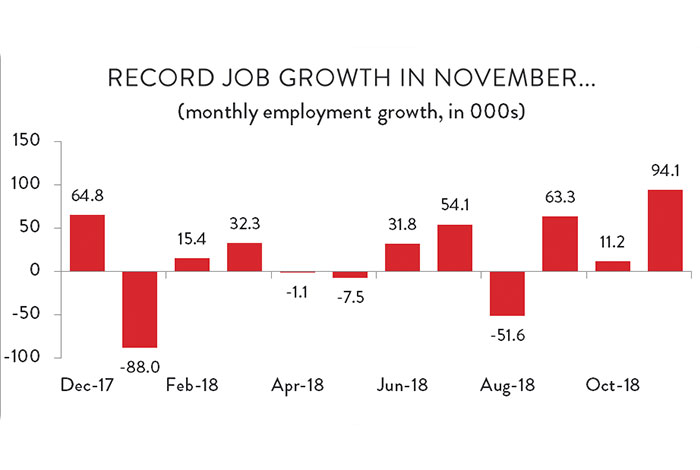 The Canadian economy added 94,100 net new jobs last month – a 0.5 per cent increase compared to October and the largest month-over-month increase in employment in more than 40 years (comparable data only go back to 1976). Improving job prospects also encouraged more Canadians to rejoin the labour market, driving the participation rate up slightly from 65.2 per cent in October to 65.4 per cent. That increase in labour force participation muted the drop in the unemployment rate, which nevertheless fell to 5.6 per cent – its lowest level in at least 40 years. 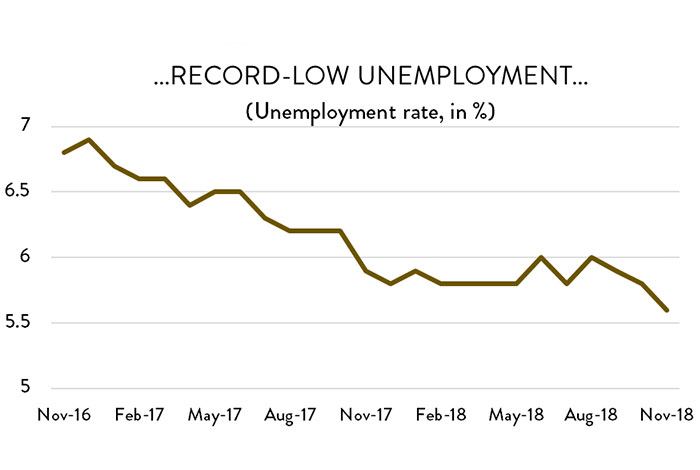 As it turns out, November was an unusually strong month for job creation in 2017 as well. As a result, last month’s surge did little to affect year-to-date employment growth. Through 11 months, employment is tracking about 1.3 per cent higher than it was last year. That represents a slowdown from the strong 1.8 per cent job growth in 2017 but is in line with growth over the 2010-2013 period. 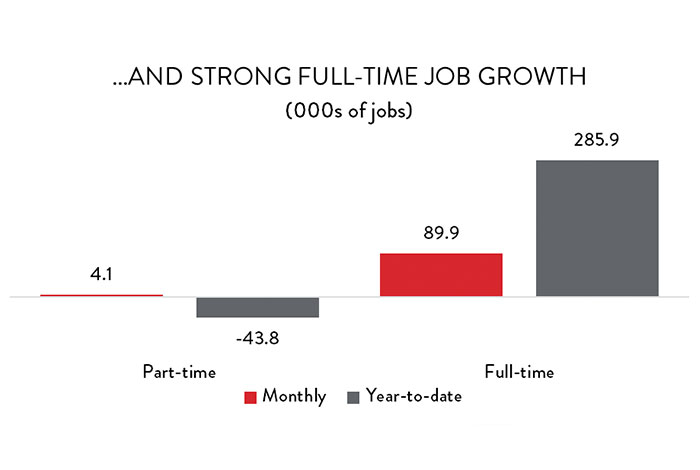 The one odd feature of November’s labour market data releases is that despite record employment growth, a record-low jobless rate, and widespread reports of businesses struggling to find workers, wage growth remains stubbornly weak. Average hourly wages were effectively unchanged in November and year-over-year wage growth has been decelerating since May. Average wages are about 1.7 per cent higher today than they were 12 months ago. That’s comfortably below the present rate of inflation, which sat at 2.4 per cent in October. In other words, real wages are falling even as labour markets tighten. 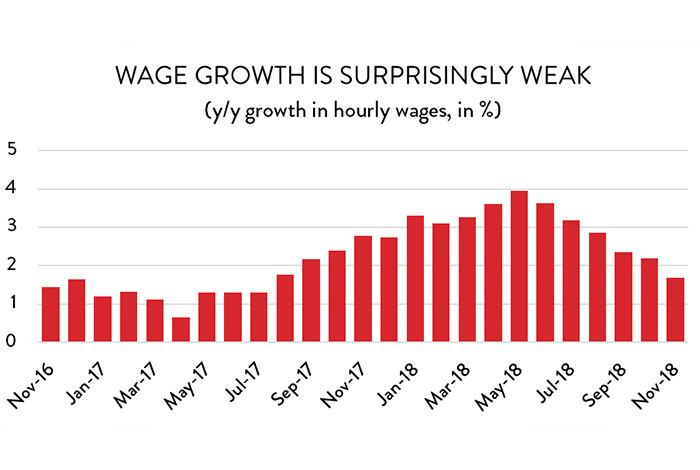 November’s job gains were concentrated in central and western Canada. For the second month in a row, Quebec led all provinces in raw job creation, adding 25,800 net new jobs last month (an increase of 0.6 per cent). That growth is welcome news in a province where employment has languished for much of 2018. Despite the addition of 34,900 jobs in the last two months, employment in Quebec remains below its December 2017 peak. 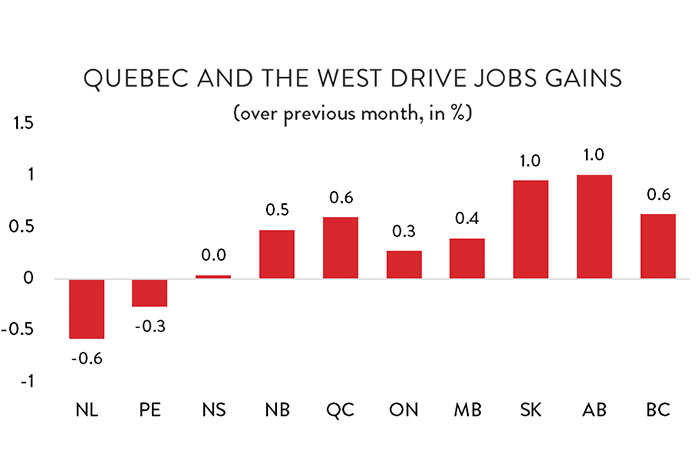 November was also a good month in Alberta, which added almost as many jobs as Quebec (23,700), but on a much smaller base. Employment in that province jumped 1.0 per cent compared to October. There were equally strong job gains in Saskatchewan, while BC and New Brunswick also posted solid growth. Only PEI and Newfoundland and Labrador saw employment levels decline last month.

The news at the industry level was almost universally positive. Of the 16 broad industry groupings, 13 posted higher jobs numbers in November. About 28 per cent of the new jobs created last month were in goods-producing industries, led by construction (14,800 net new positions) and agriculture (7,000 jobs). On the services side, there were 26,000 jobs created in professional, scientific and technical services industries, while business services added another 14,000 jobs. There were also solid gains in health care and social assistance (18,700 jobs). The only losses came in information, culture and recreation services (10,400 jobs lost); finance, insurance and real estate-related industries (4,500 jobs) and education services (1,700 jobs). 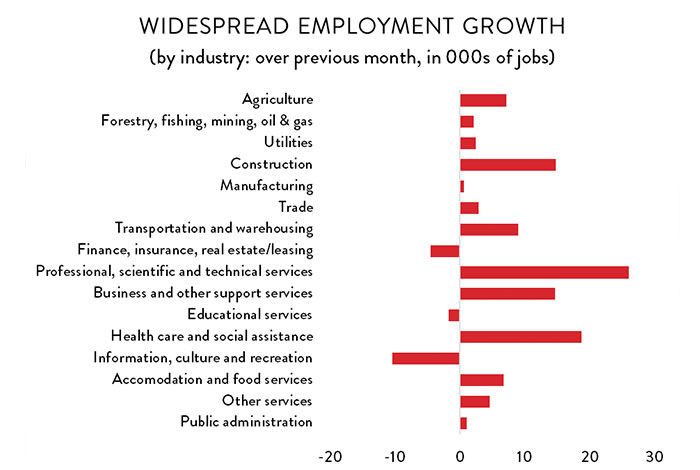 While overall employment growth soared in November, it was a much more subdued month for the manufacturing sector. Manufacturers added just 600 net new jobs last month – a negligible increase on a base of 1.72 million workers.

The good news is that manufacturing employment appears to be stabilizing after falling steadily for much of the year. There were 43,700 manufacturing jobs lost across the country from January through August. Since August, about 5,400 of those positions have been regained. 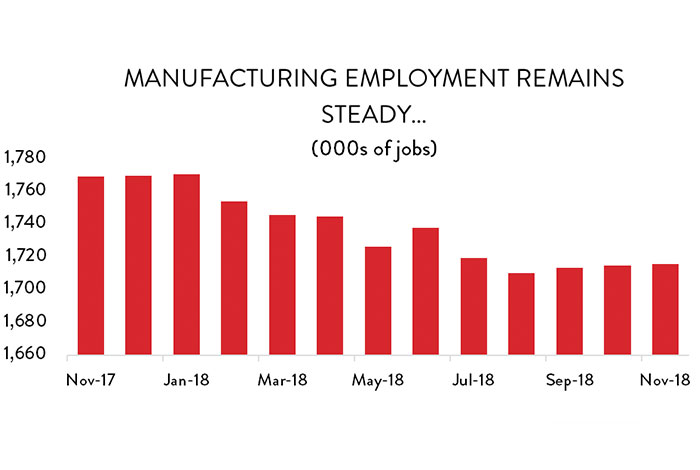 While job creation is slow, manufacturing labour markets remain exceptionally tight. The unemployment rate in manufacturing sat at 3.3 per cent in November, unchanged from the previous month. As labour and skills shortages rise, manufacturers are facing stronger wage pressures than their counterparts in other industries. Manufacturing wages are 3.4 per cent higher than they were 12 months ago, compared to 1.7 per cent for the economy as a whole. 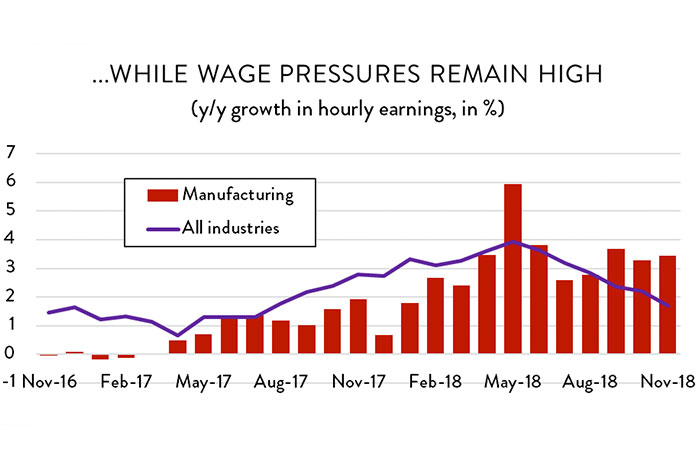 November’s manufacturing job gains were concentrated in Quebec and Alberta. Quebec manufacturers added 5,600 net new positions (a 1.2 per cent increase), while Alberta businesses hired 4,300 more workers (a 3.4 per cent increase). Nova Scotia and New Brunswick also made strong gains that month. The downside is that in all cases, those increases represented the partial recovery of recent job losses. Those job gains were largely offset by declines in Ontario (6,000 jobs) and BC (2,300). Manufacturing employment was also lower in the other two Atlantic provinces and the other two prairie provinces. 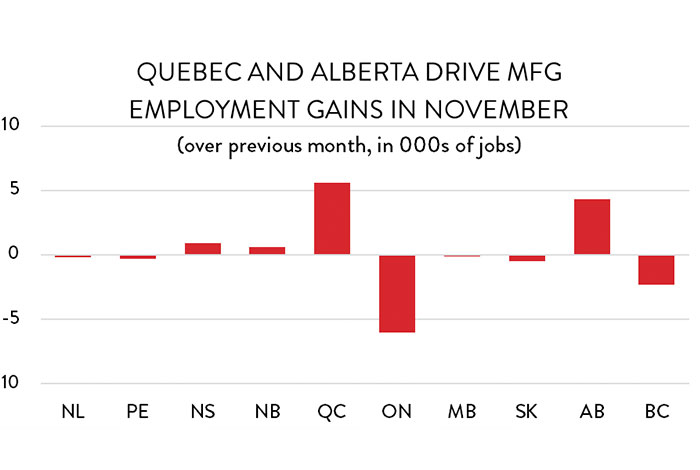