The gradual easing of COVID-19 restrictions, along with unprecedented fiscal and monetary stimulus, continues to help Canadians return to work. Employment rose by 418,500 in July, building on similarly large gains in May and June. Over the past three months, the Canadian economy has recovered 1.66 million or 55 per cent of the 3 million jobs lost over March and April. 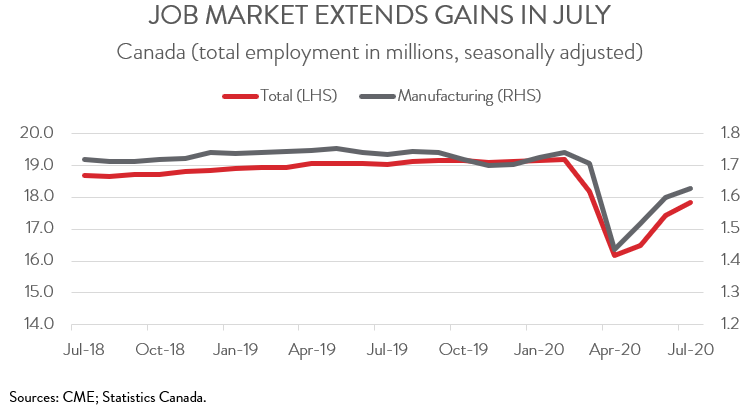 The pace of the recovery continues to be somewhat sharper in manufacturing. Following cumulative jobs gains of 160,400 in May and June, employment in the sector rose by an additional 29,300 last month. Accordingly, the manufacturing workforce has recovered 63 per cent of the 300,000 jobs lost during March and April.

This was another step in the right direction for Canada’s labour market, with July marking the third consecutive month of strong job creation. But with COVID-19 still circulating and preventing important segments of the economy from operating at full capacity, recovering the remaining 1.34 million jobs lost over the recession will be a much greater challenge.

Hours worked climbed 5.3 per cent in July, extending the cumulative 16.7 per cent increase seen over May and June. With these gains, hours worked have recovered about 60 per cent of the March and April losses. Accordingly, the “labour underutilization rate”, which combines those who were unemployed, those who were not in the labour force but who wanted a job and did not look for one, and those who were employed but worked less than half of their usual hours for reasons likely related to COVID-19, continues to decline. Less than one-quarter of the potential labour force was underutilized in July, down from more than one-third in April. That said, this is still well above the February rate of 11.2 per cent.

Just as with employment, hours worked in the manufacturing sector continue to recover at a faster pace than that of the overall economy. After increasing by a total of 24.9 per cent over May and June, hours worked in the sector rose a further 3.6 per cent in July, and now have recouped over 70 per cent of the pandemic losses. 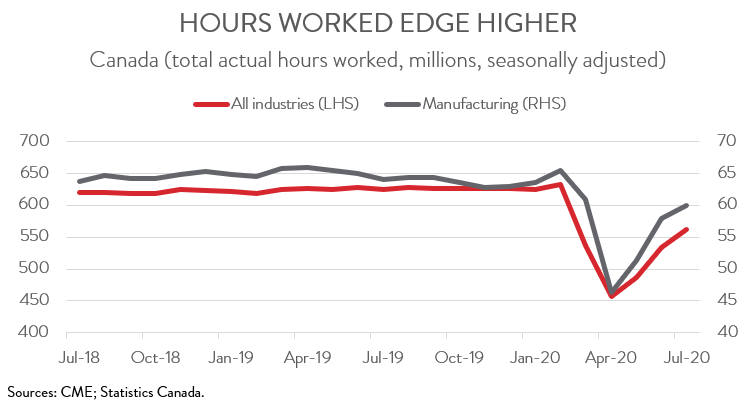 After peaking at 13.7 per cent in May, the unemployment rate continues to move lower, falling to 10.9 per cent in July. However, there is still a long way to go to return to pre-pandemic levels. The jobless rate stood at 5.6 per cent in February.

The unemployment rate in manufacturing plunged in July, falling to 7.3 per cent, down substantially from a peak of 13.6 per cent in April. As with the all-industry average, this is still a far cry from February’s pre-pandemic rate of 4.1 per cent. 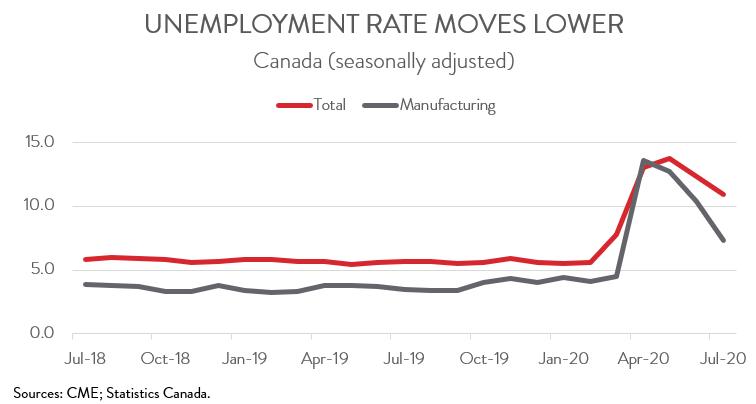 Employment rose in every province except New Brunswick last month. Ontario posted the largest gain for the second month in a row, adding a little more than 150,000 workers to payrolls in July. This brought the province’s employment to 91.7 per cent of its February level. At the same time, Quebec employment climbed by 97,600, pushing employment up to 94.4 per cent of its pre-COVID level. Job creation was also strong in BC and Alberta, coming in at 70,200 and 67,300, respectively. Although employment contracted in New Brunswick, the damage was limited to just 1,800 job losses. Also, despite this decline, the province remains the closest to fully recouping its COVID-19 job losses. Employment in July was 96.6 per cent of its February level.

The job gains in manufacturing were also broad-based, spanning 9 of 10 provinces. BC led the way with a net addition of 7,300 jobs, followed by Ontario which added 5,800 net new workers. Sectoral employment increases in the remaining provinces were more moderate, ranging from 3,000 in Quebec to 200 in Nova Scotia. On the negative side, manufacturing employment in Newfoundland and Labrador dipped by 1,000. 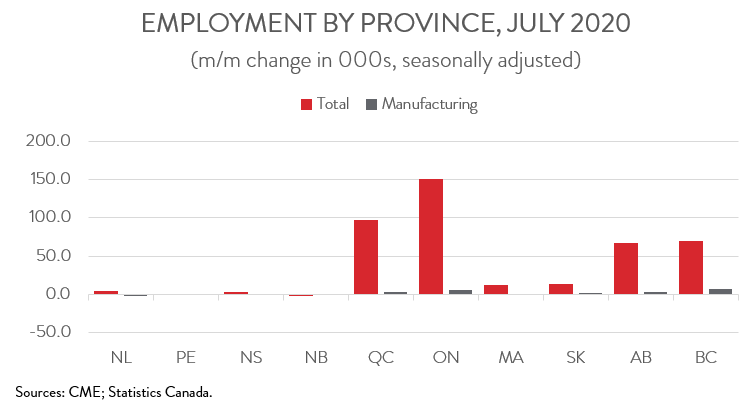