Employment fell 207,100 (-1.1%) in April, as several provinces tightened public health measures amid a third wave of COVID-19. This followed cumulative job gains of 562,300 over the previous two months. The decline in April left employment 503,100 or 2.6% below the pre-pandemic level. 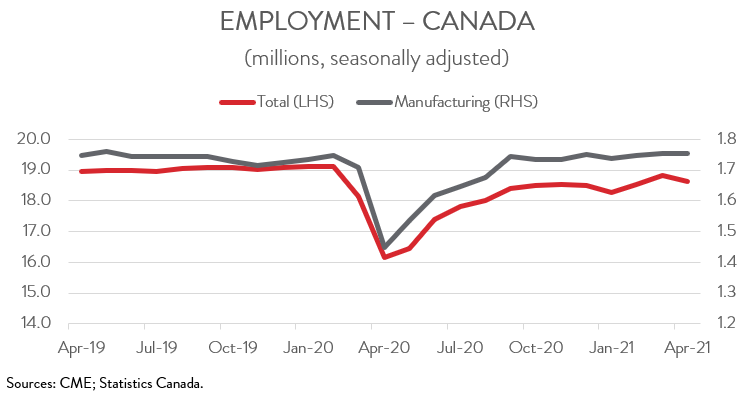 The hit to Canada’s job market in April was expected, as it coincided with enhanced public health measures in many provinces. While we might not see much of an improvement in labour market activity in May, a gradual decline in the number of new daily COVID-19 cases and an acceleration in vaccinations suggest that June and the following months will bring much brighter days.

Employment losses were once again concentrated in industries most affected by physical distancing measures, namely retail trade (-84,000), accommodation and food services (-59,200), and information, culture, and recreation (-26,200). Employment also declined on a seasonally adjusted basis in educational services (-35,800), largely the result of Ontario pushing back the spring break from March to April. As well, the construction sector shed 12,700 jobs last month, following a weather-aided boost in March.

In contrast, three industries whose workers are largely able to work from home experienced the biggest job gains in April: public administration (+15,300), professional, scientific and technical services (+14,900), and finance, insurance and real estate (+14,500). Employment in all three of these sectors is above pre-COVID levels. 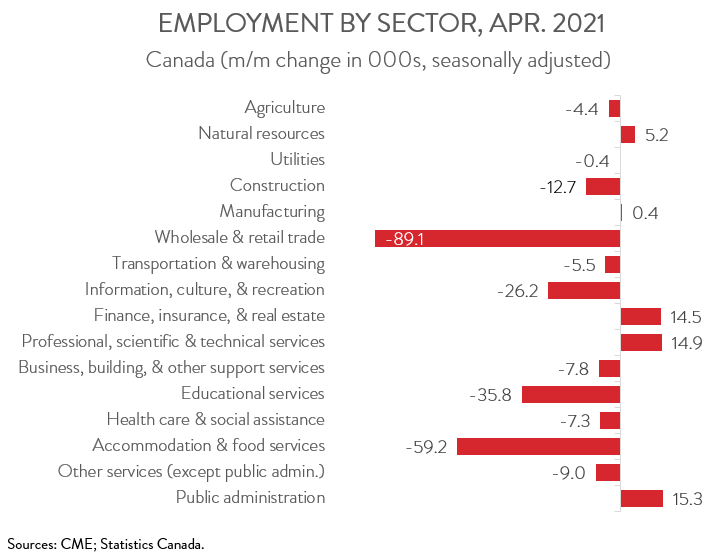 Employment changes elsewhere were more modest, including in manufacturing. In fact, manufacturers added just 400 workers to payrolls in April. This left the sector’s employment at 1.76 million, 0.5% above the pre-pandemic level.

The unemployment rate rose from 7.5% in March to 8.1% in April, the first increase in three months. Meanwhile, the jobless rate in the manufacturing sector inched down from 5.2% to 5.1% over the same period. 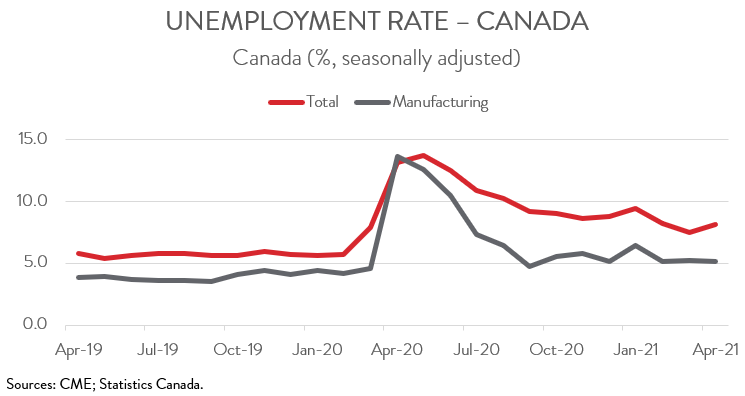 The job losses spanned 7 of 10 provinces, with Ontario and B.C. bearing the brunt of the decline. Following two consecutive monthly gains, employment in Ontario fell 152,700, owing largely to a province-wide stay-at-home order issued on April 8. Along with notable declines in high-contact service sectors, educational services also saw a significant fall due to the delayed spring break.

Similarly, B.C. introduced “circuit breaker” restrictions on March 30. Largely as a result, employment declined by 43,100 in April, the province’s first decline since substantial job losses last spring. Stricter public health measures were also reinstated in Quebec, where 13,300 workers lost their jobs during the month. Employment was also down in Alberta (-12,600) in April.

At the other end of the spectrum, Saskatchewan (+9,500), New Brunswick (+4,100), and Manitoba (+3,200) were the only provinces that recorded job growth last month. For both prairie provinces, this was the fourth straight monthly gain.

In manufacturing, employment gains were concentrated in Western Canada. Alberta led the way, adding 7,100 workers to payrolls. This was followed by B.C., which created 4,900 manufacturing jobs, and Saskatchewan, which saw employment in the sector rise 2,600.

The gains in those three provinces helped to offset notable manufacturing job losses in Ontario (-10,100) and Quebec (-8,900). This was the third time in four months that manufacturing employment fell in Ontario, while it was the first decline for Quebec since last October. 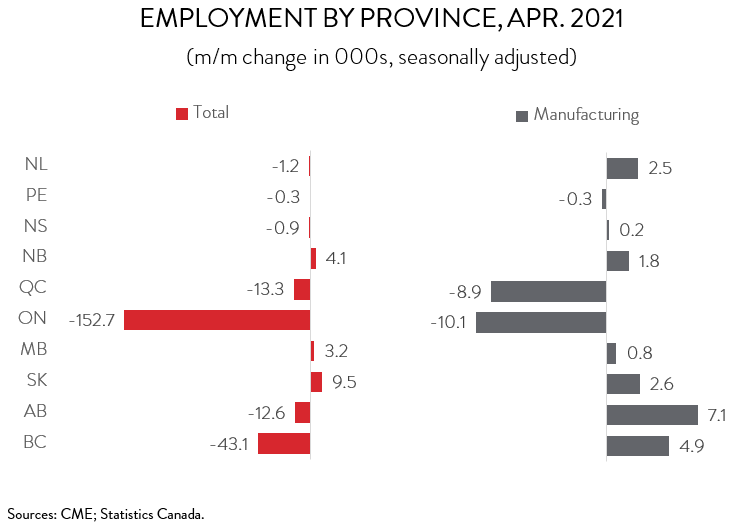