ECONOMY ADDS JOBS FOR SECOND MONTH IN A ROW

Employment rose by 94,000 (+0.5%) in July, building on the 230,700 jobs created in June. The two consecutive months of growth brought employment to 246,400 (-1.3%) below the February 2020 level. The job gains in July were predominately in full-time work and were concentrated in the services sector. Accommodation and food services was the job growth leader, with employment increasing by 35,200. 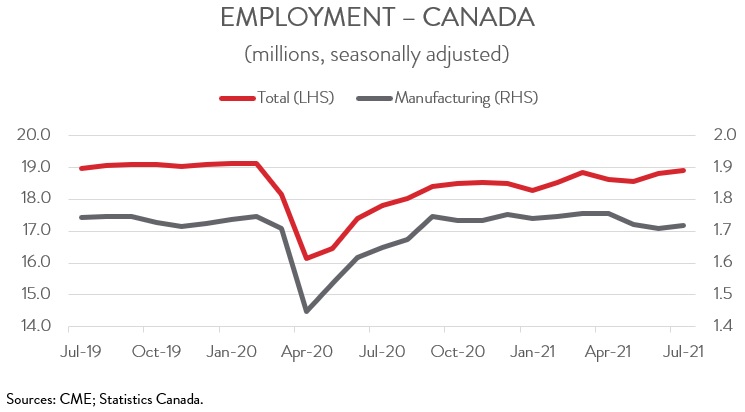 For the second month in a row, the loosening of public health restrictions drove hiring activity across the country. While this was another step toward a full recovery for Canada, concerns around the SARS-CoV-2 Delta variant threaten to delay a full economic reopening.

After falling for two months in a row, manufacturing employment increased by 8,800 in July. With this gain, employment in the sector was 1.8% or 30,800 below the pre-pandemic level.

The headline unemployment rate continues to trend downward. The jobless rate fell from 7.8% in June to 7.5% in July, well below the recent peak of 9.4% in January.

The manufacturing sector labour market is tightening quickly. The sector’s unemployment rate dropped from 4.6% in June to 3.9% in July, the lowest level since September 2019. 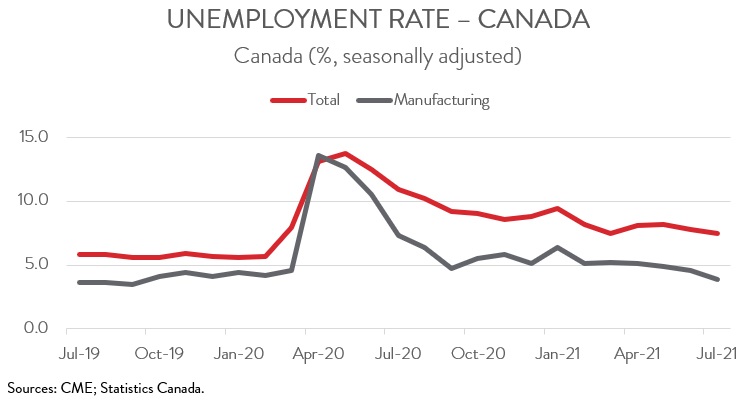 The tight labour market conditions in the manufacturing sector are consistent with anecdotal evidence of manufacturers having trouble filling vacant positions. According to Statistics Canada’s Job Vacancy and Wage Survey, there were over 52,000 job vacancies in the manufacturing sector in the first quarter of 2021, well above the 42,000 positions that were available in the first quarter of 2020.

Somewhat surprisingly, these tight conditions have yet to be reflected in the wage data. In July, the average hourly wage rate in manufacturing was $28.72. This was up just 0.3% month-over-month and down 0.7% year-over-year. 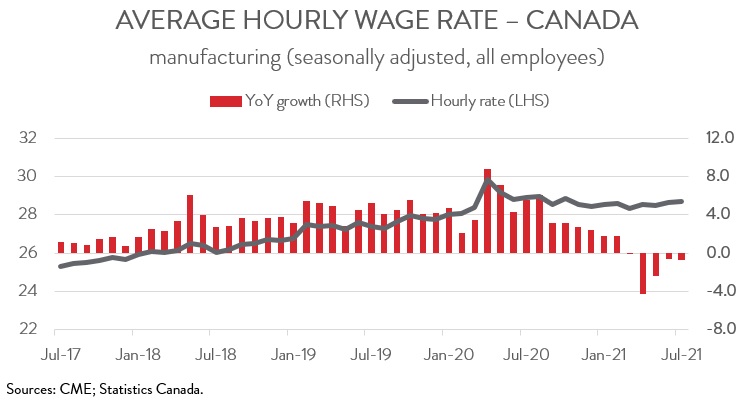 The job gains spanned 6 of 10 provinces. Ontario added the most jobs in July, with employment rising by 72,400. Manufacturing drove the gains, with the number of people who worked in the sector increasing by 26,000, fully erasing the job losses recorded in the spring. Accommodation and food services and wholesale and retail trade also posted gains.

After increasing by 72,300 in June, employment in Quebec rose by a more modest 7,500 in July. The job gains in July were concentrated in the services-producing industries. In contrast, goods sector employment was down last month, headlined by 10,800 job losses in manufacturing.

Elsewhere, employment increased by 7,400 in Manitoba, thanks mainly to gains in accommodation and food services and in information, culture and recreation. Nova Scotia added 3,700 workers to payrolls, with the bulk of the gains coming in health care and social assistance. PEI saw employment rise by 1,100 in July, largely offsetting the 1,400 job losses recorded in the previous month.

On the negative side, Saskatchewan shed 4,500 workers in July, with wholesale and retail trade accounting for nearly half of the losses. This was the province’s second straight monthly employment decline.

Employment was also down in BC (-3,100) in July, as job gains in the services sector were more than wiped out by losses on the goods side. In particular, the manufacturing sector cut payrolls by 10,900 last month, the third straight monthly decline. 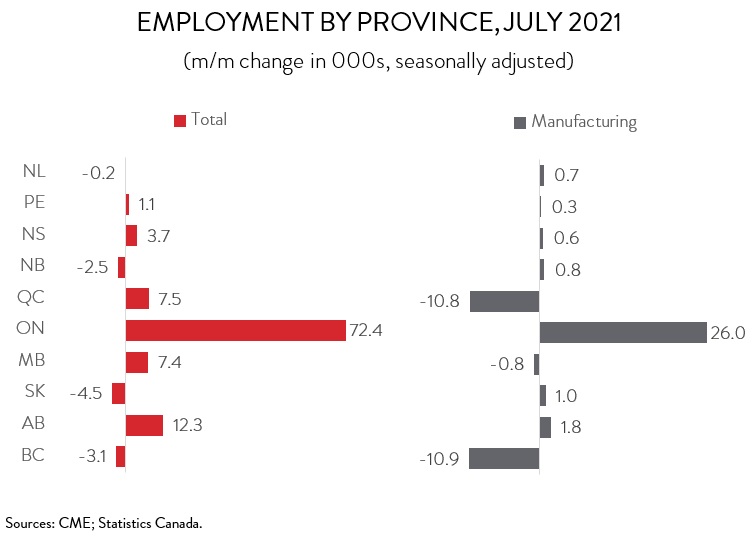