Employment rose by 90,200 (+0.5%) in August, building on the cumulative 324,700 jobs created over June and July. The three consecutive months of growth brought employment to within 156,000 (-0.8%) of its February 2020 level, the closest since the onset of the pandemic. Employment gains were concentrated in full-time work and were mainly in the services-producing industries. Accommodation and food services was the job growth leader, with employment up 74,600. 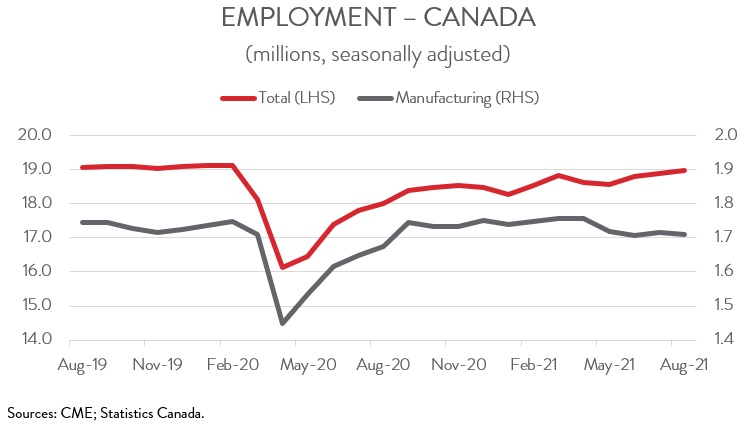 Canada’s job market sizzled over the summer, with provinces rolling back public health restrictions as vaccination rates increased and COVID-19 cases declined. While the job market is trending toward a full recovery, the Delta variant-fueled fourth wave suggests that the fall could be much bumpier. As well, the pandemic has compounded labour shortages in certain sectors, which could further constrain growth.

MANUFACTURING EMPLOYMENT DOWN FOR THIRD TIME IN FOUR MONTHS

Manufacturers cut 5,800 jobs last month, the third decline in four months. In fact, manufacturing employment is down by 45,000 since May. While the monthly labour force data are not detailed enough to reveal the underlying causes of this slump, surely the global semiconductor shortage that has plagued auto makers this year is a major factor.

UNEMPLOYMENT RATE HITS LOWEST POINT SINCE THE ONSET OF THE PANDEMIC

The headline unemployment rate fell from 7.5% in July to 7.1% in August, while the unemployment rate in manufacturing declined from 3.9% to 3.5% over the same period. For both indicators, this is the lowest rate since the onset of the pandemic. 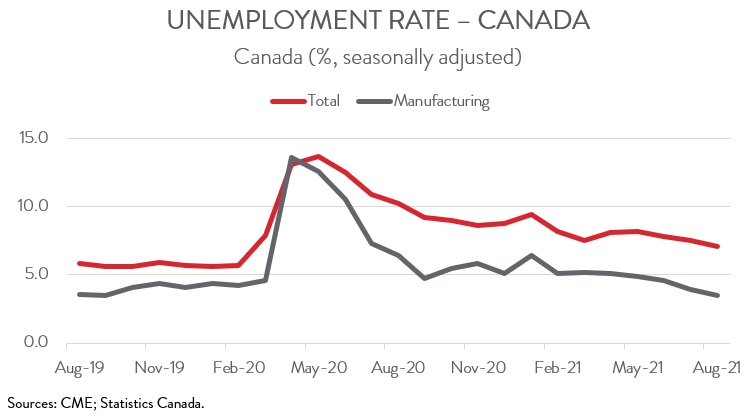 WAGE GROWTH IN MANUFACTURING UP 0.1% ON THE MONTH

The manufacturing sector is clearly facing tight labour market conditions. This is reflected in today’s report, as well as in job vacancy data and anecdotal evidence of manufacturers having trouble filling vacant positions. Yet, these tight conditions have yet to be reflected in the wage data. In August, the average hourly wage rate in manufacturing was $28.74. This was up just 0.1% month-over-month and down 0.7% year-over-year. 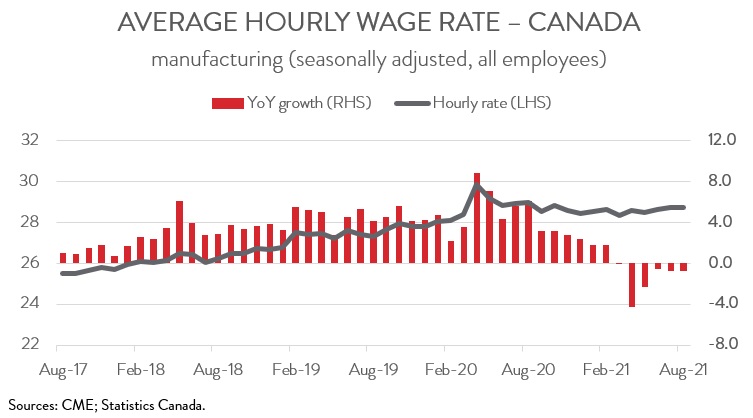 ONTARIO ADDS MOST JOBS IN AUGUST

The job gains spanned 7 of 10 provinces. Ontario added the most jobs in August, with employment rising by 53,000. Job creation was driven by part-time work, with accommodation and food services accounting for the bulk of the gain.

After increasing by 12,300 in July, employment in Alberta increased by a further 19,500 in August, with last month’s gain led by transportation and warehousing.

Employment was also up in BC, as the province’s employers added 14,400 workers to payrolls. For the third consecutive month, BC was the lone province with employment above its pre-pandemic level.

Other notable job gains were recorded in Saskatchewan (+10,100) and in Nova Scotia (+3,900), while the only decline of note occurred in Quebec, where employment was down 11,000. This was Quebec’s first drop in employment since May 2021.

In the manufacturing sector, employment was down in 5 of 10 provinces. The job losses were concentrated in Ontario, as manufacturers shed 21,000 workers. This was the largest monthly decrease since April 2020 during the height of the first wave of the pandemic. Despite this decline, manufacturing employment in Ontario remained slightly above its pre-pandemic level. 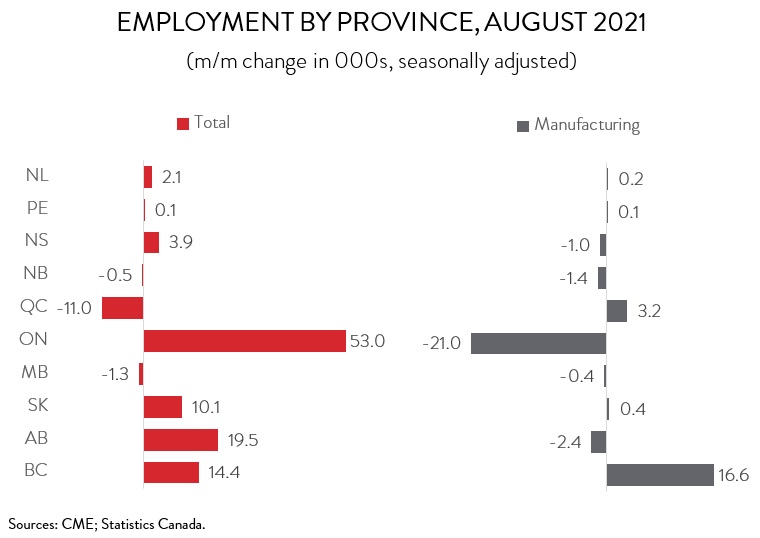