The Canadian economy added 157,100 jobs in September, bringing employment back to pre-pandemic levels for the first time. In more good news, the increase in employment was concentrated in full-time work. The services sector led the way, accounting for 90% of the jobs created. Public administration was the growth leader, reflecting election-related hiring, with employment up 37,200. 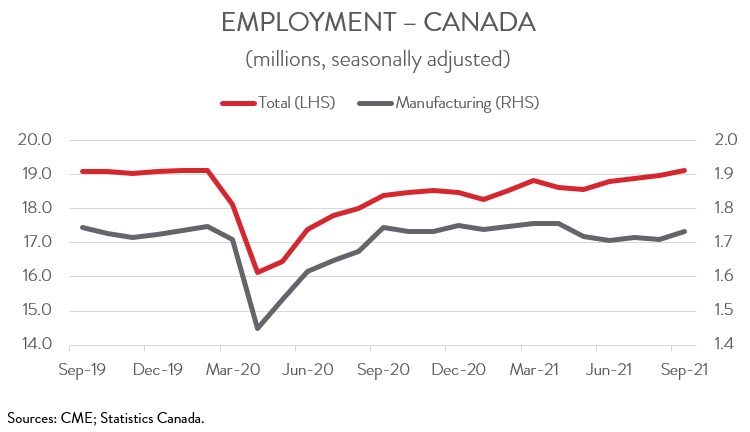 While it is worth applauding the job market’s return to pre-pandemic levels, it is too soon to crack open the champagne. The population has continued to increase during the pandemic, so there is still slack to be absorbed. Indeed, the employment rate, defined as the proportion of the population aged 15 and older that was employed, was 60.9% in September, 0.9 percentage points lower than in February 2020. As well, there were nearly 400,000 long-term unemployed in September, more than double the number before the start of the pandemic. Finally, total hours worked were still 1.5% below their pre-COVID levels.

Manufacturers added 22,100 workers to payrolls in September, the biggest increase since last September. The hiring last month brought employment to within 14,500 jobs or 0.8% of pre-pandemic levels. Manufacturing was the lone goods-producing sector to record a significant increase in employment.

UNEMPLOYMENT RATE HITS LOWEST POINT SINCE THE ONSET OF THE PANDEMIC

The headline unemployment rate fell from 7.1% in August to 6.9% in September, the lowest point since the onset of the pandemic. In contrast, the unemployment rate in manufacturing rose from 3.5% to 4.5%, the biggest one month increase since January. 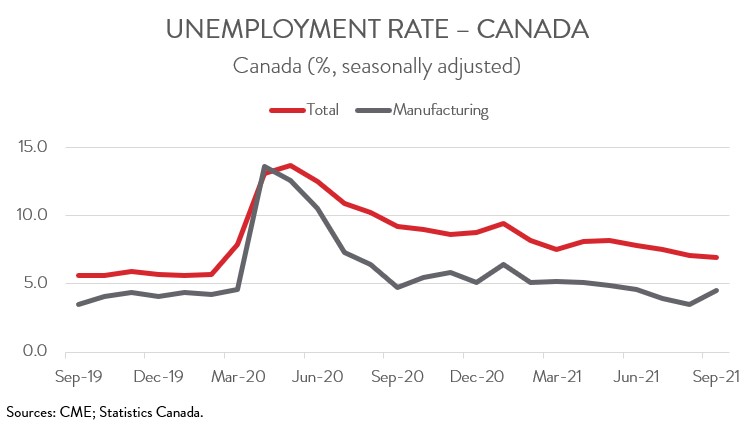 Despite last month’s increase in the unemployment rate, most data indicate that labour market conditions in manufacturing remain tight. As one example, job vacancies climbed to 65,900 in the second quarter of 2021, while the job vacancy rate reached 4.2%, both record highs. These tight conditions finally appeared to fuel wage growth. The average hourly wage rate in manufacturing increased from $28.74 in August to $29.17 in September, up 1.5% month-over-month and 2.2% year-over-year. 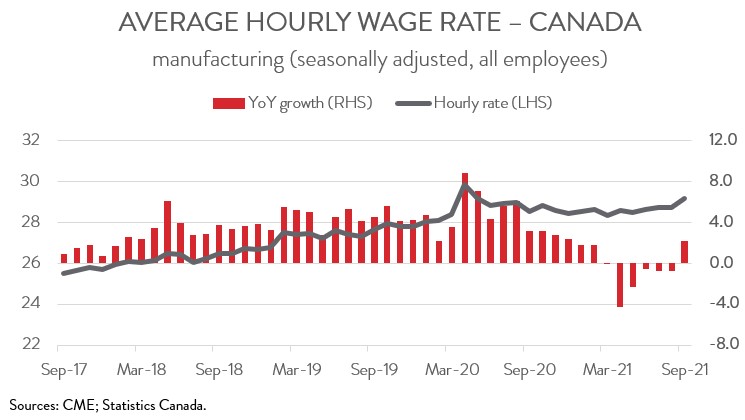 ONTARIO ADDS THE MOST JOBS IN SEPTEMBER

The job gains were widespread, spanning 9 of 10 provinces. Ontario added the most jobs for the second straight month, with employment rising by 73,600 in September. All the new jobs had full-time hours.

Employment in Quebec rose by 31,200 in September after holding relatively steady over July and August. Gains were led by manufacturing, followed by professional, scientific and technical services.

Employment was up 19,600 in Alberta, the third consecutive monthly increase. Wholesale and retail trade accounted for most of last month’s gains.

BC’s employers added 12,300 workers to payrolls in September, building on 14,400 jobs created in August. BC was the lone province with employment significantly above its pre-pandemic level.

Other notable job gains were recorded in Manitoba (+7,800), in New Brunswick (+6,100), and in Saskatchewan (+5,300). Newfoundland and Labrador was the only province to see employment fall, albeit only by a modest 800 jobs.

In the manufacturing sector, employment was up in 7 of 10 provinces. Quebec accounted for almost all the increase, with employment rising by 23,500. The gains elsewhere were more modest, including in BC (+2,100) and in Saskatchewan (+1,900). 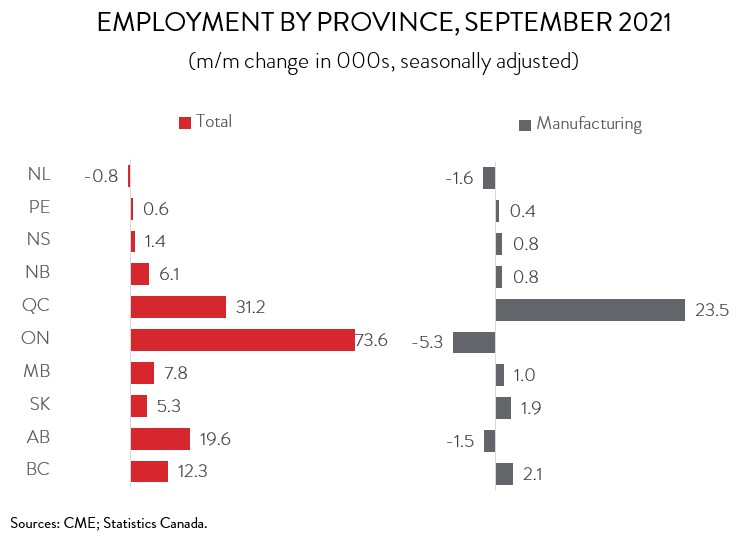