Total employment rose by 54,700 (+0.3%) in December. The increase was driven by full-time employment (+123,000), while part-time positions (-68,000) fell during the month. Employment growth in the goods sector was strong (+44,000), with construction (+27,100) accounting for the largest share of the gain. On the other hand, employment on the services side of the economy was up only a modest 11,000. Educational services added 17,300 workers to payrolls, but other services-producing industries saw little change. 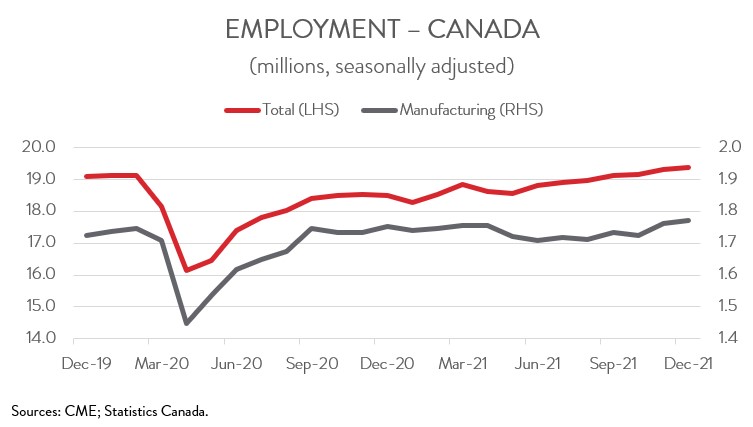 Canada’s labour market added jobs for the seven straight month in December, but January could mark the end of this hiring streak. The December labour force survey was conducted during the week of December 5 to 11, before stringent Omicron-related public health restrictions were imposed in some provinces. The January numbers will undoubtedly be more downbeat.

Employment in the manufacturing sector was up 10,500 in December, the third increase in the past four months. For the full year, manufacturing employment rose by 3.7%, not strong enough to make up for the 3.9% decline in 2020. As noted by Statistics Canada, employment in the sector had returned to its pre-pandemic level by the end of 2020, but there was little net growth during 2021. The sector’s recovery has been held back by significant supply chain and workforce challenges, the most prominent example of which is the global semiconductor shortage. Not surprisingly, among all subsectors, employment in motor vehicle parts manufacturing remains the furthest from a full recovery. 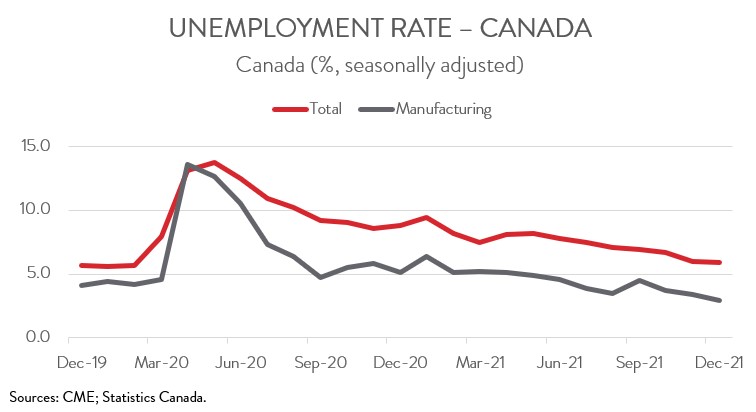 Even though the jobless rate matched a record low, the average hourly wage rate in the manufacturing sector dipped 0.2% on the month, falling from $29.50 in November to $29.43 in December. Nevertheless, on a year-over-year basis, wage growth accelerated from 3.3% in November to 3.5% in December, the fastest pace since August 2020. Upward pressure on wages is expected to persist in 2022 if the tight labour market conditions do not ease. 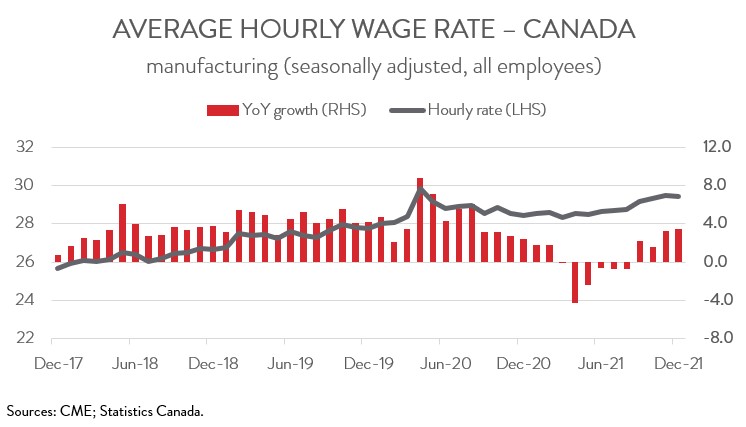 ONTARIO SEES STRONGEST JOB CREATION ACROSS THE ECONOMY AND IN MANUFACTURING

The job gains in spanned 7 of 10 provinces. Employment in Ontario rose by 46,900, up for the seventh straight month and bringing total gains since May to 468,000. Last month’s increase was all in full-time work and was driven by wholesale and retail trade and by manufacturing.

Employment in Saskatchewan was up 6,000 in December, the strongest increase since August. The gain was in full-time employment, with professional, scientific and technical services contributing the most to growth.

On the negative side, employment fell by 4,600 in Newfoundland and Labrador, partly erasing the 9,100 jobs created in November. To make matters worse, the decline was mainly in full-time work.

Employment in other provinces was little changed.

In the manufacturing sector, employment was up in only 4 of 10 provinces in December. Ontario led the way with the creation of 16,200 jobs, building on gains in October and November. At the same time, Quebec manufacturers added 2,200 workers to payrolls, the second consecutive monthly advance. On the other hand, manufacturing employment was down 3,400 in Newfoundland and Labrador and 2,900 in BC. 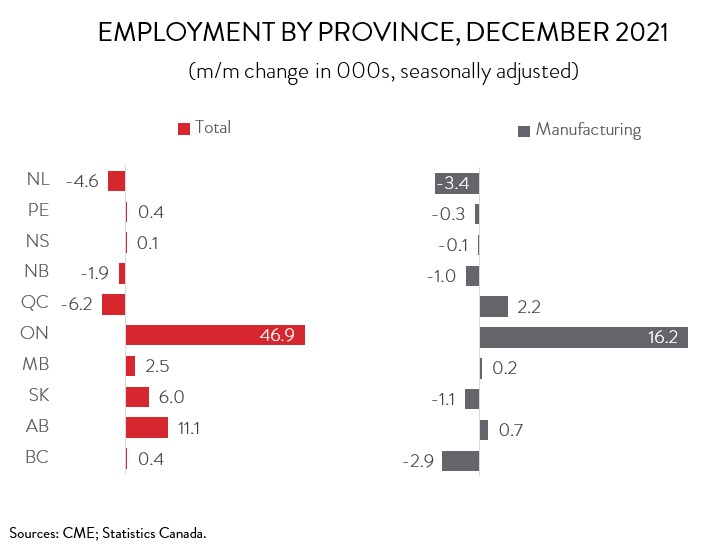