Canadian labour markets roared back to life in April after modest job losses in March. Driven by gains in construction and in wholesale and retail trade, April’s record-setting jobs numbers are a sigh of relief for an economy that struggled out of the gate in 2019.

The Canadian economy added 106,600 net new jobs last month (an increase of about 0.6 per cent), blowing past expectations after a loss of about 7,200 jobs in March. With modern data going back to 1976, that increase represents the most jobs Canada has ever created in a single month. For the first time ever, there are more than 19 million employed Canadians. 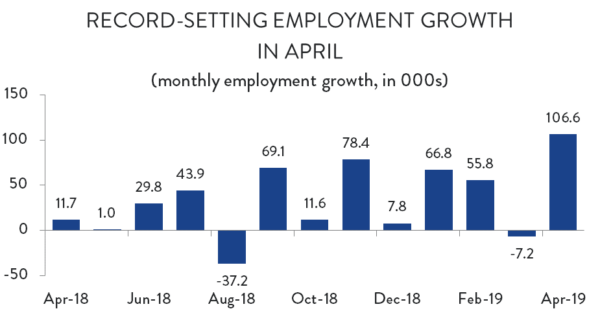 April’s excellent jobs numbers, combined with healthy growth in January and February, mean that year-over-year employment growth is accelerating. Employment is 2.3 per cent higher than it was 12 months ago – representing the creation of about 426,000 jobs over that period. 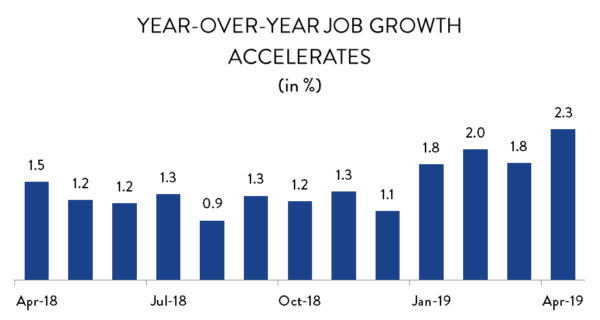 With such a large increase in employment, there was cross-the-board good news for other major labour market indicators as well. Labour force participation jumped two basis points to 65.9 per cent – its highest level in almost two years. The employment rate (the share of working-age Canadians with a job) rose to 62.1 per cent – its highest level since January 2009. The only surprising result is that because of the surge in the number of Canadians looking for work, the unemployment rate only fell by one tenth of a percentage point to 5.7 per cent.

Finally, most of the 100,000-plus jobs created in April were in full-time positions. There were 73,000 more full-time jobs across the country compared to March, while part-time employment rose by 33,600 positions. 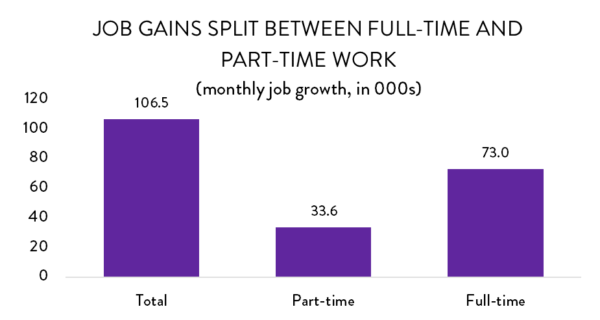 With labour markets strengthening, there was a modest uptick in average wages across the country in April. Year-over-year wage growth has been slowly accelerating since bottoming out last November; it reached 2.5 per cent in April. If labour markets continue to remain this strong, average hourly wages are likely to continue to pick up in the months ahead. 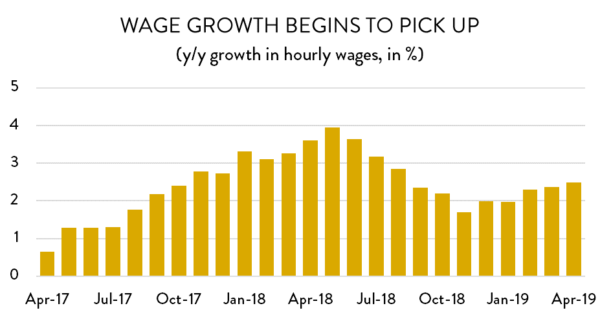 The strongest wage growth across the country was in Manitoba, followed by Quebec. 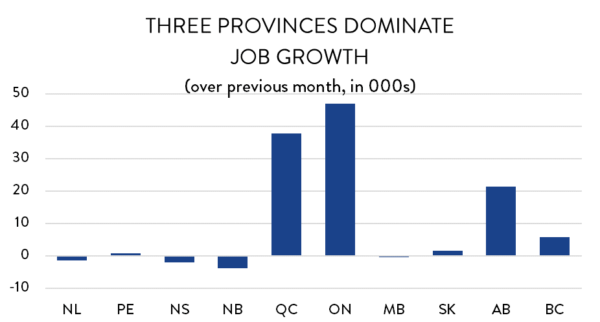 Meanwhile, employment was down in most of Atlantic Canada as well as in Manitoba. New Brunswick lost about 3,900 jobs in April, giving back all of its gains in March. Employment also fell in Nova Scotia (2,100 jobs) and Newfoundland and Labrador (1,500 jobs). In both cases, those declines represent a partial climbdown from recent strong growth.

At the industry level, employment growth was relatively widespread with 12 of the 16 industry sub-sectors posting gains. By far the largest increases were in trade and construction, which added 32,400 and 29,200 new jobs, respectively. Canada had been steadily losing wholesale and retail trade jobs through much of 2018, but employment in that industry has rebounded strongly so far in 2019. For its part, construction employment had fallen for four consecutive months, but April’s surge was easily enough to counteract those losses. 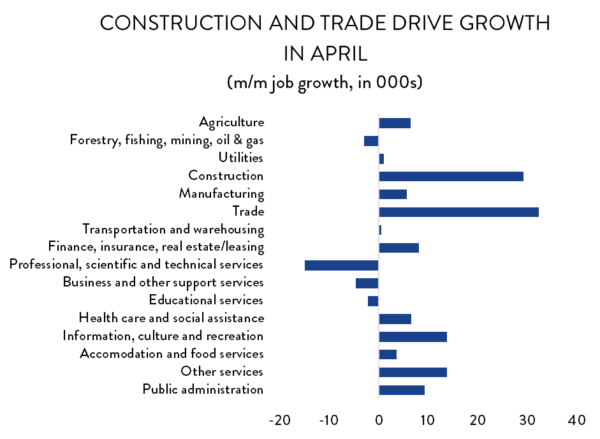 The largest decline was in professional services industries, where employment fell by 14,900 positions (1.0 per cent). However, that decline pales in comparison to the 78,100 jobs created in those industries from August to March.

For the third month in a row, the manufacturing sector posted steady employment gains, adding 5,700 net new jobs compared to March. That increase – of about 0.3 per cent – builds on the 4,500 positions created in March and the 4,000 in February. With April’s gains, there are now 1.75 million Canadians working in manufacturing – the most since January of last year. 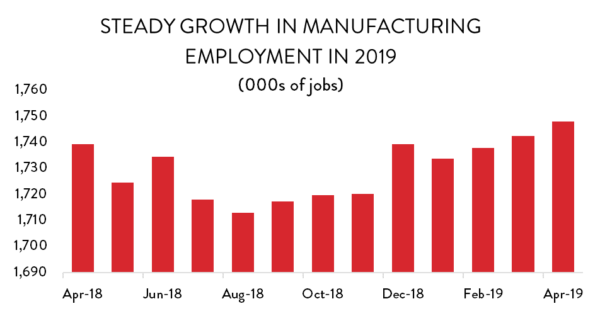 Even though employment was up in April, the jobless rate in manufacturing rose as well – from 3.2 per cent in March to 4.0 per cent. Even so, manufacturing labour markets remain extraordinarily tight compared to the Canadian job market as a whole.

Tight labour markets in manufacturing continue to exert upward pressure on manufacturing wages. Year-over-year wage growth dipped slightly in April but remains high compared to other industries. Wages are 4.9 per cent higher than they were a year ago, compared to 2.5 per cent growth for the economy as a while. 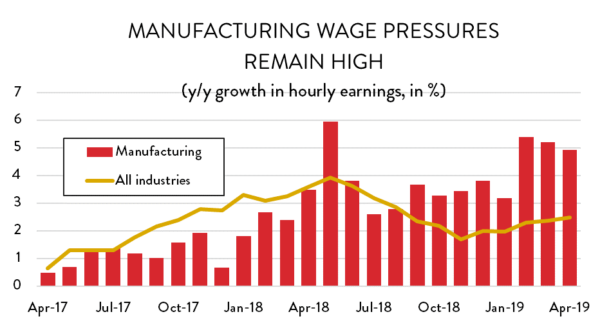 The story varies considerably from one province to the next, however. Six of the ten provinces are seeing growth in the range of 5-10 per cent – peaking at 12.8 per cent in PEI. However, Newfoundland, BC, Nova Scotia and Manitoba are all seeing manufacturing wages decline. 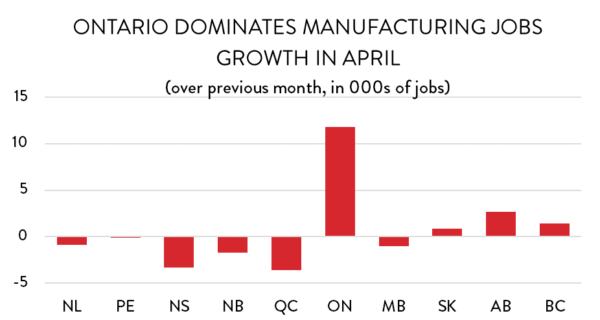 Elsewhere, however, manufacturing employment fell. Nova Scotia lost 3,300 manufacturing jobs in April, erasing a surge of about the same size the previous month. After a strong showing in March, Quebec gave back some of those gains, shedding 3,600 jobs in the sector. There were also notable job losses in Newfoundland and in Manitoba.