Manufacturing Sales Rebound in May, Still Well Below Pre-Pandemic Levels

MANUFACTURING SALES INCREASE 10.7 PER CENT IN MAY

After suffering a record 27.9 per cent decline in April, manufacturing sales started to turn around in May, rising 10.7 per cent to $40.2 billion. However, even with this gain, factory sales in May were 28.4 per cent below their pre-crisis levels in February. After removing the effect of prices, manufacturing volumes rose 8.8 per cent. 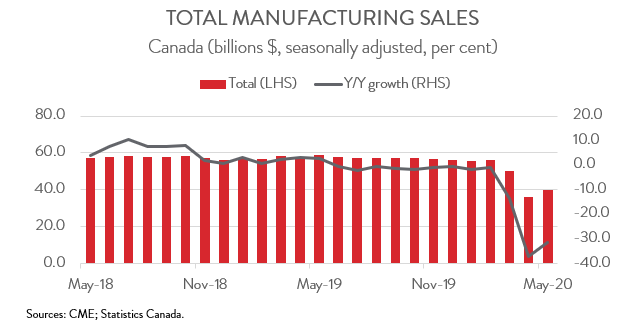 Today’s manufacturing sales report was yet another sign that May marked the turning point for the economy. However, despite this good news, the manufacturing industry still faces a long uphill battle to get back to pre-pandemic levels, especially with rising COVID-19 cases in the US, Canada’s largest trading partner, jeopardizing its economic recovery.

GAINS BROAD-BASED ACROSS 9 OF 11 MAJOR INDUSTRIES

Sales were up in 9 of 11 major industries, headlined by a substantial rebound in motor vehicles and parts. Specifically, sales rose an astonishing 309.1 per cent in May, reflecting the resumption of production in the auto industry. However, despite this monthly increase, sales of motor vehicles and parts in May were 75 per cent below their February level.

Sales in the petroleum and coal products industry increased for the first time in five months in May, climbing by 18.6 per cent to $2.4 billion. This increase was attributable to both higher volumes and prices, as refineries ramped up production to meet rising demand as provinces across Canada began reopening their economies. 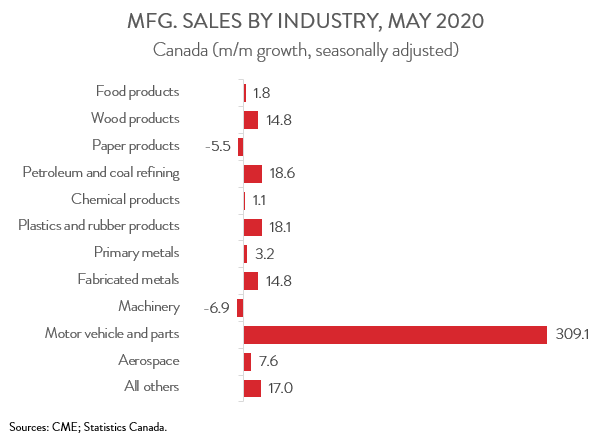 On the negative side, sales in the machinery industry fell four the fourth straight month in May, down 6.9 per cent. According to Statistics Canada, the decline was attributable to some customers postponing orders due to COVID-19. At the same time, sales of paper products fell for the second consecutive month, down 5.5 per cent. This decline was attributable to lower demand from many corporate offices, shopping malls, and restaurants.

Manufacturing sales climbed in 8 of 10 provinces in May, led by Ontario and Quebec. Sales in Ontario rose 17.5 per cent to $16.4 billion, thanks largely to higher sales of motor vehicles and parts. In Quebec, sales climbed 9.1 per cent to $10.6 billion, led by gains in fabricated metal products, wood products, and transportation equipment. Gains in the other provinces ranged from 13.2 per cent in Newfoundland and Labrador to 2.1 per cent in New Brunswick. On a negative note, sales fell by 6.7 per cent and 1.7 per cent, respectively, in PEI and Nova Scotia. 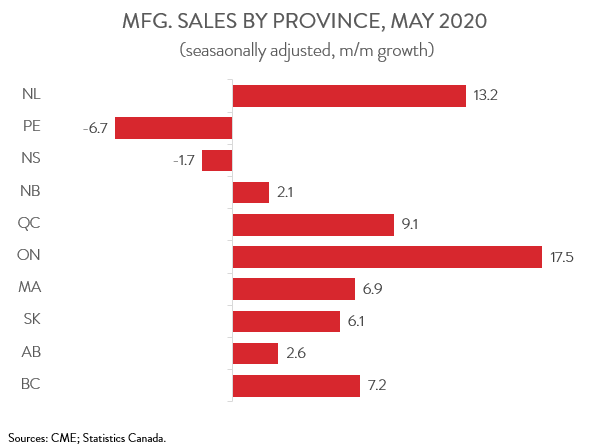 Inventories fell for the second straight month in May, down 1.5 per cent. This, combined with the rise in sales, allowed the inventory-to-sales ratio to inch down from a record 2.41 in April to a still elevated 2.15 in May. 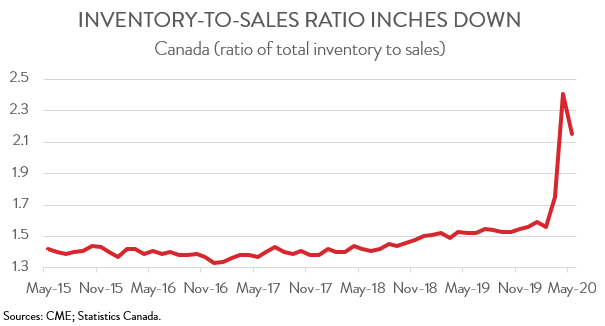 Forward-looking indicators were mixed. New orders increased by 9.4 per cent to $37.8 billion in May, the first increase since February, mostly due to higher orders of transportation equipment. On the other hand, unfilled orders fell for the second straight month, down 2.4 per cent to $95.4 billion. This decline was largely attributable to lower unfilled orders in the aerospace product and parts industry. 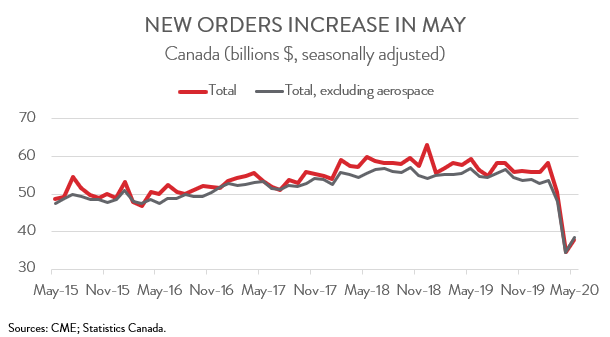 CAPACITY UTILIZATION RATE HEADS BACK UP

Finally, with some manufacturers resuming operations following full or partial shutdowns, the industry’s capacity utilization rate increased 8.8 percentage points from 54.0 per cent in April to 62.8 per cent in May. This is still well below February’s rate of 76.8 per cent. 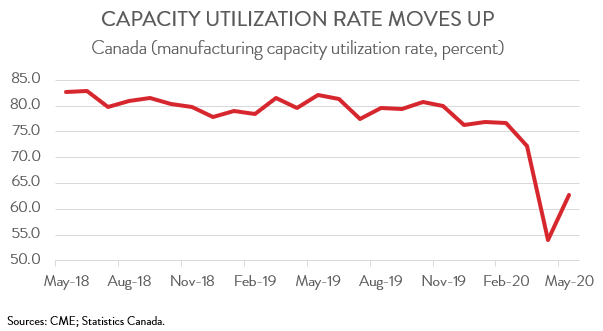