Manufacturing sales rose by a record 20.7 per cent to $48.7 billion in June, extending the 11.6 per cent gain in May. After removing the effect of prices, manufacturing volumes rose 18.4 per cent. 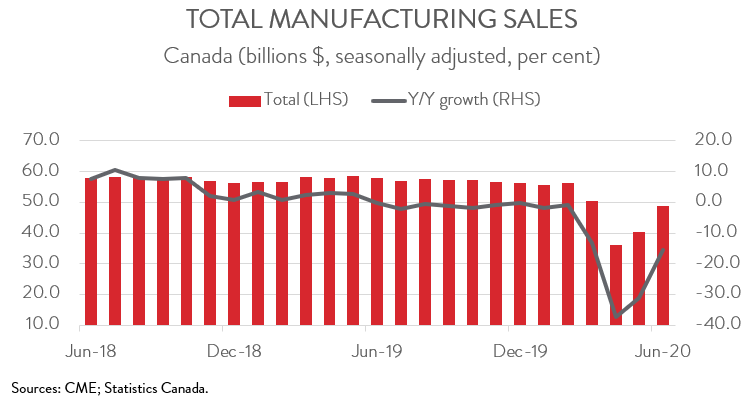 Despite the strong showings in May and June, factory sales posted a record decline of 22.8 per cent in the second quarter. Accordingly, the value of sales fell to their lowest level since the third quarter of 2009.

Looking at the data in a more positive light shows that the manufacturing sector has now recovered about 63 per cent of its March and April losses in just two months. However, given that the pace of the economic recovery from the COVID-19 disruption is expected to slow, recouping the remaining 37 per cent will be a more drawn out process. Moreover, the recent imposition of aluminum tariffs by the US and its impact on Canada-US trade relations adds another layer of uncertainty to the manufacturing outlook.

All 11 major industries saw sales increase, although motor vehicles and parts accounted for more than half the gain. In fact, sales of motor vehicle and parts surged 217.7 per cent, as June marked the first full month of production for the North American auto industry. Despite this increase, sales were down by one-quarter compared with the same month a year ago. 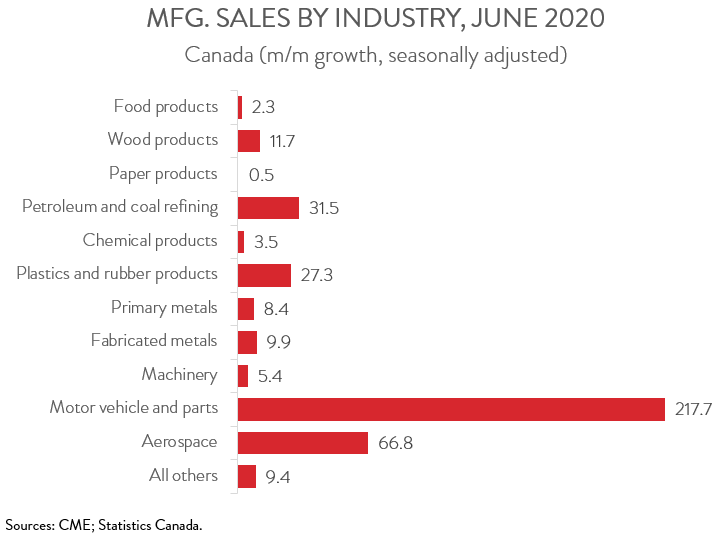 Sales in the petroleum and coal products industry increased for the second straight month, up by 31.5 per cent, thanks to both higher prices and volumes. According to Statistics Canada, the increase was attributable to refineries ramping up production in response to rising demand for fuel as provinces continued to reopen their economies. Still, on a year-over-year basis, sales of petroleum and coal products were down by 46.9 per cent.

Three other major industries also enjoyed double-digit gains in June: aerospace (66.8 per cent), plastics and rubber products (27.3 per cent), and wood products (11.7 per cent). The woods products industry is closest to fully recouping its COVID-19-induced losses. In June, sales were only 0.4 per cent below their February 2020 level.

Manufacturing sales climbed in 8 of 10 provinces in June, led by Ontario and Quebec. Sales in Ontario rose for the second consecutive month, up by 35.8 per cent, on the strength of higher motor vehicle and part sales. Likewise, Quebec factory sales increased for the second month in a row, up by 16.9 per cent, with the transportation equipment industry accounting for close to half the gain.

On a negative note, sales fell by 7.2 per cent and 1.7 per cent, respectively, in PEI and Manitoba, with the declines mainly attributable to lower sales of durable goods. Although sales in Newfoundland and Labrador rose 13.2 per cent in June, it has experienced the slowest recovery to date. In fact, the province’s sales in June were 48.5 per cent below their pre-pandemic levels. 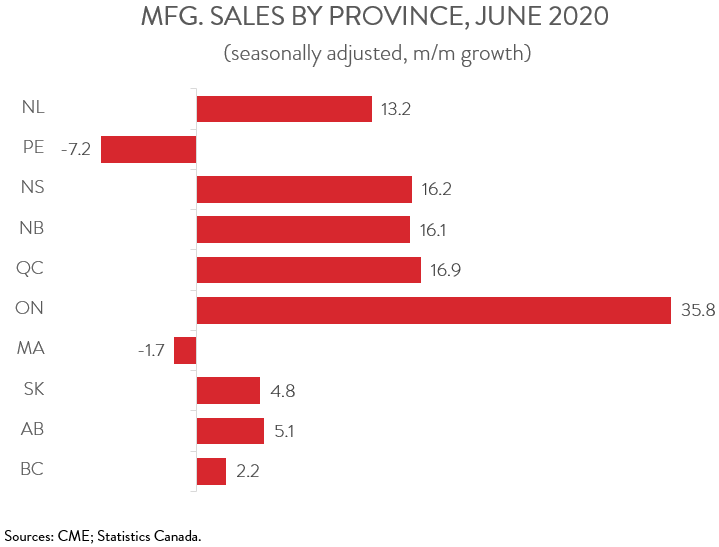 Inventories fell for the third straight month in June, edging down 0.3 per cent. This, combined with the record increase in sales, pushed down the inventory-to-sales ratio from 2.16 in May to 1.79 in June. This ratio represents the number of months it would take to completely clear inventories assuming sales remain at their current level. 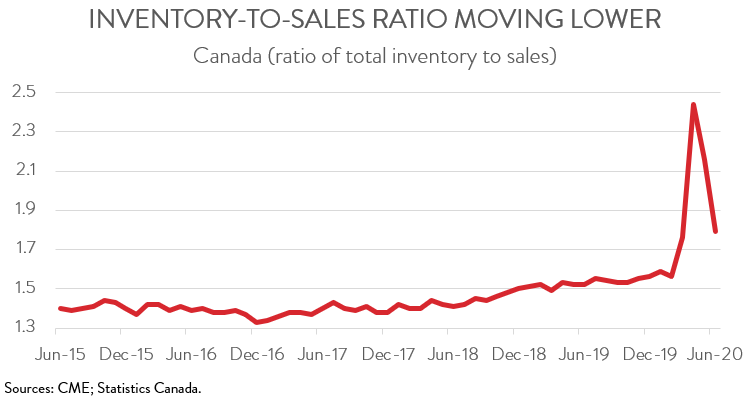 Forward-looking indicators were mixed. New orders increased by 23.6 per cent to $47.2 billion, building on the 10.5 per cent increase in May. New orders of transportation equipment were particularly strong. On the other hand, unfilled orders fell for the third straight month, down 1.6 per cent to $94.2 billion. The largest declines were in the transportation equipment and fabricated metal product industries. 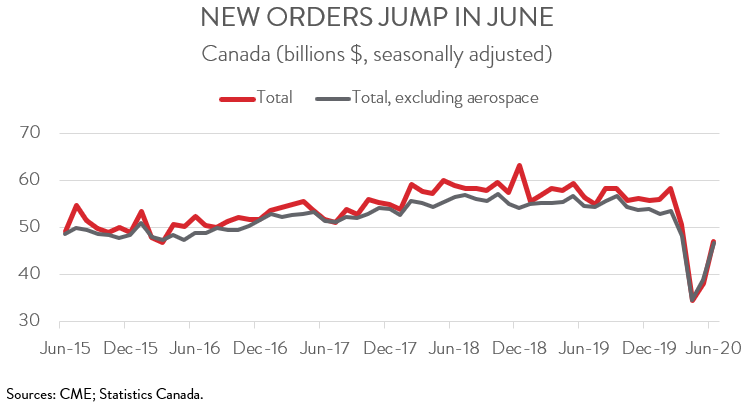 Finally, many factories operated at a much higher capacity in June, and this was reflected in a big jump in the manufacturing sector’s capacity utilization rate. In fact, the rate increased 10.9 percentage points from 62.4 per cent in May to 73.3 per cent in June. This is only 3.5 percentage points below the February rate of 76.8 per cent. 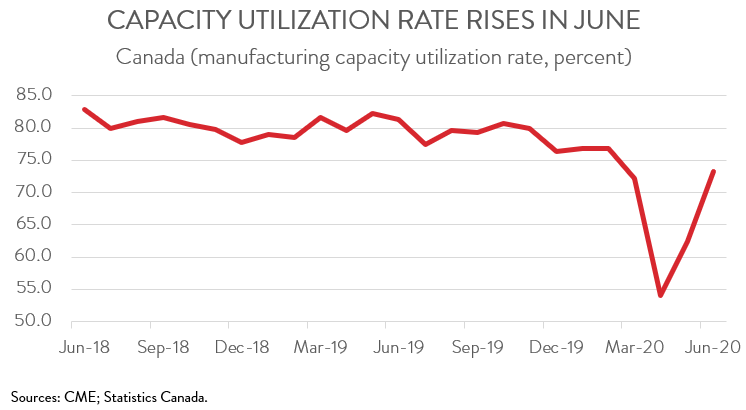