Factory Sales Pull Back in November, Driven Down Mainly by the Aerospace and Motor Vehicle Industries

Manufacturing sales fell 0.6 per cent to $53.7 billion in November, leaving them 3.8 per cent below their pre-pandemic levels. The story was the same when removing the effects of price changes: sales in constant dollars also declined 0.6 per cent. 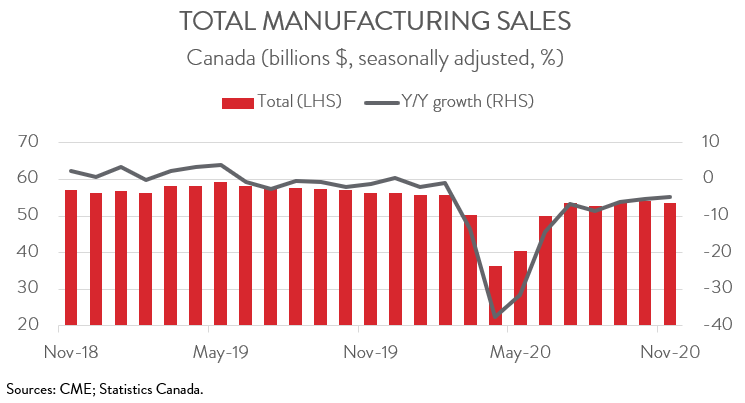 The manufacturing recovery appears to be stalling out, in line with rising COVID-19 infections and renewed restrictions. In fact, after posting rapid growth between May and July, manufacturing sales have increased by a total of just 0.1 per cent since August. Unfortunately, several provinces and trading partners have imposed even stricter public health measures since November, suggesting that the associated drop in demand will continue to weigh on manufacturing activity until the vaccine rollout accelerates at both home and abroad.

The November pullback was limited to just 4 of 11 major industries. Sales of aerospace product and parts plunged by 23.8 per cent to $1.2 billion, as the industry continues reel from the near collapse in air travel demand. On a year-over-year basis, sales were down 45.5 per cent.

Motor vehicle and parts sales fell 5.3 per cent to $7.1 billion in November, its fourth straight monthly decline. This left sales 8.4 per cent below February 2020 levels and 13.4 per cent below year-ago levels. 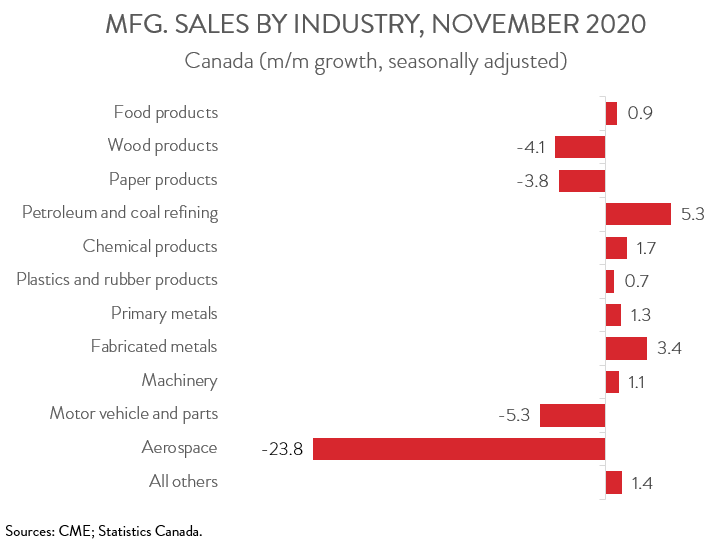 On the positive side, sales of petroleum and coal products rose 5.3 per cent to $4.0 billion, up for the second month in a row. Despite these back-to-back gains, sales in November were still 26.8 per cent lower compared with February. The oil and gas industry faces a long uphill climb from pandemic lows.

SALES DOWN IN 6 OF 10 PROVINCES

Sales were down in 6 of 10 provinces in November. Following a 0.2 per cent decline in October, sales in Ontario decreased 0.8 per cent to $25.1 billion in November, attributable to lower sales of transportation equipment. This left the province’s total sales down 3.6 per cent compared with February.

Sales in BC fell for the first time in seven months, down 4.2 per cent to $4.5 billion in November, driven by lower sales of wood products and paper. Despite the decline, manufacturing sales in BC were 3.7 per cent above their pre-pandemic levels.

At the other end of the spectrum, sales in Alberta increased 1.4 per cent to $5.5 billion, the third straight monthly increase, thanks to higher sales of petroleum and coal products, machinery, and chemicals. However, despite this turnaround, total sales were still 11.3 per cent below their February levels. 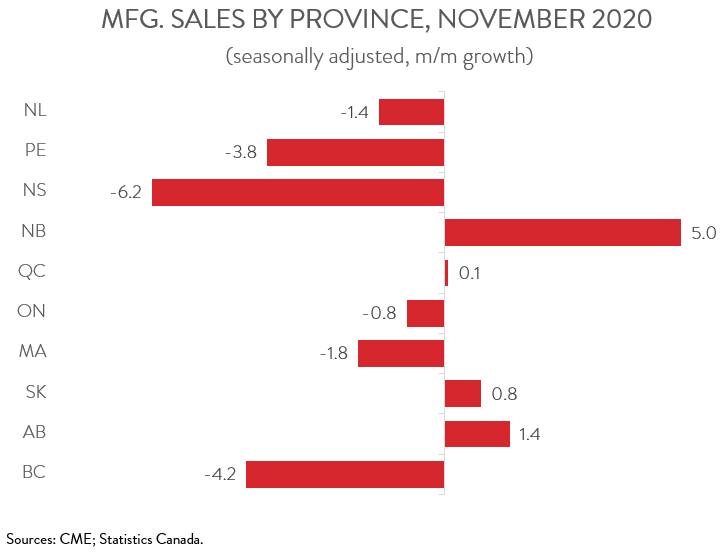 Finally, sales in New Brunswick climbed 5.0 per cent to $1.5 billion in November, on higher sales in non-durable goods industries. While the province’s sales in November were 6.6 per cent above their February 2020 levels, they were down 15.9 per cent compared to the same month one year ago.

Total inventories increased 0.8 per cent to $87.1 billion in November, more than offsetting a 0.4 per cent decline in October. This, combined with the decrease in sales, pushed the inventory-to-sales ratio up from 1.60 in October to 1.62 in November. This ratio represents the number of months it would take to exhaust inventories assuming sales remain at their current level. 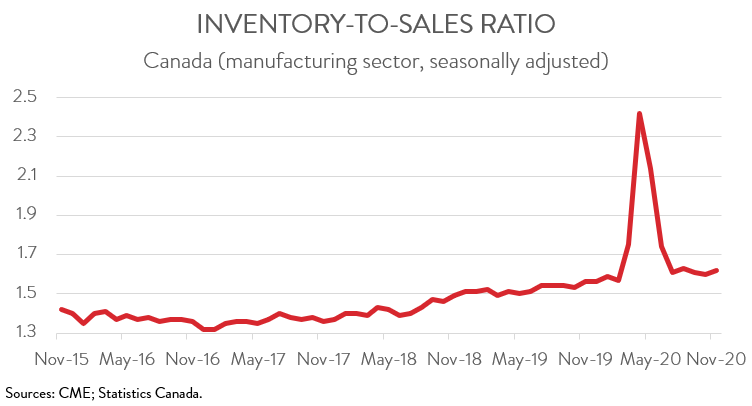 Forward-looking indictors were discouraging in November. The total value of unfilled orders decreased 3.6 per cent to $85.5 billion, falling to its lowest level since January 2018. The decline was primarily attributable to lower unfilled orders of aerospace products and parts.

At the same time, the total value of new orders fell 1.2 per cent to $50.4 billion, its third decline in four months. The transportation equipment industry was largely responsible for the drop. 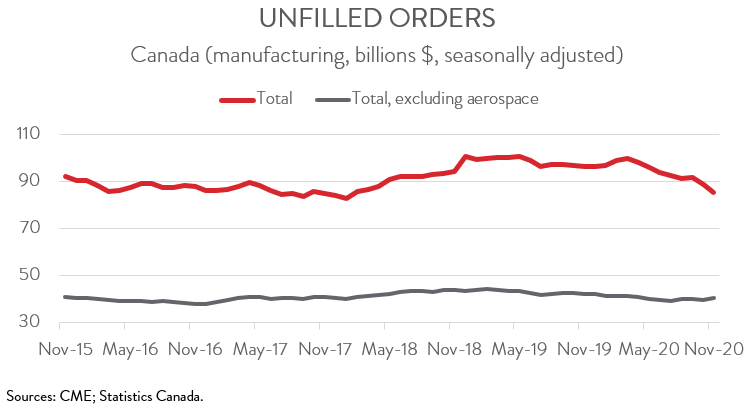 Finally, the manufacturing sector’s capacity utilization rate fell from 78.3 per cent in October to 77.7 per cent in November, signaling a drop in production. On a positive note, the rate remained above its February 2020 level of 76.4 per cent. 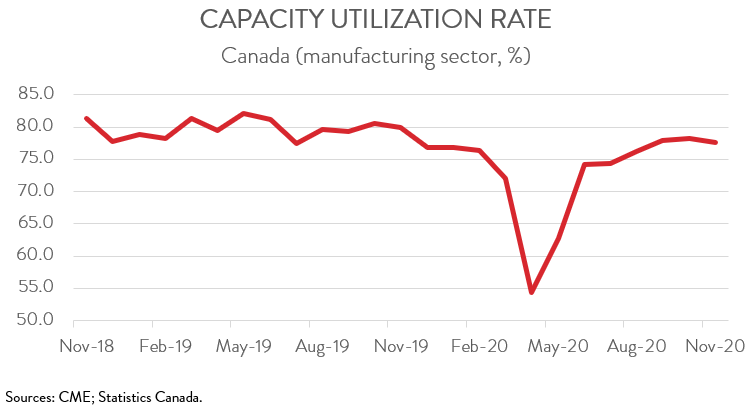