Manufacturing sales rose 3.1 per cent to $56.2 billion in January, pushing sales above pre-pandemic levels for the first time since the start of the crisis. In constant dollars, sales were up 1.1 per cent, the first time in four months that shipment volumes increased. 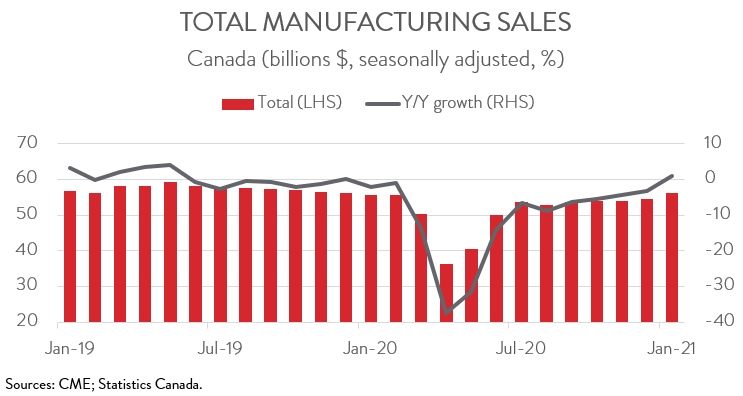 After a tough 2020, manufacturers started the new year on a brighter note, with sales rising at the fastest rate since July 2020. The near-term outlook is also upbeat, with the recent run-up in commodity prices and the massive US fiscal stimulus package boding well for exports of manufactured goods. That said, the Biden administration’s commitment to expand Buy American provisions poses a negative risk to this outlook. CME continues to work with the federal government to address this pressing issue.

The increase in sales was broad-based, spanning 9 of 11 major industries. Continuing recent trends, the wood products sector remained a key contributor to growth, with sales increasing 9.1 per cent to $4.1 billion in January. Sales of wood products were up a whopping 64.3 per cent year-over-year.

Sales of primary metals increased for the fourth straight month in January, rising 6.0 per cent to $4.2 billion, reaching the highest level since June 2019. The January gain was driven by the iron steel mills and ferro-alloy industry. Notable increases were also recorded in plastics and rubber products (+6.9 per cent), chemical products (+3.3 per cent), and food products (+2.0 per cent). 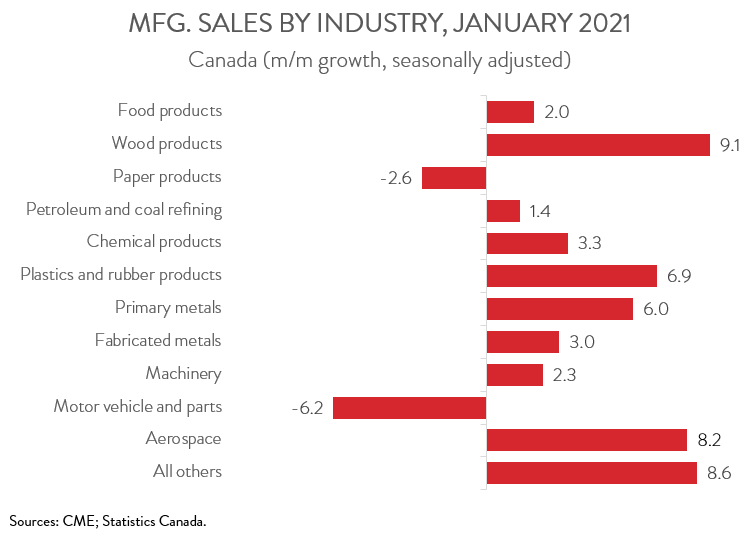 On the negative side, sales of motor vehicles and parts crashed 6.2 per cent to $6.7 billion in January, the lowest level since June 2020. As noted by Statistics Canada, a global shortage of semiconductors has disrupted production at several auto assembly and parts plants in Ontario. Unfortunately, this shortage is expected to remain an issue for the auto sector, at least over the near-term.

Regionally, sales were up in 8 of 10 provinces in January, led by Ontario and Quebec. Sales in Ontario climbed 3.0 per cent to $25.6 billion, the first increase in four months. Higher sales of computer and electronic products, non-metallic mineral products, and plastics and rubber products more than offset a decline in motor vehicles and parts. Total sales in January were up 0.4 per cent on a year-over-year basis.

In Quebec, sales rose for the third consecutive month, up 2.8 per cent to $13.8 billion. The gain was attributable to higher sales of primary metals, food, and aerospace products and parts. Despite this gain, sales were 1.8 per cent lower year-over-year.

Factory sales in BC were up for the second month in a row, increasing 5.3 per cent to $5.0 billion. As has been the case in most months since the recovery began, the gain was driven by the woods product sector. In January, overall manufacturing sales in BC were 19.5 per cent higher compared to the same month a year ago.

On a negative note, sales in Newfoundland and Labrador tumbled 7.4 per cent to $332.6 million in January on lower sales of durable goods. Year-over-year, sales were down 38.7 per cent. At the same time, sales in PEI fell 5.7 per cent to $185.1 million. 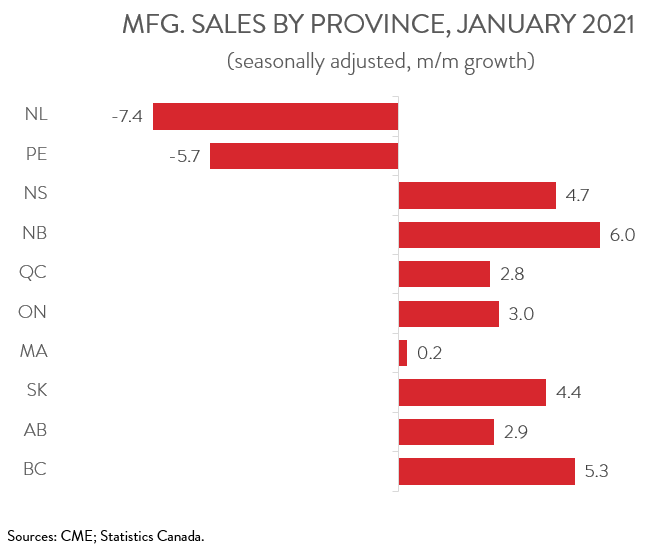 Total inventories climbed 1.9 per cent to $88.3 billion in January, more than offsetting a 0.6 per cent decline in December. With sales rising faster, the inventory-to-sales ratio edged down from 1.59 in December to 1.57 in January. This ratio represents the number of months it would take to exhaust inventories assuming sales remain at their current level. 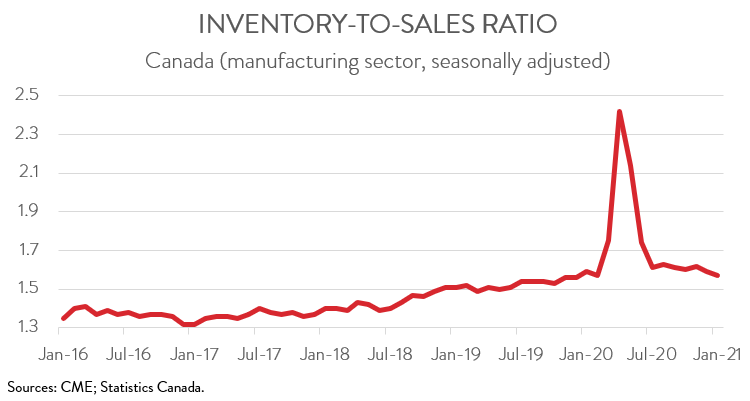 Forward-looking indictors were encouraging, with both new and unfilled increasing for the second month in a row. Following a 0.4 per cent gain in December, unfilled orders climbed 2.3 per cent to $87.5 billion January. The transportation equipment and primary metals industries were the biggest contributors to growth, and more than offset a significant decline in the machinery sector.

After increasing by 8.9 per cent in December, new orders rose 6.1 per cent to $58.2 billion in January, the highest level since August 2019. The transportation equipment industry contributed the most to the gain. 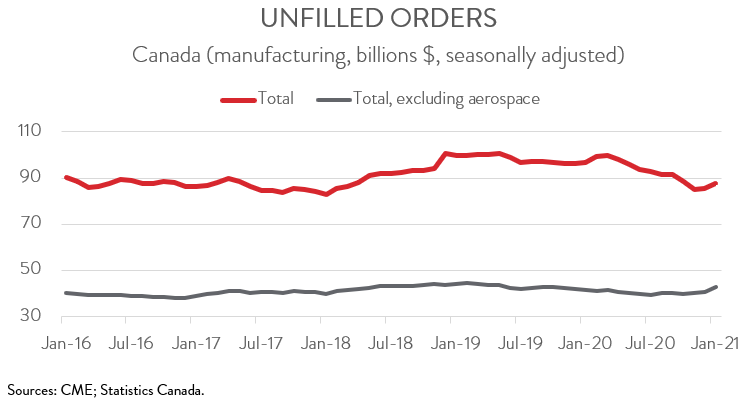 Finally, the manufacturing sector’s capacity utilization rate increased for the first time in three months, climbing from 75.7 per cent in December to 76.8 per cent in January, signaling an increase in production. This pushed the rate back above its February 2020 level of 76.4 per cent. 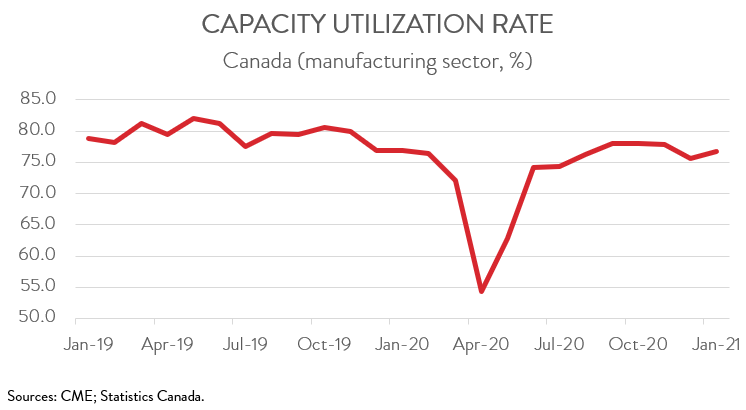