Manufacturing sales fell 1.6% to $55.4 billion in February, following an outsized gain of 3.4% in January. Compared to the same month last year, sales were down 0.8%. The picture was even weaker when stripping out price effects. In constant dollar terms, manufacturing shipment volumes fell 4.0%. On a positive note, a flash estimate from Statistics Canada indicates that manufacturing sales rose 3.5% in March. 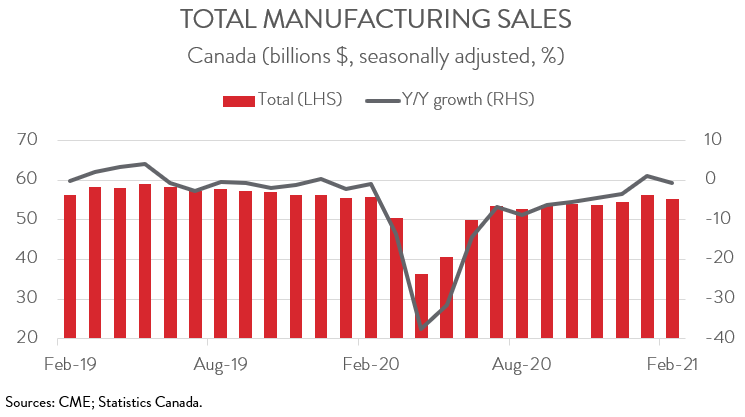 Given that sales rose at the fastest rate in seven months in January, the pullback in February was not a huge surprise. February’s decline was also exacerbated by an ongoing global semiconductor shortage, which has forced automakers to slash production. Excluding motor vehicles and parts, sales were down a more modest 0.2%. While a third wave of COVID-19 and renewed restrictions will weigh on manufacturing shipments over the near term, activity should pick up over the medium term as global economic growth accelerates, especially in the United States.

The decrease in sales spanned 6 of 11 major industries. Sales of motor vehicles and parts fell 12.5% to $5.8 billion in February, the lowest level since May 2020, as the industry continues to be weighed down by the global microchip shortage. Year-over-year, sales were down by one-quarter.

The disruptions in the auto sector also had knock-on affects in other industries. For example, sales of plastics and rubber products decreased 8.7% to $2.7 billion, partly due to lower demand from motor vehicle and parts manufacturers. 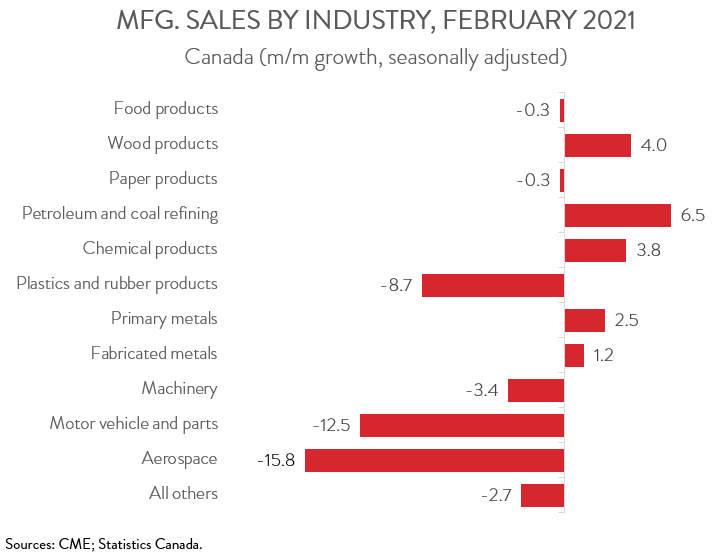 The aerospace industry continues to struggle, with sales of aerospace products and parts falling 15.8% to $1.1 billion in February. On a year-over-basis, sales were down almost 50%.

On the bright side, sales of petroleum and coal products climbed 6.5% to $4.7 billion, the fifth consecutive monthly gain and the highest level since February 2020. Volumes fell 3.3% during the month, but this was more than offset by higher prices.

Chemical sales rose 3.8% to $4.7 billion in February, the highest level since November 2018. The gain in February was largely attributable to higher sales of basic chemicals and soap, cleaning compound and toilet preparation products.

Finally, sales of wood products were up for the third straight month, rising 4.0% to $4.3 billion on both higher prices and volumes. Sales were up nearly 70% compared to the same month a year ago, as the industry continues to see robust demand for its products from the housing sector.

Regionally, sales were down in only 4 of 10 provinces, with Ontario posting by far the largest drop. Following a 3.7% increase in January, sales in Ontario fell 5.3% to $24.3 billion, mainly on lower sales of motor vehicles and parts. On a year-over-year basis, sales in Ontario were down 6.8%. 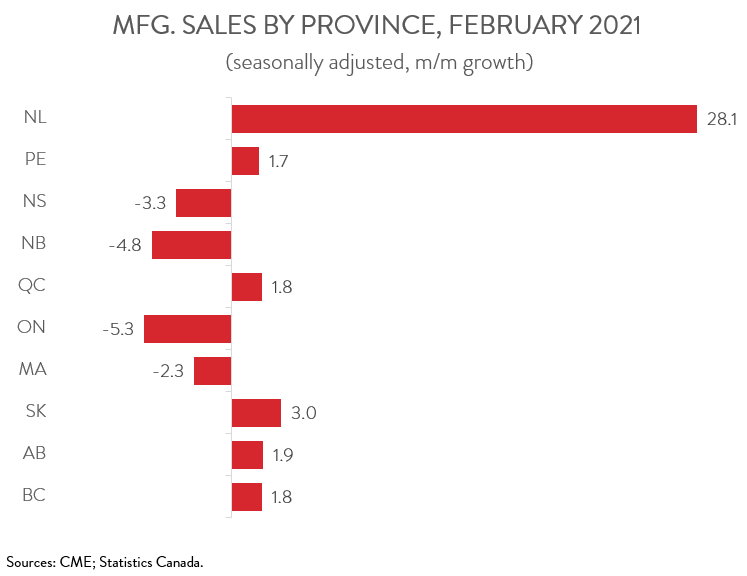 Factory sales in New Brunswick contracted 4.8% to $1.5 billion in February, the first decline in six months, driven by lower sales of non-durable goods. Despite the decline, sales in New Brunswick were up 10.1% compared to the same month a year ago. Sales were also down in Nova Scotia (-3.3%) and in Manitoba (-2.3%).

On the positive side of the ledger, sales increased in Quebec for the fourth straight month, up 1.8% to $14.1 billion in February, the highest level since October 2019. The wood product, chemical, and petroleum and coal product industries were the biggest contributors to growth.

Sales in Alberta climbed 1.9% to $6.1 billion in February. The gain was fueled by the petroleum and coal products industry, which has seen sales increase in every month except one since May 2020.

Newfoundland and Labrador boasted the largest percentage increase in sales among the provinces. Its manufacturing sales jumped 28.1% to $356.7 million in February, more than erasing the 21.5% drop in January.

INVENTORIES HIT HIGHEST LEVEL SINCE MAY 2019

Total inventories climbed 0.8% to $88.7 billion in February, the highest level since May 2019. This, combined with the decline in sales, lifted the inventory-to-sales ratio from 1.56 in January to 1.60 in February. This ratio represents the number of months it would take to exhaust inventories assuming sales remain at their current level. 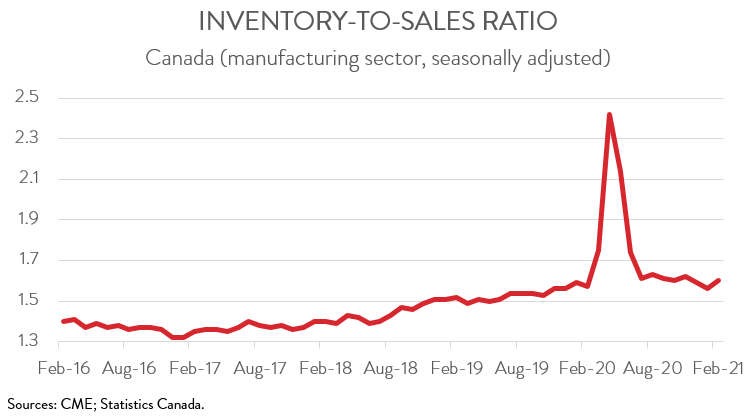 The total value of new orders fell 6.6% to $54.4 billion, with the transportation equipment industry contributing the most to the decline. New orders were up in the wood product, petroleum and coal product, and primary metal industries. 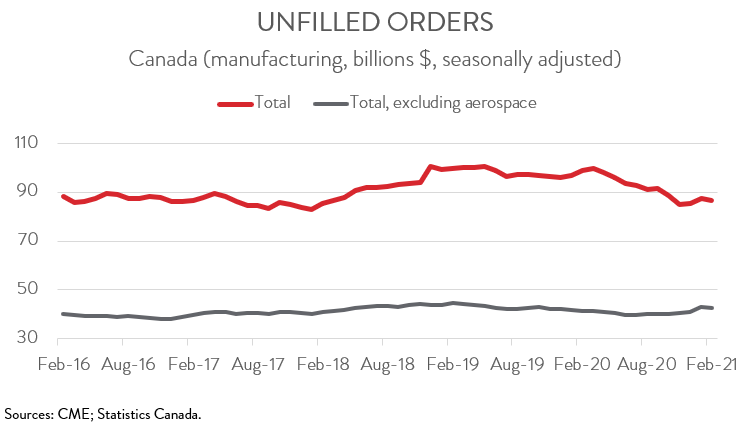 Finally, the manufacturing sector’s capacity utilization rate fell from 76.5% in January to 75.7% in February, signalling a drop in production. This was the lowest rate since July 2020. 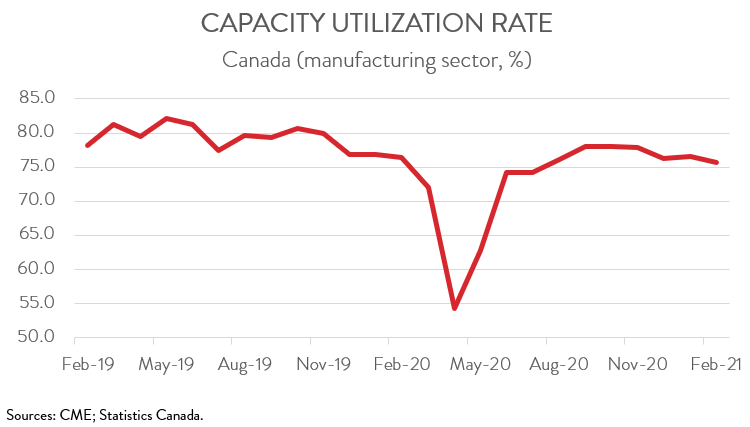