Manufacturing Sales Fall at a Record Pace in April

April marked the first full month of the COVID-19 crisis, and not surprisingly, manufacturing sales fell hard. In fact, sales declined by a record 28.5 per cent to $36.4 billion, the lowest level since July 1998. Adjusting for inflation, the story was just as ugly, with volumes down 26.0 per cent. 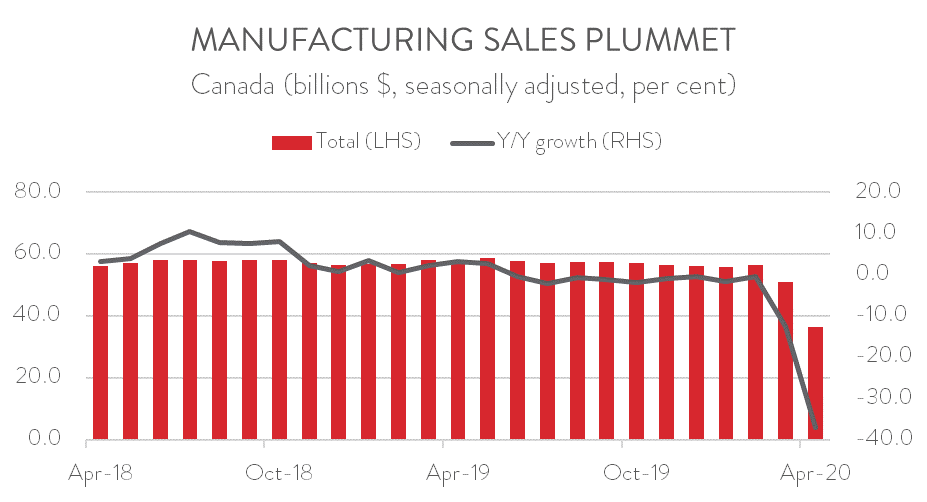 Fortunately, April will most likely represent the bottom. Sales are expected to show improvement in May, given that auto plants restarted production and facilities in other sectors reopened following the easing of COVID-19-related restrictions in some provinces. That said, the sector still faces a very uncertain future, and this sentiment was confirmed in a recent CME survey where nearly two-thirds of manufacturers said they expect their sales to remain below normal for at least the next 3-6 months.

No industry was spared from the severe economic disruptions caused by the COVID-19 outbreak, as sales fell in all 11 major industries in April. Motor vehicle and parts sales crashed by 90.1 per cent, an unsurprising result given that every Canadian assembly plant was shut down during the month. Sales in the petroleum and coal product industry fell 46.4 per cent, the fourth straight monthly decline. Demand for energy products remains depressed, with so few people driving or flying. This has also had profound implications for Canada’s aerospace industry, and its sales dropped by 53.9 per cent in April. 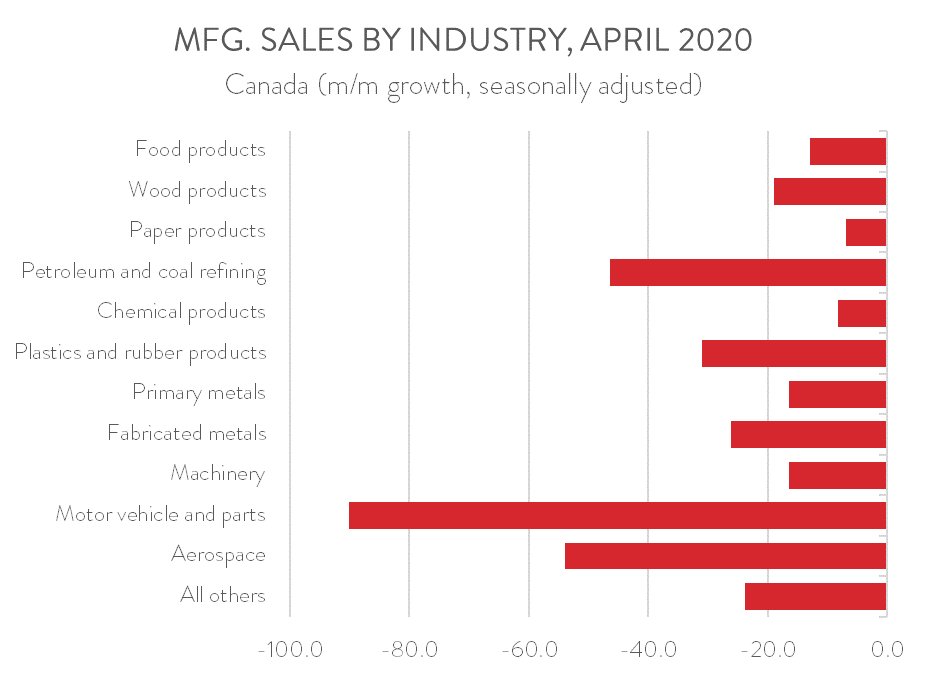 Sales in the food industry were down 12.8 per cent in April. Many meat processing plants were forced to temporarily close due to COVID-19 outbreaks among their workers. At the same time, the broader industry is also being affected by the collapse in sales to non-essential services such as restaurants, hotels, and caterers. Notable declines were also recorded in plastics and rubber products (-31.0 per cent), fabricated metals (-26.1 per cent), and wood products (-19.0 per cent).

ALL PROVINCES SEE SALES FALL TOO

Sales also fell in every province in April, although Quebec and Ontario accounted for over four-fifths of the national decline. Ontario sales tumbled 37.1 per cent. Sales fell in all industries, led by a near 100 per cent collapse in motor vehicles.

Sales in Quebec fell by 26.7 per cent, the province’s third consecutive monthly decline. Sales were down in all industries, with the sharpest drops in transportation equipment, food, and petroleum and coal products.

Among the 10 provinces, Nova Scotia was the only one to keep losses to the single digits in April, with its sales declining 8.7 per cent. 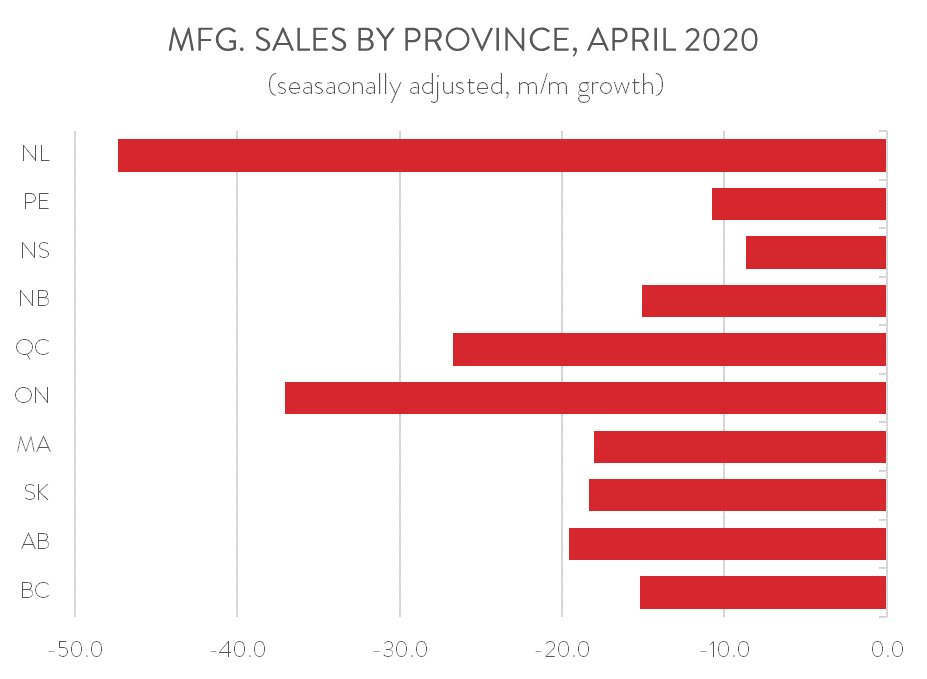 Inventories also decreased in April, but by a more modest 0.6 per cent. Accordingly, the much bigger sales drop caused the inventory-to-sales ratio to skyrocket from 1.74 in March to 2.41 in April. This was the largest monthly increase in the ratio since December 2008. 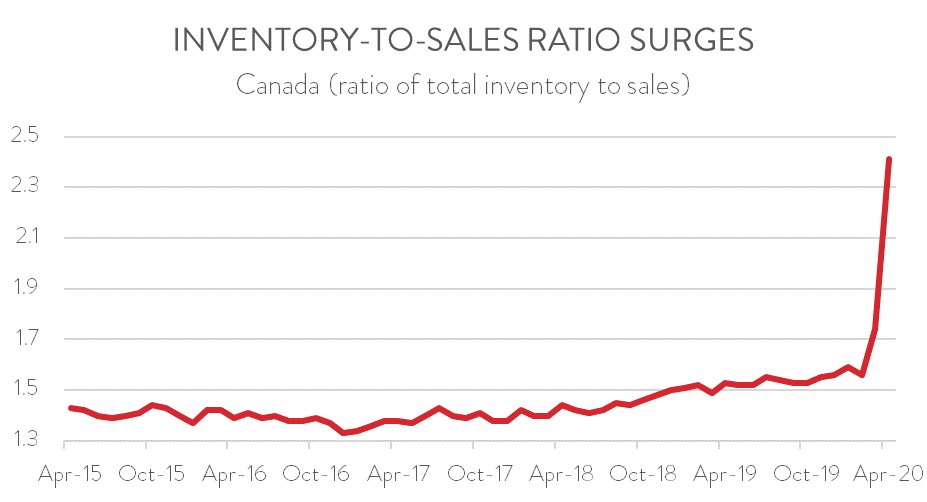 Forward-looking indicators were also discouraging. New orders plunged by nearly a third to $35.1 billion, largely reflecting lower new orders in transportation equipment and petroleum and coal products. At the same time, unfilled orders fell by 1.2 per cent from an upwardly revised $99.6 billion in March to $98.4 billion in April. This decline was mainly attributable to lower unfilled orders in transportation equipment and in primary metals. 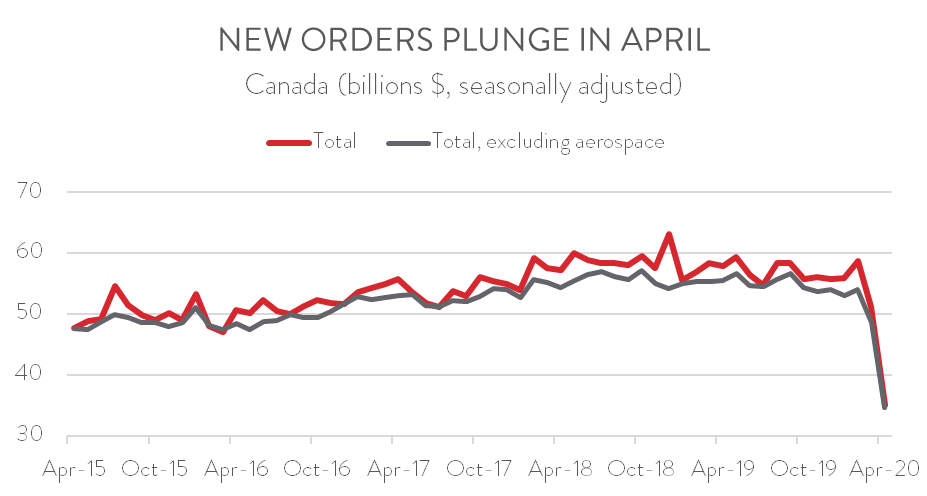 Finally, the capacity utilization rate declined a record 16.4 percentage points to 55.9 per cent, the lowest level since the series began in January 2017. In other words, nearly half the industry’s capacity was idle in April. 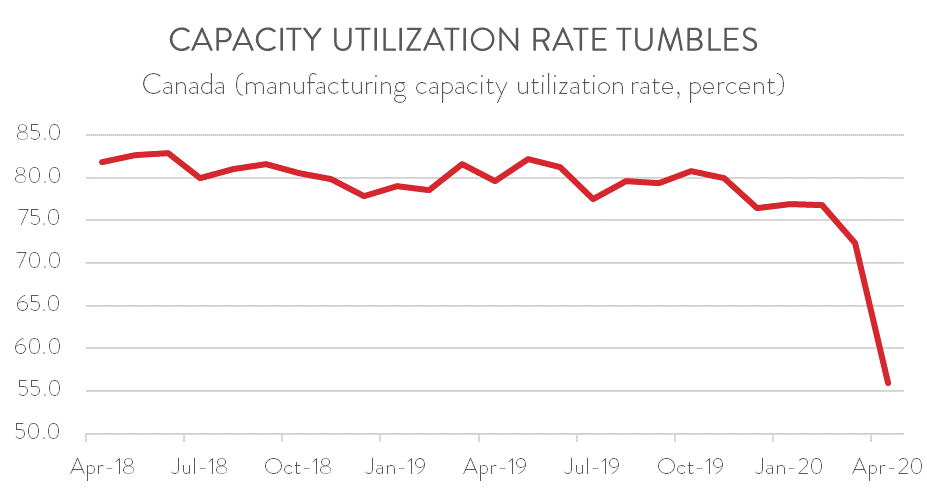