The Canadian manufacturing sector stumbled over the finish line in 2018, as continued weakness in petroleum refining drove overall sales to their lowest level since February.

After declining by (a revised) 1.7 per cent in November, overall manufacturing sales fell by another 1.3 per cent in December, bringing the overall value of monthly sales down to $56.4 billion. Output values have fallen in four of the last five months and now sit 3.7 per cent below their July peak. 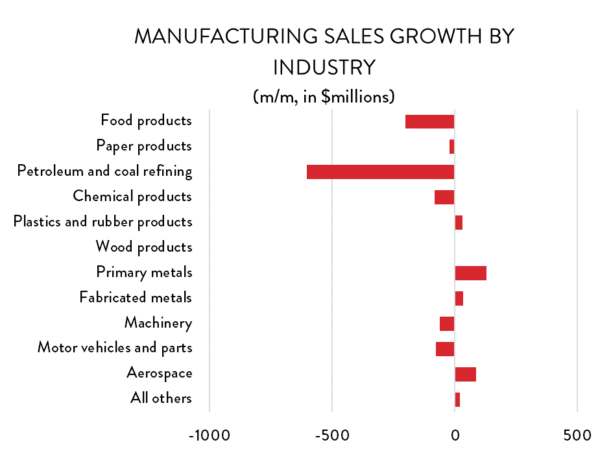 With these steep declines to end the year, the year-over-year growth picture for manufacturing has changed dramatically. As recently as October, the sector was enjoying growth in the range of 7.7 per cent. That strong trend has since evaporated. In December, manufacturing output was just 0.8 per cent higher than it was at the end of 2017. 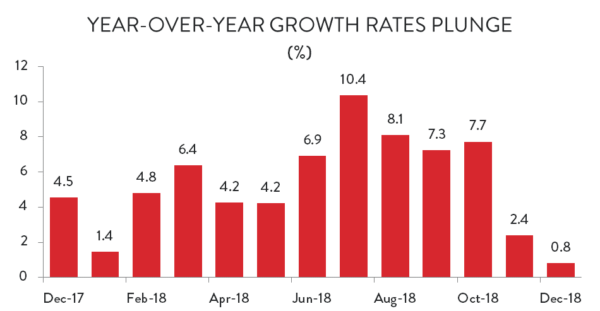 As a result, year-end figures for 2018 came in weaker than expected. CME had estimated that sales growth for the year would come in at about 6.0 per cent. There are still some revisions to fourth quarter sales estimates coming in the next few months, but as it stands today, manufacturing sales grew by about 5.5 per cent in 2018. While lower than expected, that growth was still easily enough for the sector to record a new all-time high in nominal sales. The total value of manufacturing output last year is currently estimated at about $686 billion, compared to $651 billion in 2017.

December’s decline was largely driven by lower output volumes. Volume-based sales were down 1.2 per cent compared to November with the largest drop coming in petroleum and coal refining. However, there were actually widespread volume-based declines across most of Canada’s largest manufacturing sub-sectors. The difference was that in many of those, the decline in output volumes was cushioned by higher prices. In petroleum refining, however, the impact of lower output levels was magnified by a deteriorating price environment.

Weakness in petroleum refining also drove forward-looking manufacturing indicators lower in December. After an exceptional run-up in the first half of 2018, new orders have fallen in six of the last seven months and were down 0.8 per cent in December. However, that year-end decline was entirely because of a waning outlook and price conditions in the energy sector. Outside of refining, new manufacturing orders were up slightly compared to November, fuelled by the aerospace sector and recovering demand for machinery. 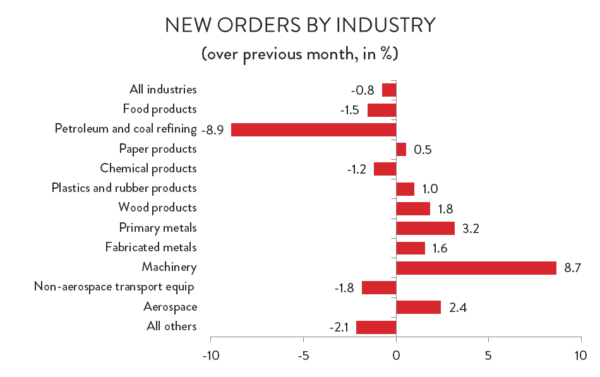 More optimism for the short-term outlook can be found in the fact that manufacturers are still contending with a significant backlog of unfinished work. The value of unfilled orders continues to climb steadily, hitting new records nearly every month. In December, unfilled orders (not including aerospace) were up 0.8 per cent, reaching a new high of $43.6 billion.

At the industry level, the big story was obviously the precipitous decline in petroleum and coal refining. The total value of output from that sub-sector was down by more than 10 per cent in December ($604 million), adding to the 14 per cent decline the previous month. That drop accounted for the lion’s share of the overall $752-million drop in manufacturing sales in December. 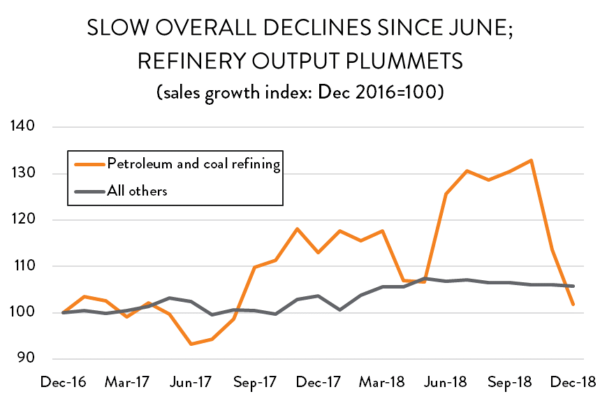 However, the news elsewhere was not especially positive, either. Of the 11 main manufacturing sub-sectors in Canada, seven were lower and only four, higher. On the positive side, aerospace deliveries were up 4.2 per cent ($85 million), and primary metals producers, which have been struggling with a weakening price environment, saw a reprieve in December, with sales up 3.0 per cent ($127 million).

On the negative side, there was a steep drop in food processing activity. Sales in Canada’s most important manufacturing sub-sector were down 2.2 per cent ($201 million), erasing two months’ worth of gains. Sales were also lower for machinery and chemicals (1.8 per cent each), and the auto sector saw output drop for the second month in a row. 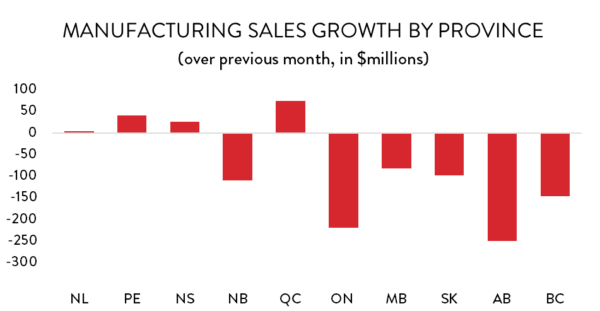 Looking across the country, Alberta was once again the weak link. Manufacturing output in that province fell by 4.0 per cent, adding to the 7.0 per cent drop in November. Even so, Alberta only accounted for about one third of the cross-country decline in December. In fact, there was red ink everywhere west of Quebec (as well as in New Brunswick). The emerging trend in BC is concerning, as that province has seen manufacturing activity fall for six consecutive months and is now 6.9 per cent below June levels. However, that pales in comparison to the 33 per cent drop in New Brunswick since June; lower oil prices and refinery maintenance have taken a toll on manufacturing output in that province. 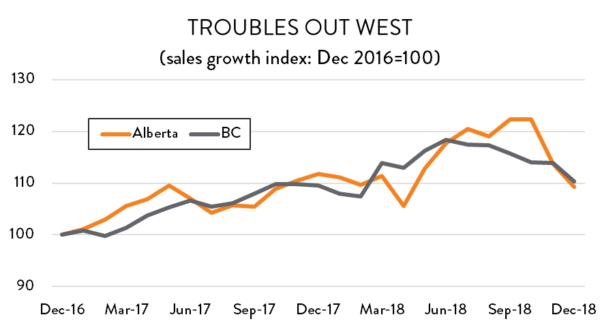 On the positive side, Quebec manufacturers posted reasonable gains (0.5 per cent) in December. There was solid growth in Nova Scotia as well, while PEI enjoyed a massive 27 per cent spike in output compared to November.