Canadian merchandise exports decreased 2.7 per cent to $49.9 billion in February, while merchandise imports fell 2.4 per cent to $48.8 billion. Despite the decline, goods exports were 4.1 per cent above pre-pandemic levels. The picture was less encouraging after removing the effect of prices. On a volume basis, exports and imports were down 3.9 per cent and 3.5 per cent, respectively. 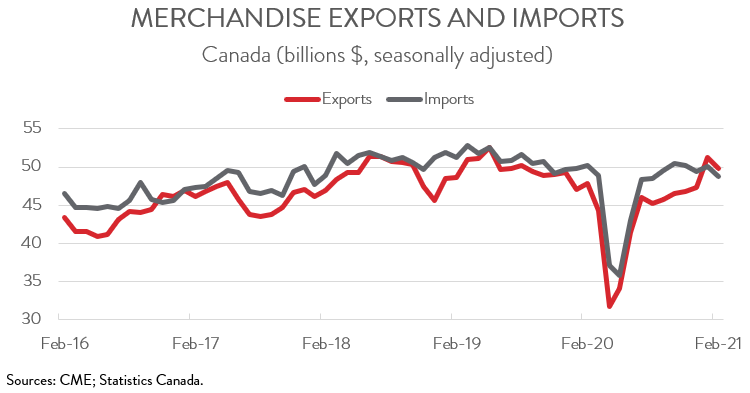 The pullback in February’s exports was not surprising, given that it followed an outsized gain of 8.2 per cent in January. In particular, the January figures were inflated by a very large one-time sale of used airplanes to the United States. Besides the current disruptions to auto production stemming from a global shortage of semiconductor chips, the outlook for Canadian trade remains positive. In its April 2021 forecast, the International Monetary Fund predicted that global economic growth would hit 6.0 per cent this year, the fastest expansion on records dating to 1980. A strong outlook for the US economy, Canada’s largest trading partner, underpins this rising optimism.

Canada’s trade balance stayed in surplus for the second straight month, coming in at $1.0 billion in February. This is the first time that the country has posted back-to-back surpluses since the final two months of 2016. Digging deeper, our trade surplus with the US widened from $5.9 billion in January to $6.8 billion in February, the largest surplus since September 2008. On the other hand, Canada’s trade deficit with the rest of the world widened from $4.7 billion to $5.7 billion. 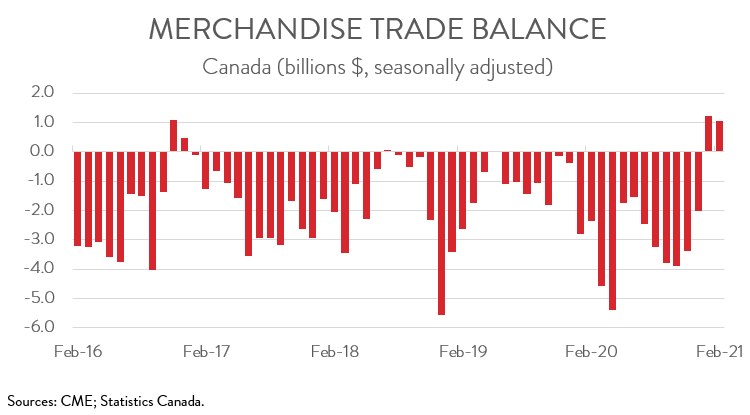 The decrease in exports was broad-based, spanning 8 of 11 major commodity groups. Exports of metal and non-metallic mineral products were down 10.9 per cent, making it the biggest contributor to the overall decline in exports. The drop was driven mainly by lower exports of unwrought gold, silver and platinum group metals and their alloys—a category largely composed of gold.

Exports of motor vehicles and parts decreased by 10.2 per cent, as auto production continued to be hampered by a global shortage of semiconductor chips. As noted by Statistics Canada, this shortage is expected to remain an issue for the auto sector over the near term, and it may even be exacerbated by the recent blockage of the Suez Canal.

Exports of aircraft and other transportation equipment and parts tumbled 20.3 per cent in February, mainly due to lower exports of aircraft. As mentioned above, the January figures were inflated by an unusually large one-time sale of used airplanes to the United States.

Exports of metal ores and non-metallic minerals fell 26.6 per cent in February. The decline was attributable to lower exports of iron ores, down from a record high in January. 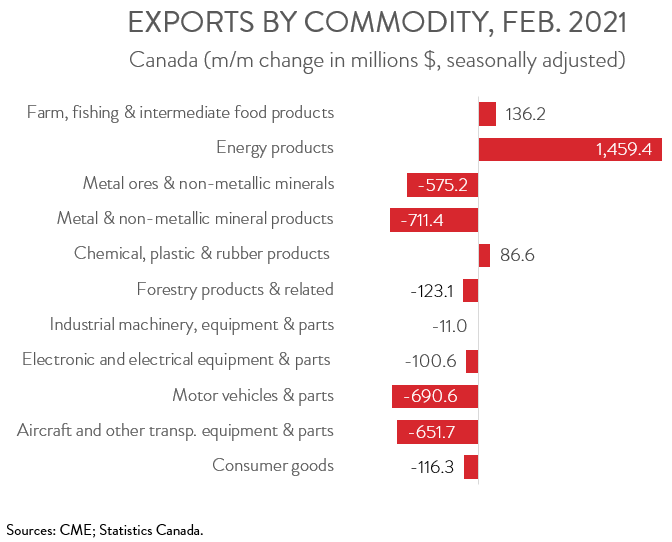 On a positive note, exports of energy products increased 18.3 per cent to $9.5 billion, the highest level since December 2019. Natural gas exports contributed the most to the growth, as extreme weather in the southern US led to a spike in natural gas prices. As well, exports of crude oil and crude bitumen rose for the fifth month in a row.

EXPORTS TO UNITED STATES RISE; EXPORTS TO MOST OTHER MAJOR TRADING PARTNERS FALL

Canada’s exports to the United States edged up 0.8 per cent to $37.4 billion in February, building on the 10.5 per cent gain in January. Higher exports of natural gas and crude oil more than made up for lower exports of motor vehicles and parts.

On the other hand, exports to the rest of the world fell by 11.7 per cent to $12.5 billion, the first monthly decline since August 2020. Among Canada’s major non-US trading partners, the results were mostly negative in February. In fact, only exports to Japan were up on the month, while exports to the UK, China, South Korea, Mexico, and the EU were down. The decrease in exports to the UK was attributable to lower shipments of gold. 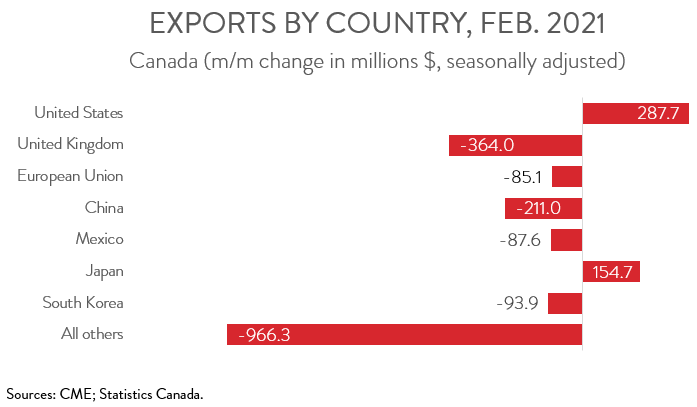