Canada’s Merchandise Trade Balance Swings Back to Deficit in March; Exports Edge Up 0.3%

MERCHANDISE EXPORTS EDGE UP 0.3% IN MARCH

Canadian merchandise exports edged up 0.3% to $50.6 billion in March, while merchandise imports jumped 5.5% to $51.8 billion. Both exports (+5.9%) and imports (+2.9%) were above pre-pandemic levels. The discrepancy between exports and imports was even wider in volume terms. In March, real exports were down 0.3%, while imports were up 7.1%. 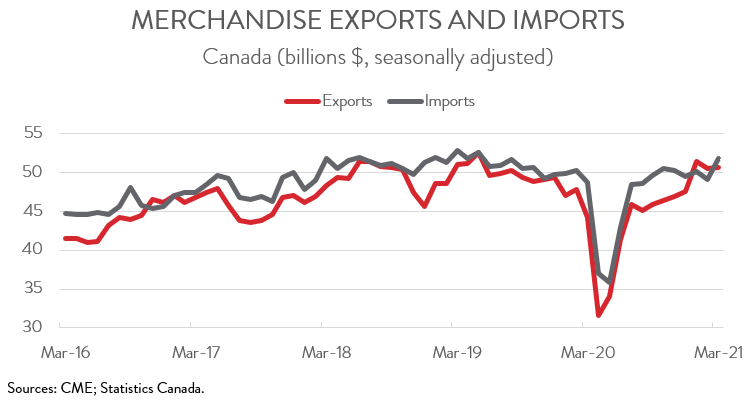 While the March trade report was uninspiring, it is important to point out that exports were largely held back by notable declines in just two categories: energy and aerospace. Canada also posted its first quarterly trade surplus in five years in the first quarter. At the same time, the jump in imports was likely a reflection of a strong domestic economy. Looking ahead, the combination of rising demand from the U.S. and higher commodity prices should boost Canada’s export growth over the near term, although this outlook is tempered by ongoing supply chain challenges, especially in the auto sector. 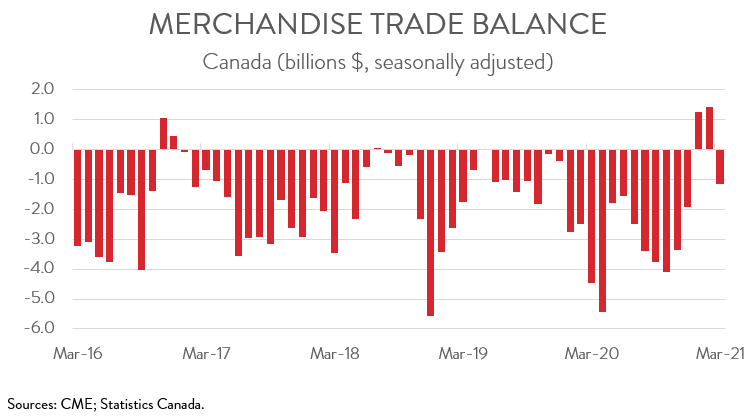 EXPORTS HELD BACK BY BIG DECLINES IN ENERGY AND AEROSPACE PRODUCTS

The increase in exports spanned 5 of 11 major commodity groups, with motor vehicles and parts leading the way. After declining 11.5% in February, exports of motor vehicles and parts climbed 10.2% to $6.7 billion in March. Despite the bounce back, the auto industry continues to struggle with a global shortage of semiconductors, which has forced several automakers to slash production. Statistics Canada noted that these production slowdowns intensified in April, implying that a pullback in exports was likely that month.

Exports of metal ores and non-metallic minerals jumped 33.0% to $2.1 billion, almost fully offsetting a 25.0% decrease in February. Exports of iron ores were the main contributor to growth in March, thanks to both strong global demand and higher prices.

On the negative side, exports of energy products tumbled 6.7% to $9.4 billion in March. The decline was mainly due to a sharp drop in natural gas prices, which had spiked in February on account of the Texas winter storm. Prices in March were almost back to January levels.

At the same time, exports of aircraft and other transportation equipment and parts declined 23.8% to $1.9 billion. Exports of used aircraft were unusually high in the previous two months, but they fell to zero in March. 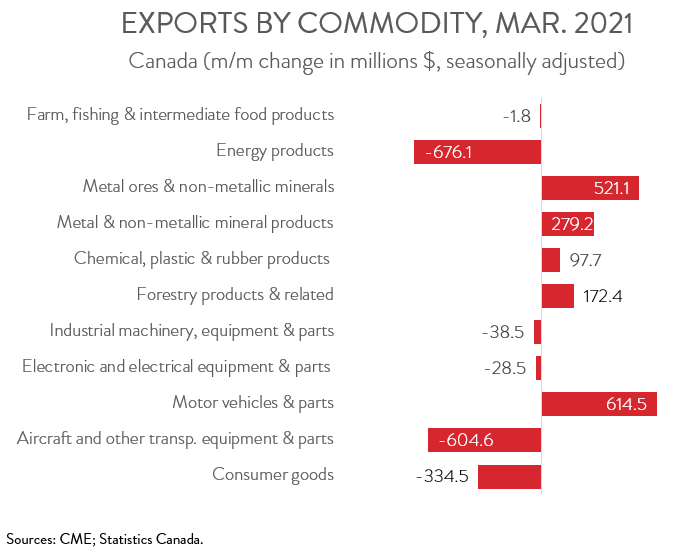 After increasing 1.8% in February, exports to the United States fell 3.8% to $36.5 billion in March. Fortunately, this was more than offset by higher exports to the rest of the world, which were up 12.6% to $14.1 billion. Among Canada’s major non-US trading partners, the results were mostly positive in March. In fact, only exports to Japan and the UK were down on the month, while exports to the EU, South Korea, Mexico, and China were up. The increase in exports to South Korea was attributable to higher shipments of metal ores and refined gold. 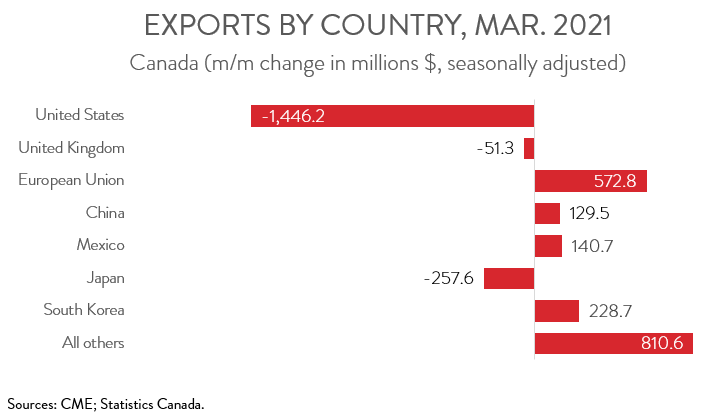