EXPORTS AND IMPORTS BOTH HIT RECORD HIGHS IN MARCH

Canadian merchandise exports rose 6.3% to $63.6 billion in March, surpassing the previous record set in February by nearly $4 billion. Merchandise imports climbed an even faster 7.7% to $66.1 billion, also a record high. In volume terms, real exports and real imports were up 1.1% and 7.0%, respectively. 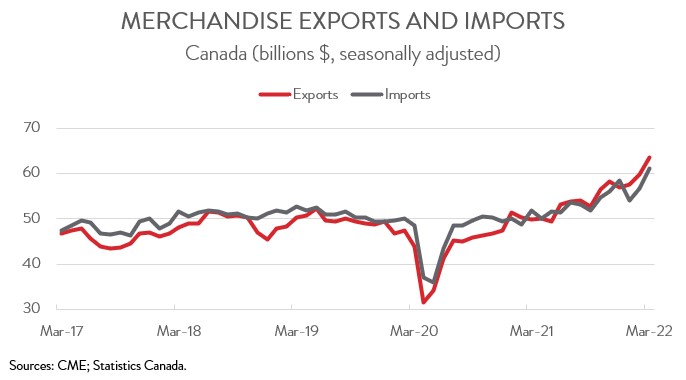 Looking ahead, this report hints that global supply chain disruptions may have been easing somewhat, but these issues could flare up once again due to renewed lockdowns in China. At the same time, while global demand for Canadian commodities should remain strong as countries look to replace Russian supply, demand for manufactured goods is expected to slow in line with decelerating global economic growth.

With imports outpacing exports, Canada’s merchandise trade surplus narrowed for the second straight month from $3.1 billion in February to $2.5 billion in March. Breaking these data down, our trade surplus with the U.S. widened from $10.9 billion in February to a record high of $12.6 billion in March. At the same time, our trade deficit with the rest of the world widened from $7.9 billion to an all-time high of $10.1 billion, with imports from China rising sharply. 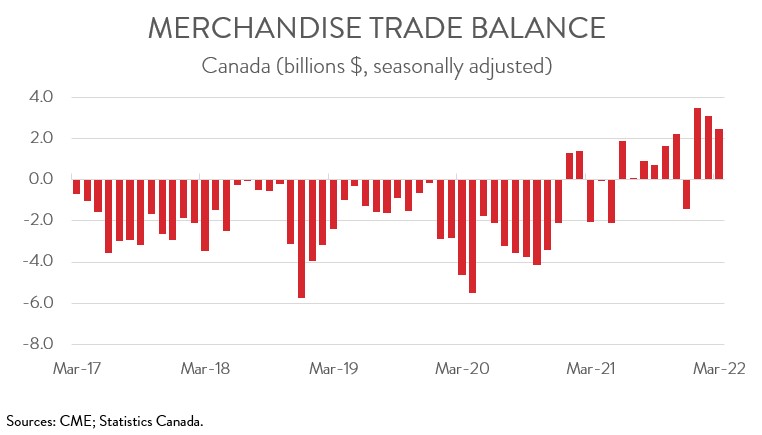 The increase in exports was broad-based, spanning 9 of 11 product categories. Exports of energy products jumped 12.8% to a record $17.9 billion in March, accounting for more than half of the increase in total exports. Exports of crude oil contributed the most to growth, as a sharp rise in prices more than offset a decline in volumes.

Exports of non-energy products were up 4.0% in March. Exports of motor vehicles and parts rose 7.9% to $6.7 billion in March. According to Statistics Canada, production of motor vehicles and parts increased throughout North America in March, as automakers enjoyed a reprieve from supply chain issues that have been constraining output for several months.

Exports of metal ores and non-metallic minerals increased 19.4% to a record $2.9 billion in March, with exports of potash contributing the most to the gain. Demand for Canadian fertilizers has increased since Russia invaded Ukraine and harsh sanctions were imposed on Russia, pushing Canadian exports of potash to record levels. 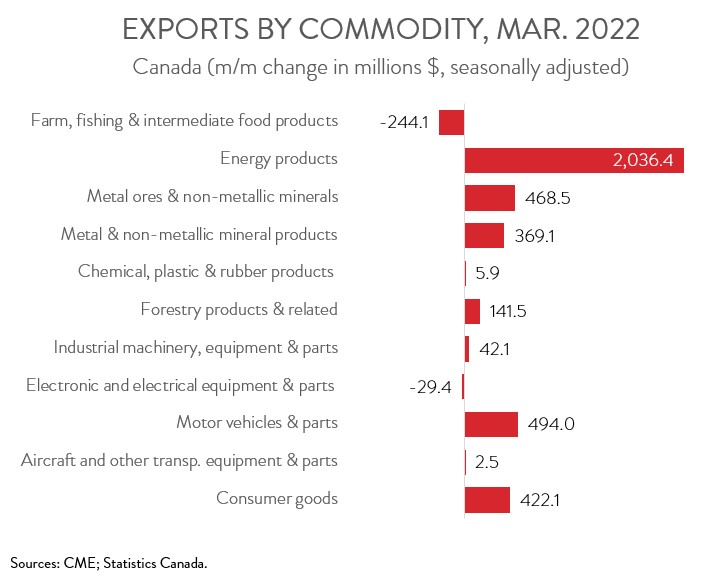 CANADIAN EXPORTS TO THE U.S. SURGE 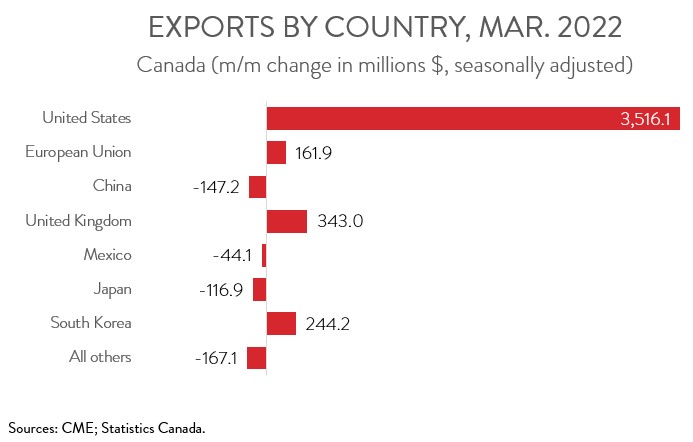