Canadian merchandise exports increased for the third straight month in July, up 11.1 per cent to $45.4 billion, leaving them 6.0 per cent below pre-pandemic levels. Merchandise imports rose at an even faster pace of 12.7 per cent to $47.9 billion, just 4.0 per cent shy of their February 2020 levels. In volume terms, exports and imports were up 8.6 per cent and 11.1 per cent, respectively. 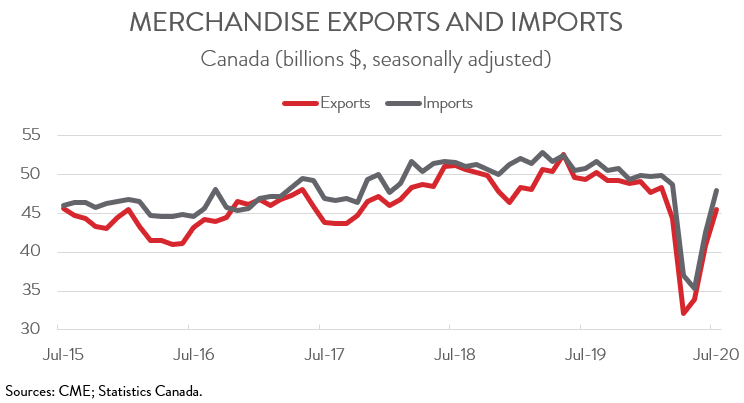 Canada’s merchandise trade recovery has been impressive to date, and volumes are fast approaching their pre-pandemic levels. However, economic growth prospects are highly uncertain and will remain so as long as COVID-19 is circulating without a vaccine, implying that the danger for Canada’s goods exporters from the pandemic is not yet over.

Notably, the V-shaped rebound in goods trade is in stark contrast to the L-shaped path that services trade has followed, given COVID-19’s massive impact on travel flows. According to Statistics Canada, exports of travel services in July were 61.5 per cent lower than they were in February, while exports of transportation services were 29.1 per cent below their February levels. In short, it is much easier for goods to cross the border than people. 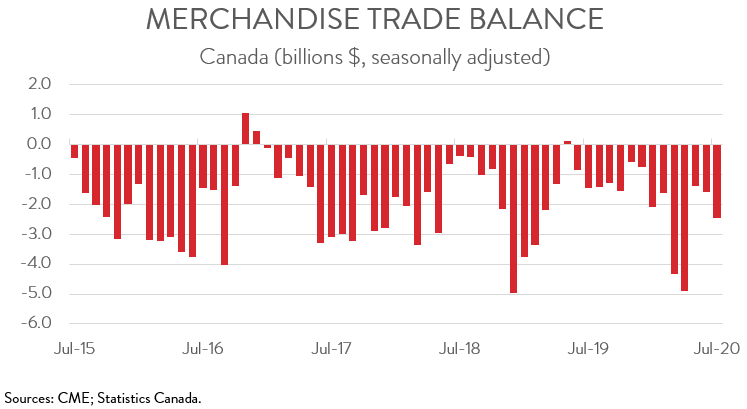 The July increase in exports was broad-based, spanning 10 of 11 major commodity groups. Exports of motor vehicles and parts rose 37.0 per cent to $8.2 billion, exceeding both their pre-pandemic and year-over-year levels. According to Statistics Canada, many automotive companies adjusted to the impact of COVID-19 by keeping their plants running during the traditional summer shutdown season. Therefore, this strong gain is unlikely to be sustained.

Exports of energy products increased by more than $1 billion to $6.4 billion, thanks to both higher prices and higher volumes. Although this was the third straight monthly gain, energy product exports were still 22.4 per cent below their February 2020 levels.

On the negative side, metal ores and non-metallic minerals exports fell by $77.0 million in July, their second decline in three months. At the same time, although exports of aircraft and other transportation equipment and parts increased 17.0 per cent to $1.8 billion, this was still one-third below the pre-pandemic level recorded in February. 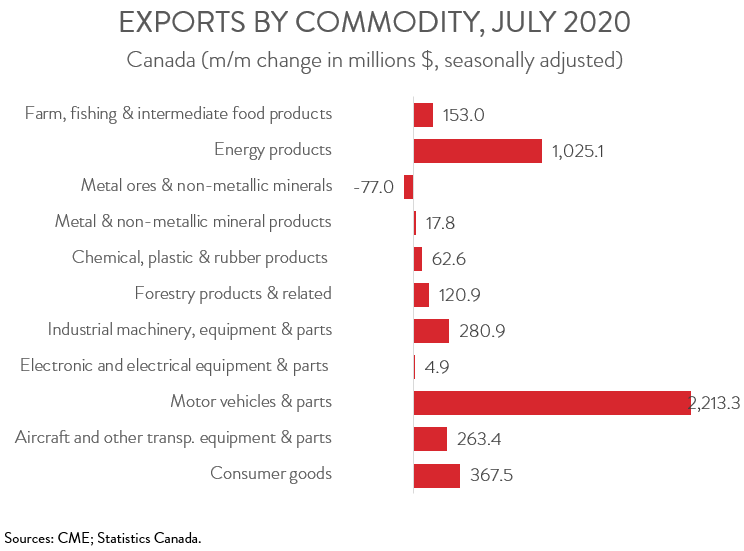 Canadian exports to the US jumped $4.4 billion in July, building on the $6.6 billion surge seen in June. Export levels to south of the border were down 7.2 per cent in July compared with February.

Exports to countries other than the US increased by $131.5 million to $11.9 billion in July, leaving them just 2.3 per cent lower than what they were in February 2020. Among Canada’s major trading partners, exports to Japan, the EU (excluding the UK), and Mexico increased, while exports to the UK, China, and South Korea fell. 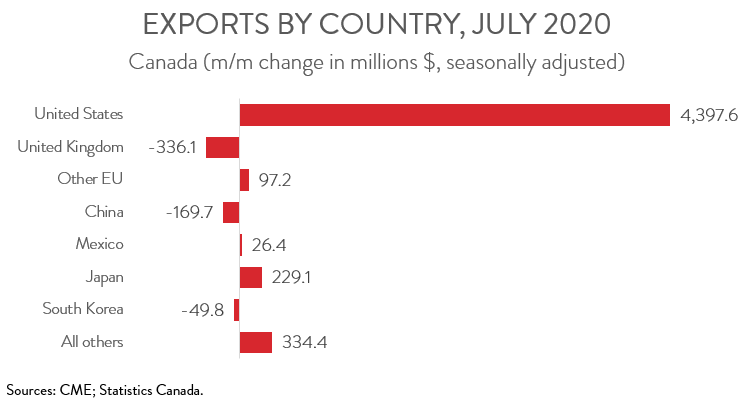