EXPORTS RISE 2.2 PER CENT IN OCTOBER

Canadian merchandise exports increased 2.2 per cent to $46.5 billion in October, leaving them 3.6 per cent below where they were in February 2020. Merchandise imports have recovered more quickly than exports. In fact, thanks to a 1.9 per cent increase in October, imports rose to $50.2 billion, lifting them above their pre-pandemic levels. The strength in imports has largely been driven by consumer goods, which hit a record $11.6 billion in October. In real or volume terms, exports and imports were up 1.3 per cent and 1.7 per cent, respectively.

Global merchandise trade has remained resilient in the face of rising COVID-19 cases, but activity will likely slow over the next few months with infections staying elevated and restrictions remaining in effect in several countries around the world. But, on a positive note, international trade should benefit from the vaccine rollout in 2021, although services will get a bigger lift than goods.

The trade deficit remained virtually unchanged in October at $3.8 billion, though this masked churn underneath. Canada’s trade surplus with the US widened from $1.7 billion in September to $3.0 billion in October, while its deficit with the rest of the world widened from $5.5 billion to $6.8 billion. 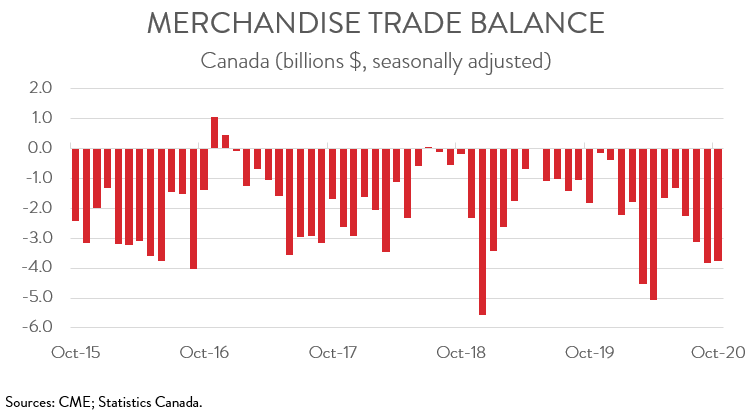 Export gains were relatively widespread, spanning 8 of 11 major product groups. Exports of consumer goods rose 10.2 per cent to $6.3 billion in October, following a sharp 6.2 per cent decrease in September. According to Statistics Canada, the increase was driven by a rebound in exports of pharmaceutical products.

Energy exports climbed 7.8 per cent to $6.7 billion, thanks to volume and price gains in both crude oil and natural gas exports. Nevertheless, despite this growth, exports of energy products were 19.2 per cent below their February 2020 levels.

On the negative side, exports of motor vehicles and parts fell 4.7 per cent to $7.3 billion. The decline was attributable to a 6.8 per cent drop in exports of passenger cars and light trucks, partly on a slowdown in production. Exports of metal ores and non-metallic minerals (-18.6 per cent) and aircraft and other transportation equipment and parts (-9.3 per cent) were also down on the month. In fact, aircraft and other transportation equipment and parts has experienced the slowest recovery among all the major product groups, with exports down 37.0 per cent compared with February. 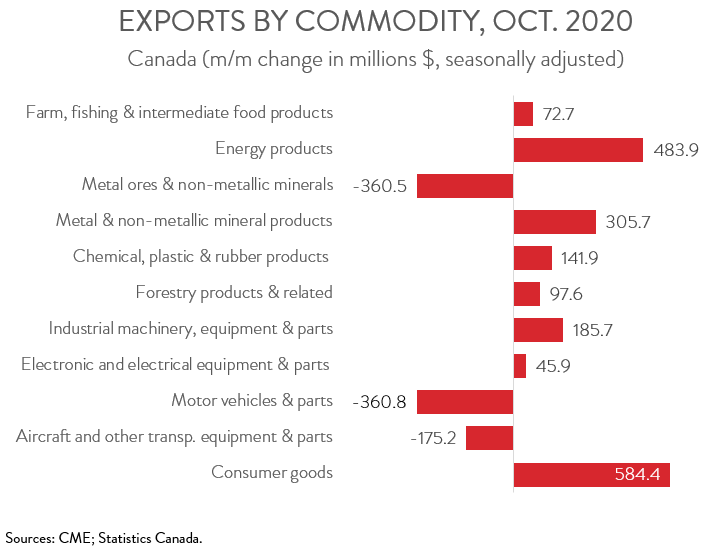 EXPORTS TO THE UNITED STATES BOUNCE BACK

Exports to the US increased by 2.0 per cent to $33.8 billion in October, partly erasing a 2.3 per cent decline in September. At the same time, exports to the rest of the world climbed by 2.7 per cent to $12.7 billion. Among Canada’s major non-US trading partners, notable increases to the United Kingdom and Japan offset declines to China, the European Unition, and South Korea.

Canadian trade to the rest of the world has recovered much more quickly than that with the US. In fact, while exports to countries other than the US have surpassed their pre-pandemic levels, exports to the US remain 6.2 per cent below where they were in February 2020. 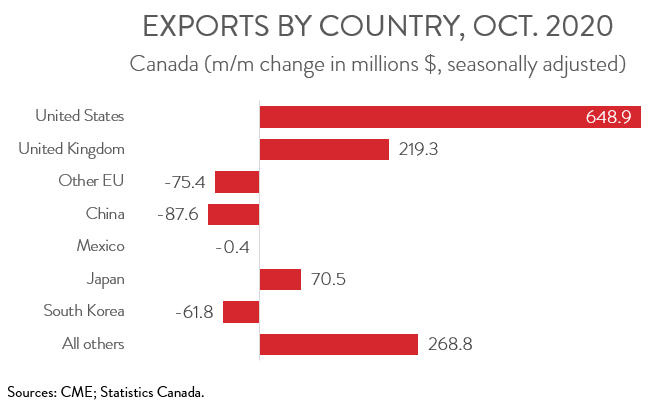