EXPORTS RISE A MODEST 0.5 PER CENT IN NOVEMBER

Canadian merchandise exports increased 0.5 per cent to $46.8 billion in November, while merchandise imports edged down 0.3 per cent to $50.1 billion. This left exports 3.1 per cent below where they were in February 2020. On the other hand, despite the decline, imports remained 0.1 per cent above their pre-pandemic levels. In real or volume terms, exports were up 0.9 per cent, while imports were down 0.8 per cent. 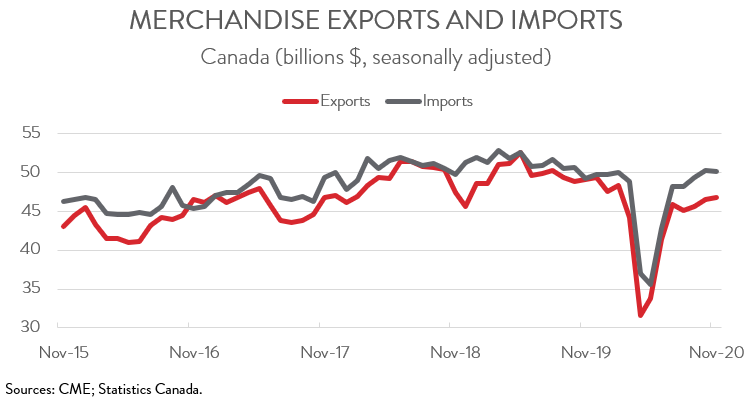 The November trade report included both good and bad news. While exports increased for the sixth time in seven months and the trade deficit narrowed, the headline gain was modest and masked the fact that 7 of 11 export categories posted declines. With many countries tightening restrictions to curb the spread of COVID-19, global trade activity will continue to face headwinds until vaccine rollouts ramp up. 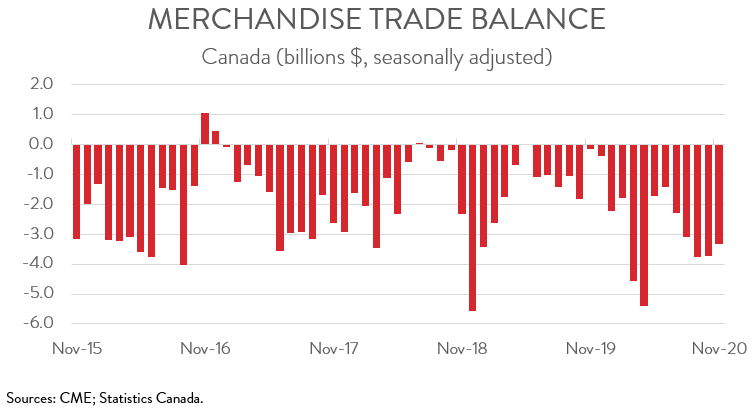 The rise in exports in November was limited to just 4 of 11 major commodity groups. Exports of metal and non-metallic mineral products led the way, rising 11.6 per cent to $6.2 billion. According to Statistics Canada, this increase was attributable to a surge in gold exports.

However, these gains were partly offset by lower exports of motor vehicles and parts, which fell 4.1 per cent to $6.9 billion. This was the third decline in four months. Exports of forestry products and building and packaging materials also fell in November, down 6.2 per cent to $3.8 billion. This was largely the result of a fall in lumber exports, which were down mainly on lower prices. 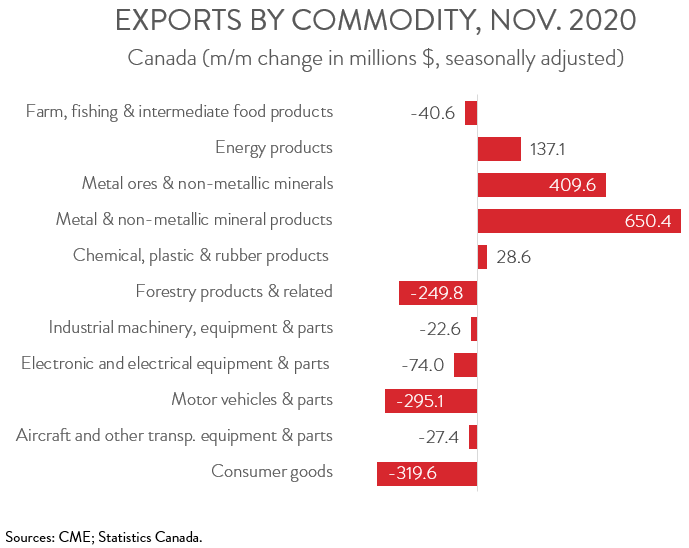 EXPORTS TO THE UK SURGE ON HIGHER GOLD SHIPMENTS, OFFSETTING DECLINE TO THE US

Canada’s trade activity with the US has recovered much more slowly than that with the rest of the world. Exports to the US fell 2.2 per cent to $33.1 billion in November, the second decline in three months. As a result, Canadian exports to the US were 8.3 per cent below their pre-pandemic levels. In contrast, exports to the rest of the world were up 7.4 per cent to $13.7 billion in November. This was the third highest level on record and 12.4 per cent above where they were in February 2020.

Thanks to the surge in gold shipments, the UK was by far the biggest contributor to the growth in Canada’s exports in November. In fact, exports to the UK were up by nearly $1 billion. Except for China, exports to Canada’s other major non-US trading partners were also up on the month, although the gains were much more modest. 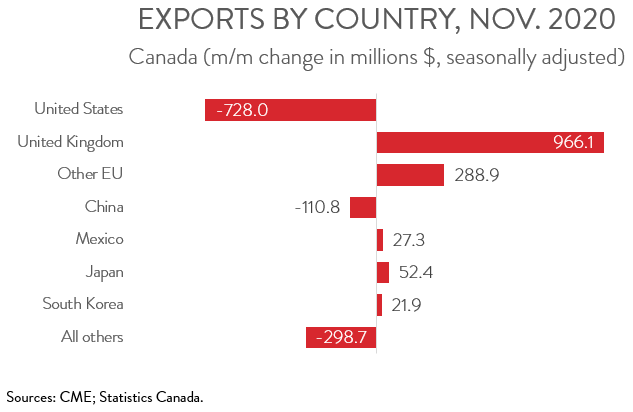