Canada Posts its First Trade Surplus Since May 2019, Thanks to Big Jump in Exports

Canadian merchandise exports jumped 8.1 per cent to $51.2 billion in January, while merchandise imports rose 0.9 per cent to $49.8 billion. For the first time since the start of the crisis, exports rose above their pre-pandemic levels. The picture was also encouraging after removing the effect of prices. On a volume basis, exports and imports were up 5.1 per cent and 1.0 per cent, respectively. 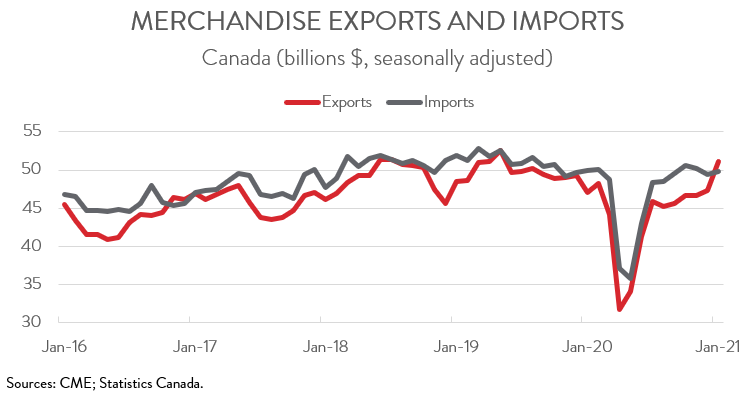 It is hard to imagine a better start to the year for Canada’s trade sector, and it comes as welcome news following a 12.4 per cent decline in 2020. While we cannot expect exports to maintain such a torrid pace, activity is expected to continue to recover through 2021 as global vaccination programs ramp up and as economic momentum builds.

Canada posted a trade surplus of $1.4 billion in January, the first since May 2019 and the largest since July 2014. Digging deeper, our trade surplus with the US more than doubled from $2.5 billion in December to $6.2 billion in January, the largest surplus since September 2008. On the other hand, Canada’s trade deficit with the rest of the world widened slightly from $4.5 billion to $4.8 billion. 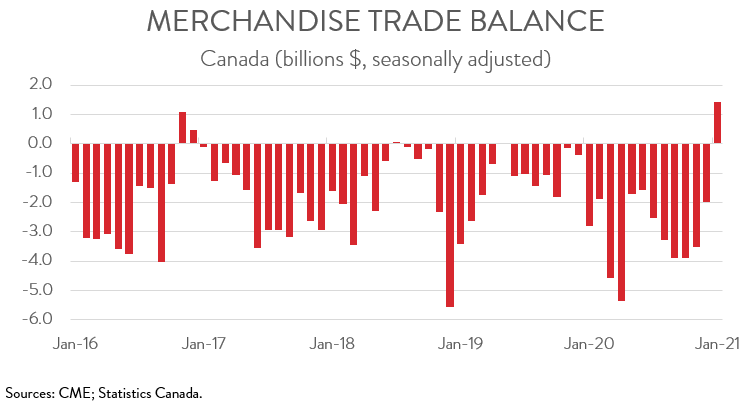 Exports increased in all 11 major commodity groups. Exports of aircraft and other transportation equipment and parts surged 72.3 per cent to $3.1 billion. A Canadian airline retired a large number of aircraft from its fleet in January and sold these used planes in the US. Given this was a large one-time sale, we should anticipate a decline in this category in February.

Consumer goods exports rose 11.6 per cent to $6.5 billion. This was the category’s largest increase in five years, and it was largely attributable to higher exports of gold bars sold at the retail level.

Exports of energy products climbed 5.9 per cent to $7.9 billion. The gain was mainly fueled by higher crude oil exports, thanks to both higher prices and volumes. This left energy product exports down 3.0 per cent and 6.9 per cent, respectively, from February 2020 and year-ago levels.

The forestry and building and packaging materials category continued its strong run, with exports climbing 10.7 per cent to $4.4 billion in January. Lumber exports spiked 30.4 per cent to reach a record high of $2.1 billion. Demand for lumber for renovations and new homes has surged during the pandemic. In fact, the value of lumber exports has more than doubled year-over-year. 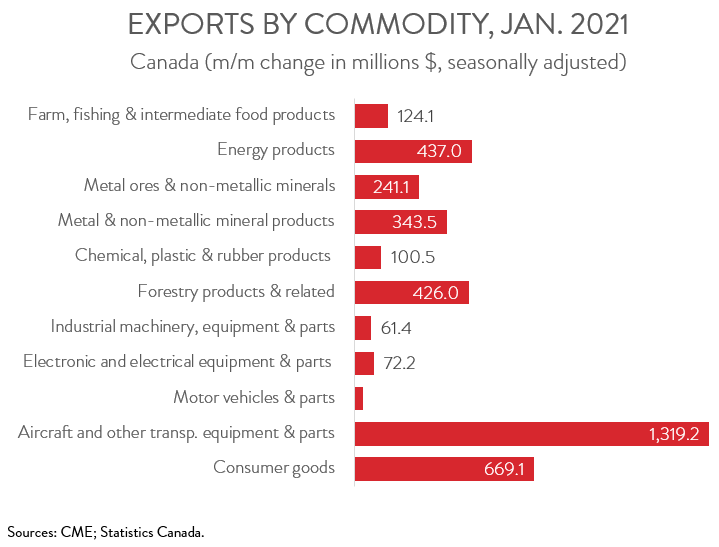 EXPORTS TO THE UNITED STATES HIT HIGHEST VALUE SINCE SEPTEMBER 2019

Exports to the US soared 11.3 per cent to $37.2 billion, hitting their highest value since September 2019. For the first time since the beginning of the pandemic, exports to the US were higher than February 2020 levels. Exports to countries other than the US, which reached a record high in December, edged up 0.3 per cent to $14.0 billion.

Among Canada’s major non-US trading partners, the results were mixed in January. Exports to Mexico, China, and Japan were up on the month, while exports to the EU, UK, and South Korea were down. The decrease in exports to the UK was attributable to lower shipments of aircraft, oilseeds, and gold. 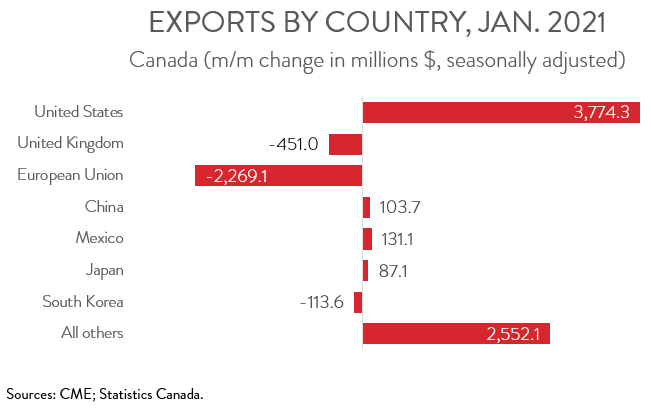