After a modest rebound to start the year, Canadian exports were down once again in February. Higher energy exports were not enough to offset broad volume-based declines in every other major product category.

All told, exports fell by 1.3 per cent in February, reaching a total value of $48.0 billion. That represents the sixth decline in exports in the last seven months. The only consolation is that there was a considerable upward revision to January’s export figures – amended from $47.6 billion to $48.6 billion. Even so, with February’s losses, exports remain 6.4 per cent below their July peak. 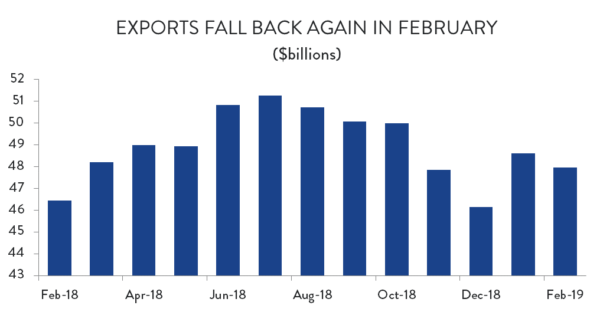 The story was much the same on the import side. Imports were down by 1.6 per cent in February, marking the sixth decline in the past eight months. Since exports fell by slightly less than imports, Canada’s trade deficit narrowed slightly in February – from (a revised) $3.1 billion in January to $2.9 billion.

February’s decline in exports was driven by sharply lower sales volumes. While export prices softened the blow with a healthy 2.6 per cent increase, volumes plunged by 4.1 per cent compared to January – the largest monthly decrease in eight years. 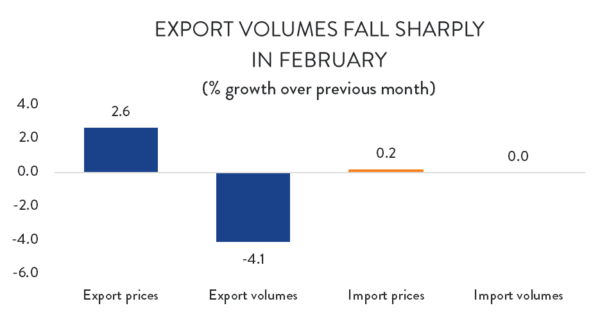 Meanwhile, there was little movement in import volumes and prices. The volume of goods coming into Canada was unchanged compared to January, while the average price of those goods rose by 0.2 per cent. The discrepancy between these figures and the fact that imports were down 1.6 per cent is a reflection of the mechanics of how volume- and price-based indices are calculated.

The decline in exports in February was remarkable widespread. Of the eleven main product categories, every single one was lower with the exception of energy, where higher prices helped exporters make significant gains. Crude oil exports were up 8.5 per cent compared to January ($483 million), natural gas exports jumped by more than 35 per cent ($389 million) and refined petroleum exports were nearly 20 per cent higher ($135 million). However, even with two months of solid growth, energy exports remain nearly 11 per cent below July’s levels. 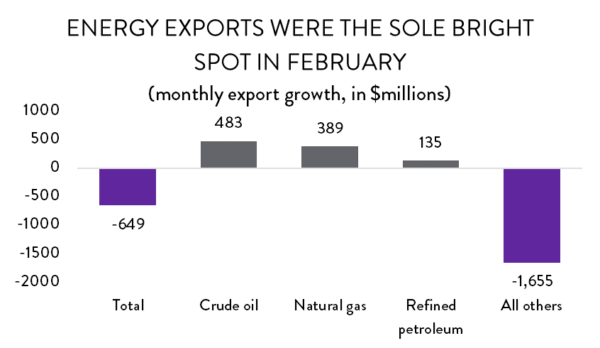 Those increases were easily offset by weakness elsewhere. Metal and mineral product exports were down 6.6 per cent ($366 million), motor vehicles and parts exports were 2.8 per cent lower ($210 million), aerospace exports fell by 6.1 per cent ($142 million) and industrial machinery equipment and parts exports decreased by 2.3 per cent (4.0 per cent). The only non-energy product category to emerge relatively unscathed was consumer goods, where exports fell by just 0.1 per cent. 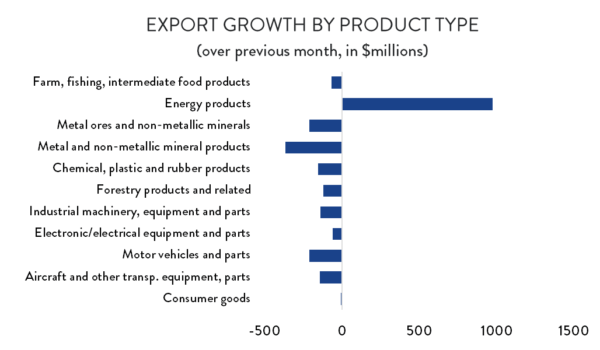 In terms of export destinations, Canada saw significant gains in deliveries to US customers in February, while there were significant losses in most other markets. That disparity is a direct result of the fact that the US is Canada’s near-exclusive destination for energy product exports. Exports to the US were up by $1.2 billion compared to January – an increase of about 3.5 per cent. 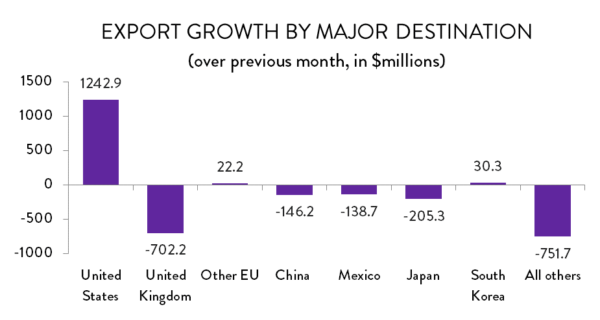 Elsewhere, the biggest decline was in exports to the UK, which plunged by 33 per cent ($702 million). While that decline seems alarmingly large, it simply reflects the return to more normal export levels after a large one-time delivery of gold to that country. Meanwhile, there were double-digit losses in exports to Japan (18.2 per cent) and Mexico (16.5 per cent), while sales to China, Saudi Arabia, the Netherlands and India were all down significantly as well.

Declines were relatively widespread on the import side as well, with Canadian purchases of foreign goods down in eight of the 11 major product categories. On a dollar-value basis, the largest decrease was in imports of metal and mineral products ($272 million, or 7.7 per cent). Clothing and household goods drove consumer product imports $200 million lower (1.9 per cent). However, most of February’s decline in imports was concentrated in industrial goods; purchases of foreign machinery and equipment, electrical appliances and related goods, and motor vehicles were all down significantly that month. 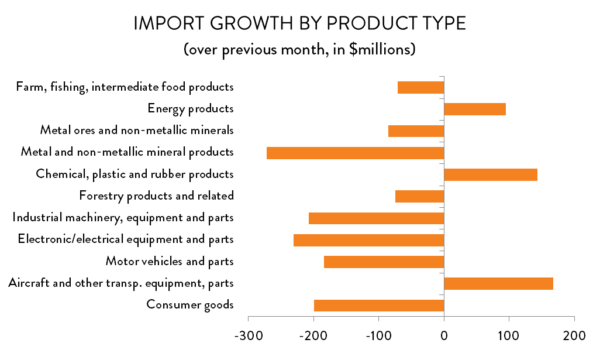 Meanwhile, for the second month in a row, the largest growth in imports came from the aerospace sector, where deliveries rose by $167 million (6.3 per cent), building on a $918 million in crease in January. There was also a notable increase in petrochemicals imports, as well as crude oil.

Offsetting those increases, imports from China were down significantly, falling by $435 million (10.2 per cent). Canadians also bought fewer goods from Mexico (a $250-million decline, or 14.1 per cent) and the EU ($229 million, or 4.0 per cent). Within the EU, the decline was concentrated in lower purchases of goods from Germany and the UK.