All told, exports fell by 2.9 per cent compared to October – their biggest month-over-month drop since July 2017. That decline pushed the total value of exports down to $48.3 billion – its lowest level since March and 5.3 per cent below its July peak of $51.0 billion. 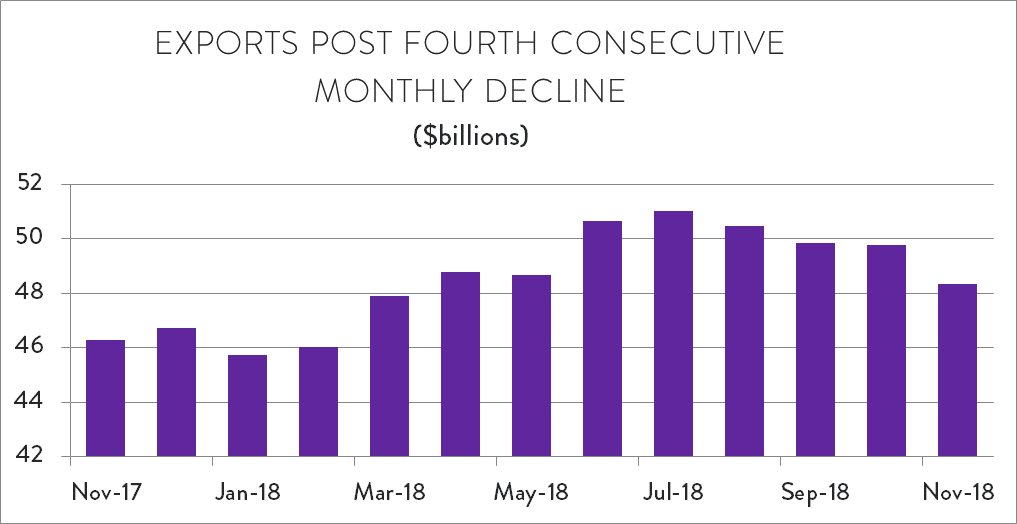 Imports were also down again, although the decline was less severe. Canadian consumers paid more for foreign goods but bought fewer of them. Import prices were up by an average of 1.0 per cent in November, but volumes fell by 0.4 per cent. Those effects combined to drive overall imports 0.5 per cent lower, to hit $50.4 billion for the month. Imports into Canada have been trending steadily downward since March.

However, since exports once again fell faster than imports, Canada’s trade deficit widened in November. The silver lining here is that adjustments to October’s trade figures meant that that month’s trade deficit was actually much smaller than first thought. Last month it was reported that Canada posted a $1.2 billion trade deficit in October. That imbalance was adjusted to $851 million, but then expanded to an estimated $2.1 billion in November – Canada’s largest monthly trade deficit since May.

As noted last month, the decline in oil prices is a major concern for Canada’s short-term outlook for export growth and our international trade balance. Canada is a significant net exporter of crude oil and other energy products, while it carries a yawning trade deficit elsewhere. Effectively, the energy sector has been working overtime to minimize the net outflow of cash from the Canadian economy. Further declines in oil prices will only accelerate that outflow. 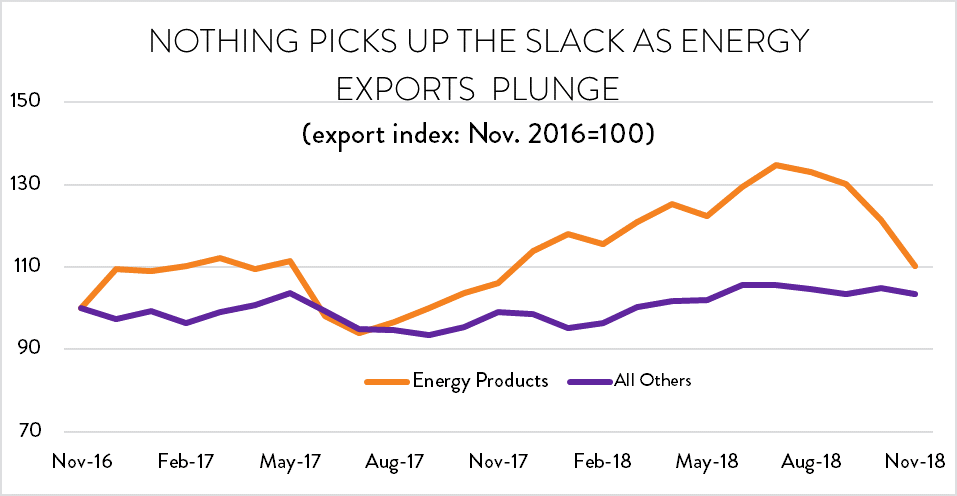 November’s decline in exports was about more than just oil prices. Although crude oil export prices did fall by more than 13 per cent in November, the impact was compounded by a 4.4 per cent reduction in export volumes as well. At the same time, refined petroleum export prices fell by 4.6 per cent, while volumes were nearly 11 per cent lower compared to October.

Moreover, it wasn’t just energy exports that were weak in November. Export volumes were down for a wide range of goods, including agricultural and forest products, primary metals, motor vehicles and aerospace products. All said, export volumes fell by 1.8 per cent in November, compounded by a 0.8 per cent decline in average export prices. 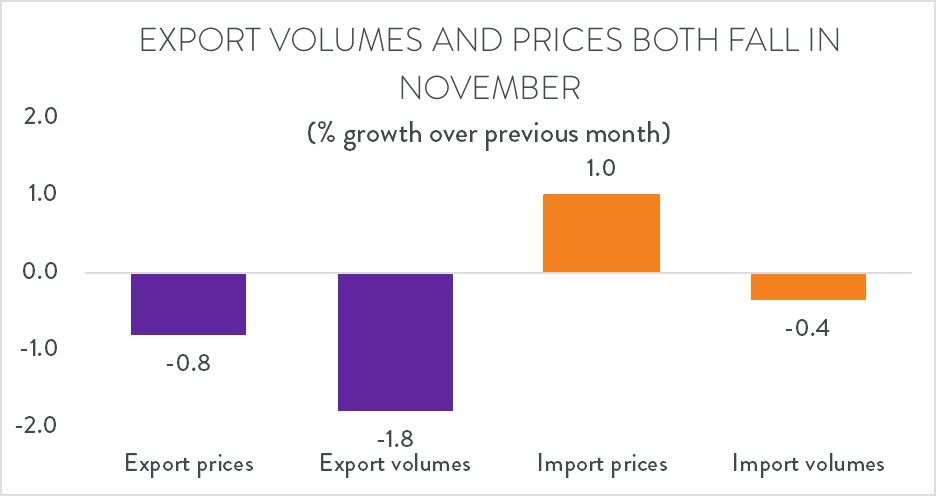 As a result, while weak energy exports were the big story in November, there were signs of trouble all over. Of the 11 major product categories, only three saw exports increase compared to October. Industrial machinery and parts exports led the way, with growth of 3.3 per cent ($110 million), while  pharmaceuticals and household products drove overall consumer goods exports 2.2 per cent higher ($125 million). There was also a small increase in exports of metal/mineral products that month. 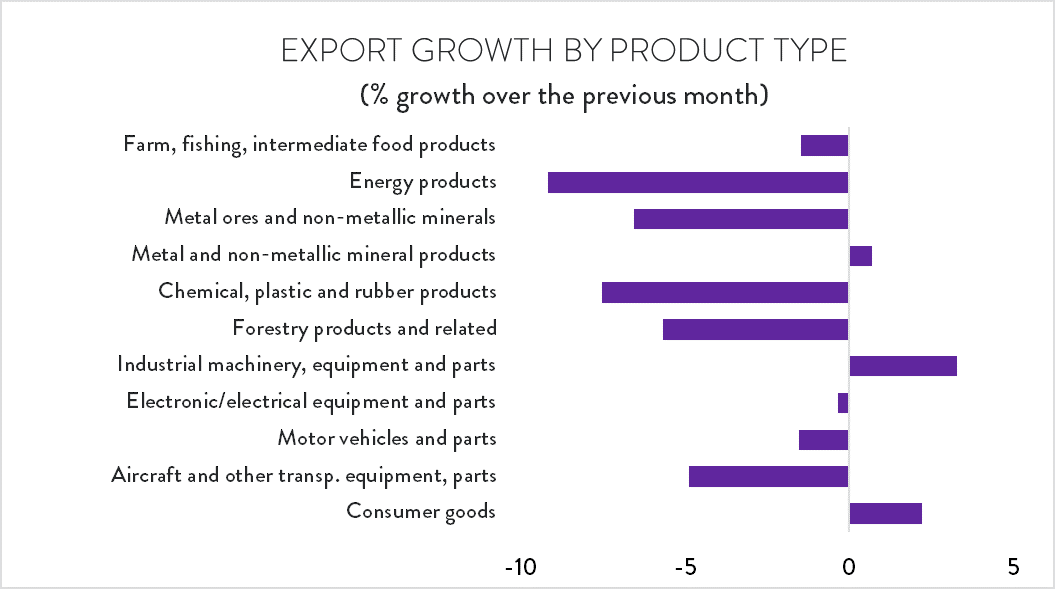 Meanwhile, it was red ink elsewhere. The combination of price and volume effects drove energy exports 9.2 per cent lower ($854 million). That number was actually substantially lower for crude oil and refined petroleum, but it was partially offset by a spike in natural gas and coal exports. Foreign shipments of chemicals, forest products and primary metals were also all down significantly, while exports of cars, planes and related parts gave back some of October’s gains.

Unsurprisingly, given that Canada’s energy exporters are captive to the US market, the decline in crude oil shipments drove US-bound exports down sharply once again in November. Exports to that country fell for the fourth consecutive month, this time dropping by nearly $1.5 billion (3.9 per cent). US-bound exports have fallen by $2.6 billion since July. Sales to Canada’s other major export destinations were also down in November. The sole bright spot was a spike in sales to the United Kingdom; whenever that happens, it’s usually the result of large-scale one-time gold deliveries. 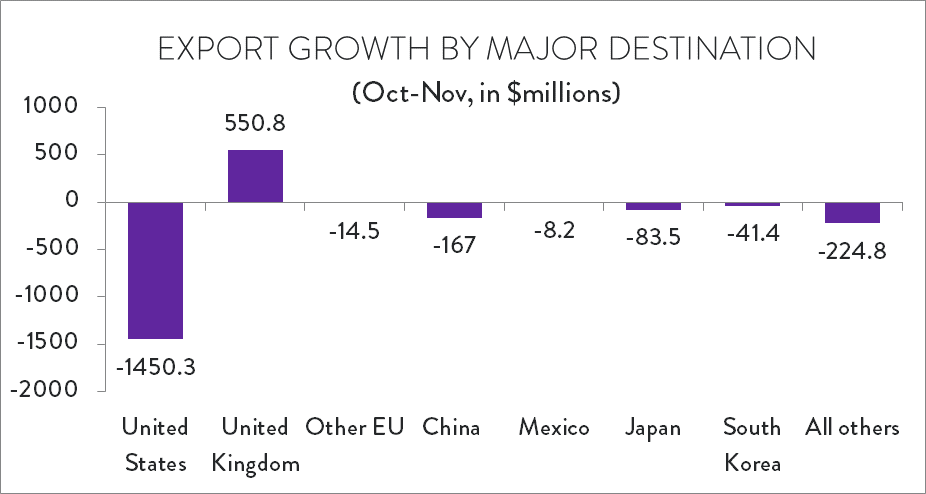 Imports into Canada were largely to the down side as well, with Canadian purchases rising in just four of the 11 major product categories. The only one of those four to make noteworthy gains was aerospace and parts, where imports jumped by $375 million (21 per cent) compared to October. For most other product types, imports were lower. The largest declines were in motor vehicles and parts (down $252 million), raw metals and minerals ($242 million) and consumer goods ($217 million). 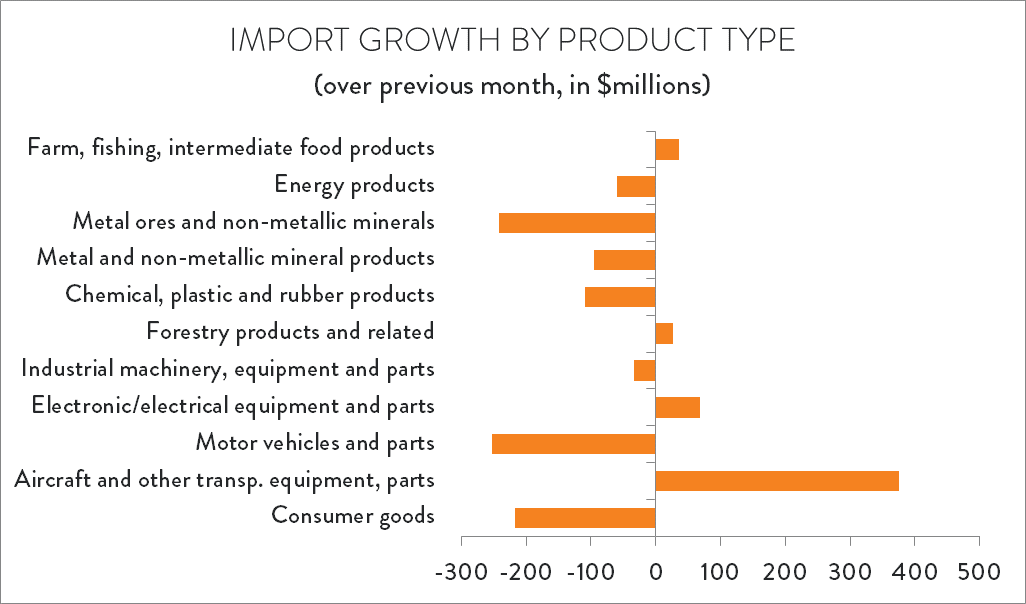 Canadians purchased more goods from China and Japan in October. Imports from those countries were up by $137 million and $115 million, respectively. Those gains were offset by lower imports from Russia, Switzerland, Mexico and the United States.