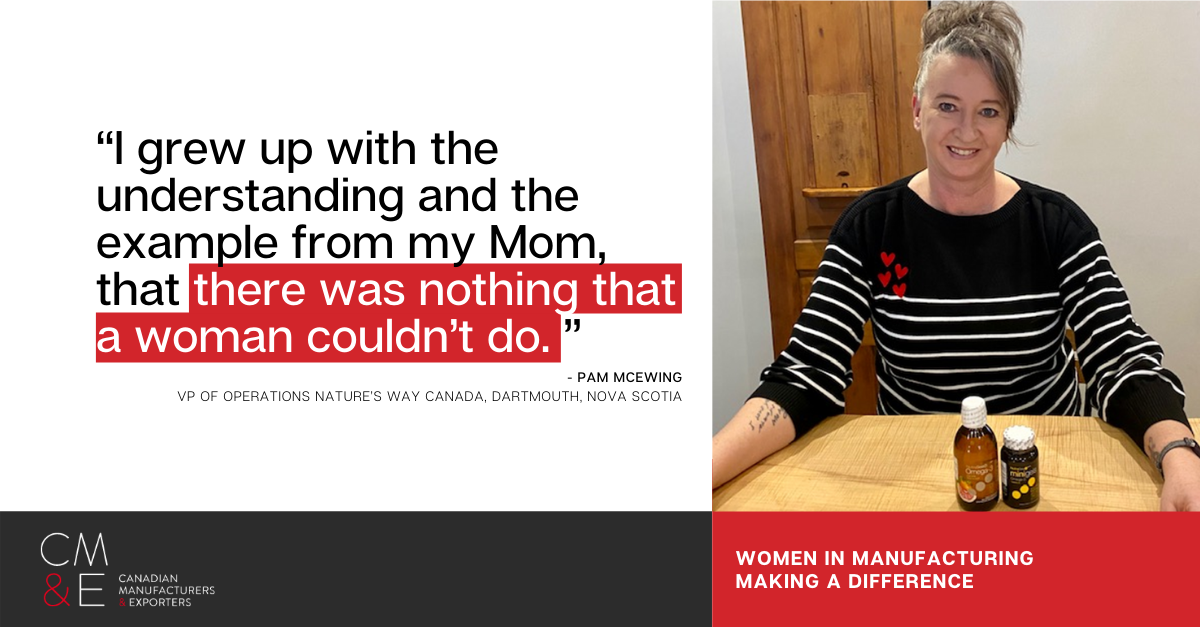 Based in Dartmouth, Nova Scotia, Nature’s Way Canada is a manufacturer of natural health products, with 70 employees.

Experience in the manufacturing sector:

Six years in manufacturing, and McEwing has indirectly supported manufacturing since 2002 having worked for a large, bottled water plant in Ontario.

As a leader, McEwing’s philosophy is one of trust, support and arming her team with the confidence to make good decisions. She’s collaborative in her approach, encouraging conversation, input, and feedback. “I always want my team members to be involved,” she says.

McEwing earned a degree in environmental studies. Although she didn’t go into that field, she brings that training to her role at Nature’s Way. “The idea of sustainability and sustaining the earth has always been important to me,” she says. “It translates into the way I work. I don’t want to waste things … I want to be efficient and that leads to cost savings, reduction in waste and reduction on energy.” As a company, Nature’s Way dedicates one per cent of its sales from its Omega-3 products to environmental organizations, including Nova Scotia’s Nature Trust and the David Suzuki Foundation.

How she does it:

McEwing grew up on her family’s beef farm in southwestern Ontario, the youngest of three daughters. She and her sisters would often outwork the boys her father hired to help bring in the hay or other jobs around the farm. There was nothing that they couldn’t do, and as a result, she’s always felt comfortable around trucking, distribution, and manufacturing.

“I grew up with the understanding and the example from my Mom, that there was nothing that a woman couldn’t do,” she says.

“I have always been drawn to an operations type of role. I’ve spent my whole life in trucking, warehousing … always supporting production in purchasing or distribution. So, it was a nice evolution to go to Nature’s Way and have production as a part of my role,” she says. “I think that it’s really fulfilling that every day we are making something out of nothing.”

Advice for her younger self:

The values and work ethic that were instilled in you growing up will never fail you. Trust in them.

McEwing gets involved in her community. She has sat on the board of a women’s shelter; been a volunteer firefighter and coached her children’s sports teams.

Right now, she is also volunteering for the North American Indigenous Games that are taking place in Nova Scotia in the summer of 2023. She is the project manager, in charge of logistics for the events, scheduling, and booking venues.

She also competes as a master’s athlete in track and field. “I throw things,” she says, listing off shot put, hammer, and discus. “My son does it too, so it’s something we do together.” Last year, she had the longest hammer throw in Canada for her 50-to 55-year -old age group.

McEwing listens to podcasts by Brené Brown. She says she likes Brown’s approach to conflict, and how she supports people. “It’s good sound advice. There is no arrogance about her. She is just real.” McEwing is also a huge Toronto Raptors’ fan.