Pace of Economic Growth Continued to Slow in August

ECONOMY GROWS 1.2 PER CENT IN AUGUST 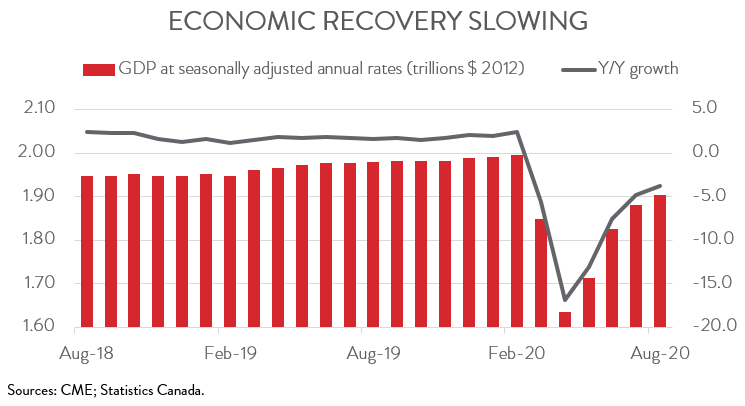 Today’s GDP report is consistent with expectations that Canada’s economy rebounded at an annualized rate above 45 per cent in the third quarter, recovering a significant chunk of the losses suffered during the second quarter. But the data also show that the recovery was slowing following the initial bounce from widespread re-openings in the late spring and early summer. Fading pent-up demand, along with rising COVID-19 infections and renewed restrictions, are the main factors contributing to this weakening growth. Accordingly, recouping the remaining one-quarter COVID-related losses is going to be a long and tough slog. Indeed, the economic recovery will remain challenging until a vaccine or effective treatment is widely available. 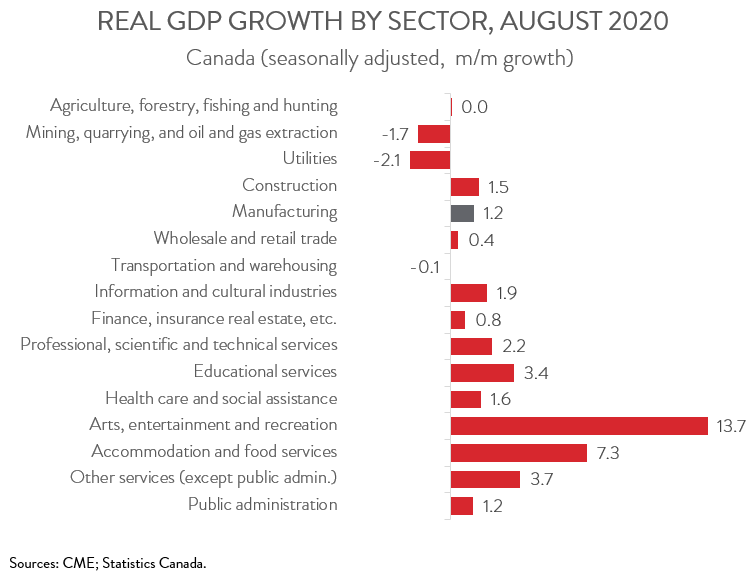 Output in the public sector, which includes educational services, health care and social assistance, and public administration, rose 1.9 per cent in August. Educational services posted the strongest growth of the three, with output up 3.4 per cent. This gain was attributable to efforts by school boards to prepare classrooms for the return to school under COVID-19 protocols.

Output in finance, insurance and real estate rose 0.8 per cent. Following three months of double-digit increases, activity at the offices of real estate agents and brokers expanded by a further 8.6 per cent in August. This string of robust gains pushed the subsector’s output to a record high, indicative of a hot resale housing market.

On the negative side, output in the mining, quarrying, and oil and gas extraction sector fell 1.7 per cent in August, its fourth decline in six months. Oil and gas extraction output was down 3.9 per cent, as the industry continues to feel the pain of low oil prices and depressed demand.

MANUFACTURING OUTPUT UP 1.2 PER CENT IN AUGUST

The manufacturing sector matched the performance of the overall economy in August, as its output also rose 1.2 per cent, its fourth consecutive monthly increase. However, manufacturing’s recovery has been slightly stronger than the industry aggregate. As of August, the sector had recouped 84.6 per cent of its COVID-related losses, leaving output 4.4 per cent below its February 2020 level. 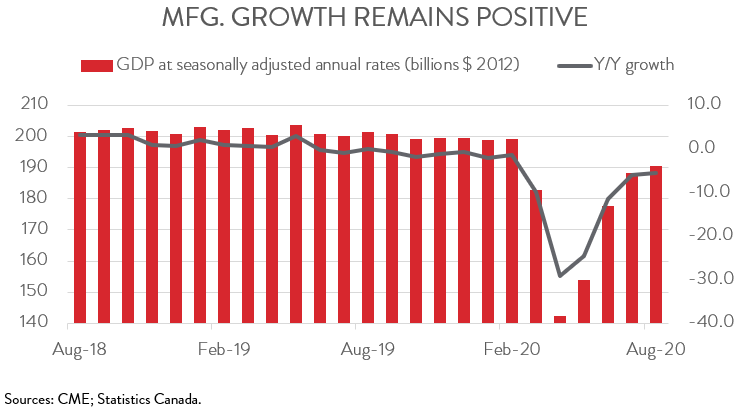 GAINS IN MANUFACTURING WERE UNEVEN

The manufacturing gains were uneven, with output up in just 5 of 11 major subsectors. Machinery manufacturing boasted the largest increase, with its output climbing 9.4 per cent. This was followed by the wood products industry, which enjoyed an 8.7 per cent gain, pushing output to 12.5 per cent above its pre-pandemic level. This sector continues to benefit from high prices and strong demand. Meanwhile, aerospace output advanced 2.9 per cent, its third straight monthly gain. The aerospace industry has now recovered two-thirds of its COVID-induced losses.

On a negative note, plastics and rubber products contracted 11.1 per cent in August. Despite this decline, output remained close to pre-pandemic levels. Meanwhile, following three straight months of rapid gains, motor vehicle and parts output was down 1.6 per cent. At the same time, petroleum and coal products output fell 3.7 per cent, in line with the struggles of the oil and gas industry. 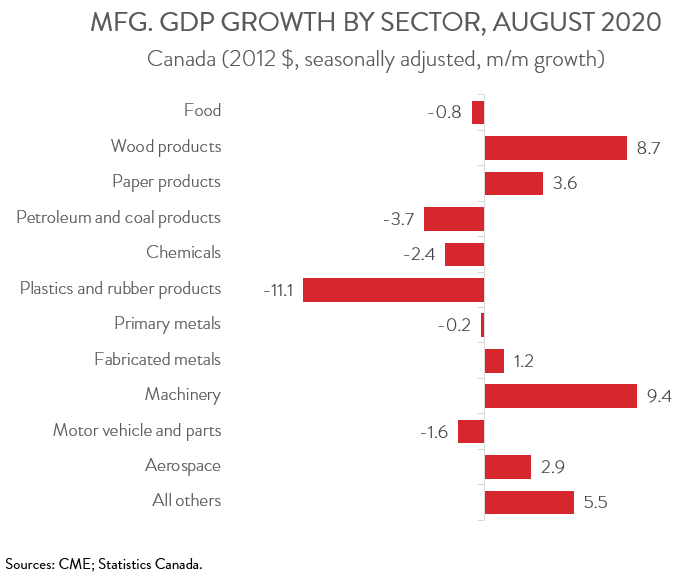