REAL GDP INCREASES AN ANNUALIZED 40.5 PER CENT IN THIRD QUARTER

Real GDP in Canada rose at a record annualized pace of 40.5 per cent in the third quarter, partly erasing a record drop of 38.1 per cent in the second quarter and a 7.3 per cent decline in the first. 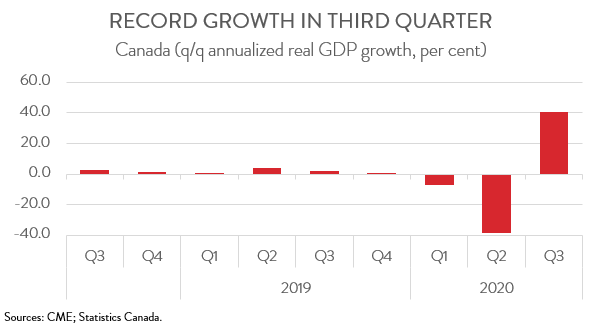 The record third quarter increase in GDP was not a surprise, nor was the fact that it only partly recouped the substantial losses experienced over the first half of 2020. Unfortunately, a full recovery is still far off. Economic momentum has been fading since late summer as pent-up demand peters out and COVID-19 cases climb. Indeed, an advance estimate pegs October GDP growth at just 0.2 per cent. Although the pending arrival of vaccines has brought hope for a brighter future, the next few months will be difficult for the Canadian economy.

The third quarter increase in GDP reflected the easing of lockdown measures and unleashed pent-up demand, which resulted in significant upturns in residential investment (+30.2 per cent) and household spending on durable goods (+38.0 per cent). In fact, growth was so strong in both these categories that their output surged above fourth quarter 2019 levels.

Export volumes were also strong in the third quarter, rising 14.5 per cent, but the gain was not enough to fully offset the 20.3 per cent decline seen in the first half of the year. They also increased at a slower pace than imports (+20.9 per cent), resulting in net trade weighing on the third quarter GDP calculation. 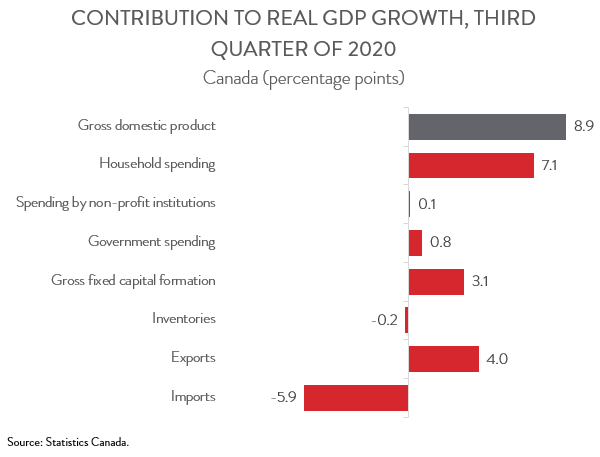 Likewise, while non-residential business investment also rebounded in the third quarter with an increase of 7.0 per cent, it paled in comparison to the almost 17.0 per cent decline seen in the first six months of the year. Businesses also drew down $33.1 billion of inventories in the quarter, pushing the inventory-to-sales ratio down to 0.845, the lowest since the fourth quarter of 2018.

ECONOMY EXPANDS 0.8 PER CENT IN SEPTEMBER

Turning to the monthly data, real GDP expanded by 0.8 per cent in September, the slowest pace of growth since the recovery began in May. This fifth straight monthly increase left activity 4.6 per cent below February’s pre-pandemic level. Statistics Canada’s advance estimate indicates that real GDP growth slowed even further in October to 0.2 per cent. 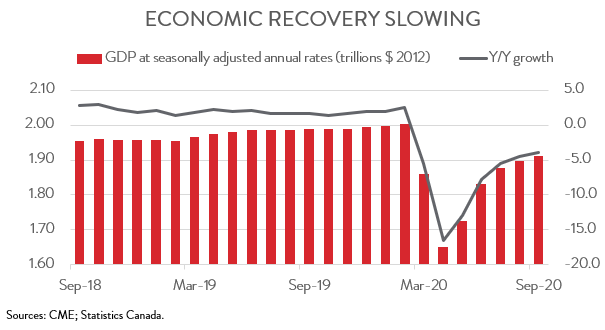 Output increased in 13 of 16 major industries in September. The mining, quarrying, and oil and gas extraction industry made the biggest contribution with output growth of 4.1 per cent. The gain was due to a 4.9 per cent expansion in oil and gas extraction, which more than made up for a 1.3 per cent fall in mining and quarrying. Despite this growth, output in this industry in September was 15.0 per cent below its February 2020 level.

The public sector expanded 0.8 per cent in September, thanks to positive contributions from all three of its subcomponents—health care and social assistance, educational services, and public administration. Educational services activity was particularly strong, as elementary and secondary students returned to school both in-person and virtually.

On a negative note, construction output fell 1.2 per cent in September, as activity in non-residential construction tumbled 9.5 per cent, overwhelming a 1.4 per cent advance on the residential side. At the same time, utilities output contracted 1.9 per cent, as growth in natural gas distribution was more than offset by a fall in electric power generation, transmission and distribution. 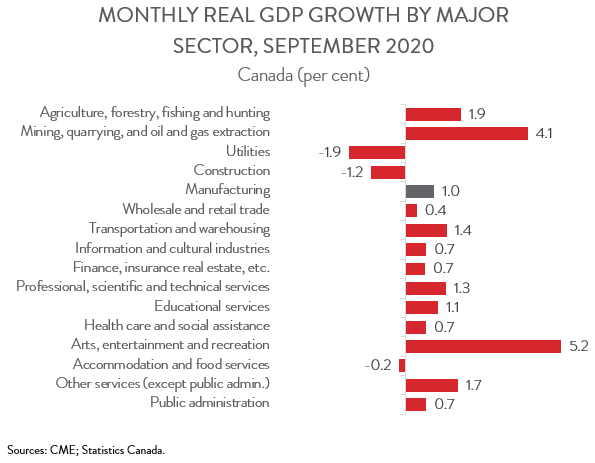 The manufacturing sector rose 1.0 per cent in September, its fifth straight monthly increase, leaving output 3.3 per cent below its February 2020 level. On a quarterly basis, output increased at a blistering annualized rate of 98.5 per cent, partially rebounding from consecutive declines of 11.8 per cent and 52.9 per cent, respectively, in the first and second quarters. 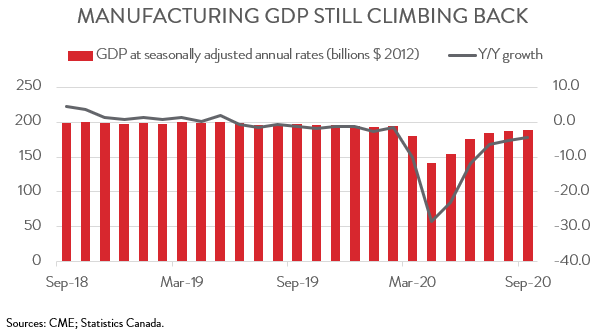 The gains in manufacturing were also widespread, spanning 9 of 11 major subsectors. Petroleum and coal products boasted the steepest increase at 6.8 per cent. The fabricated metal products industry was another bright spot, with output climbing 3.3 per cent. However, despite these gains, both sectors have experienced the slowest recoveries to date within manufacturing, with their output in September about 16.0 per cent below pre-pandemic levels. While output fell in both food and primary metal products, the declines were limited to 0.5 per cent and 0.3 per cent, respectively. 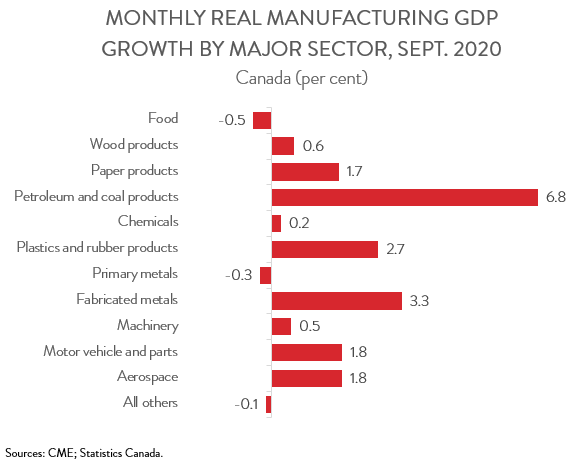