Economy Grows at a Solid 5.6% Annual Rate in First Quarter, Manufacturing Output Up 0.5% in March

Real GDP in Canada rose at an annualized pace of 5.6% in the first quarter (1.4% non-annualized), building on strong gains in the last half of 2020. Though solid, the first quarter reading was below expectations, largely due to a surprisingly big drawdown in inventories. With these three consecutive quarterly gains, real GDP was down 1.7% compared to the fourth quarter of 2019. 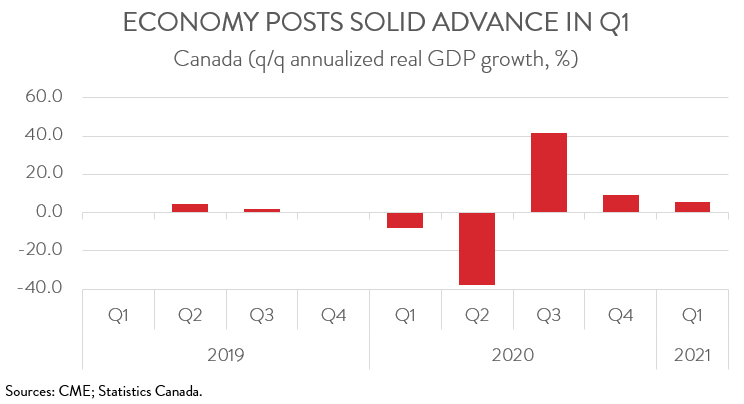 Although the first quarter GDP print came in below expectations, it will not result in a dramatic change to the 2021 outlook. While second quarter economic activity has been soft, due to the third wave of the virus and accompanying containment measures, the worst appears to be behind us. Widespread vaccinations, which are helping to limit infections, should set the stage for robust third quarter growth.

The housing market was a key driver of growth in the first quarter, fueled by an improved labour market, higher compensation of employees, and favourable mortgage rates. Housing investment rose 9.4%, building on gains of 29.6% in the third quarter and 4.0% in the fourth quarter of 2020.

Real household spending increased 0.7% in the first quarter, with outlays for durable, semi-durable, and non-durable goods all rising solidly. The 1.4% expansion in durable goods spending was largely due to higher purchases of new trucks, vans, and sports utility vehicles. 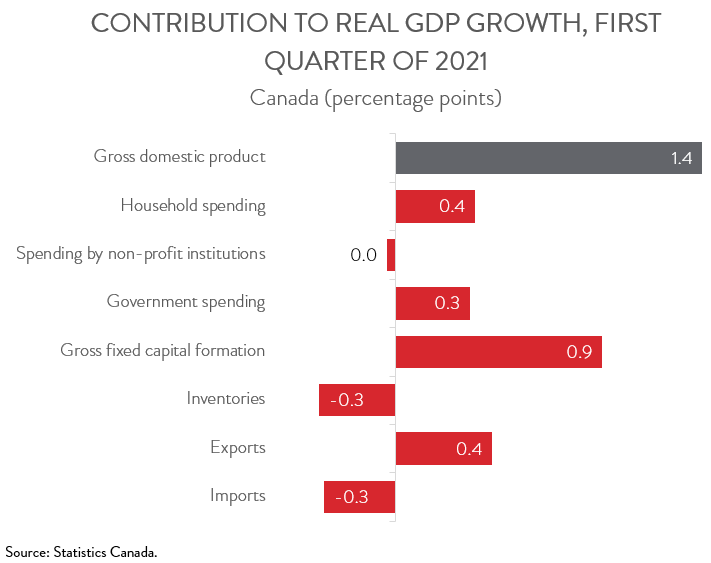 Turning to the monthly data, real GDP rose 1.1% in March, up for the eleventh month in a row. Unfortunately, the streak of consecutive monthly gains appeared to have ended in April. A Statistics Canada flash estimate indicates that real GDP fell 0.8% that month, the first decline since a steep fall last April. 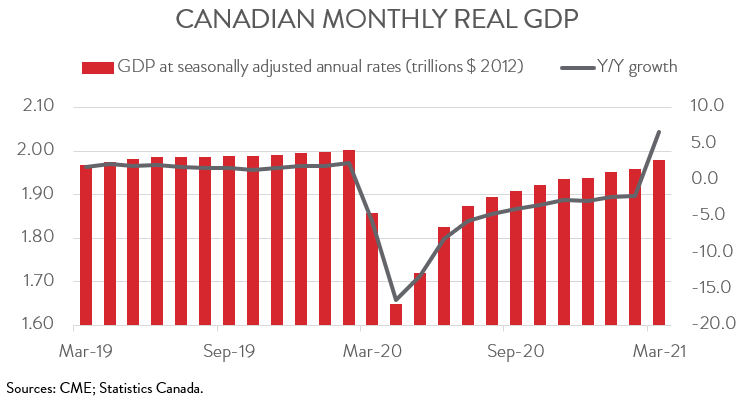 The GDP gains in March were broad-based, spanning 16 of 17 major industries. Retail trade led the way with 3.7% output growth, thanks to the continued easing of restrictions and above seasonal temperatures, the latter of which helped fuel strong activity at building material and garden equipment and supplies retailers.

Construction rose 2.2% in March, the fourth straight monthly increase. All subsectors were up, with residential building construction contributing the most to growth.

Wholesale trade expanded 1.8% in March, more than offsetting a 1.4% decline in February. The gains were led by building material and supplies wholesaling.

Accommodation and food services expanded 5.0% in March. The increase was driven by an 11.0% gain in accommodation services, which coincided with the start of the mandatory hotel quarantine program for air travelers arriving in Canada. 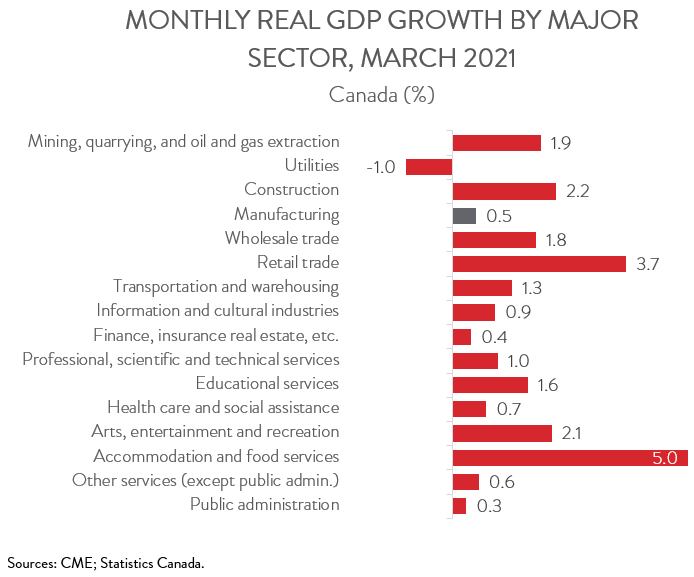 MANUFACTURING UP 0.5% IN MARCH 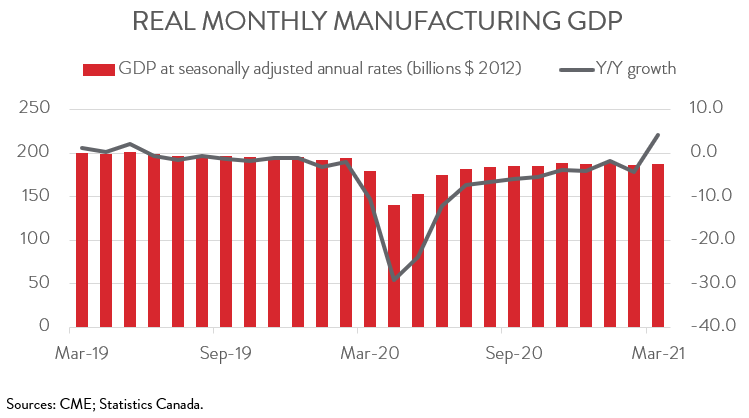 Manufacturing output was up in 7 of 11 major subsectors. Motor vehicle and parts output rose 5.1%, its first increase in six months. The industry continues to be battered by a global shortage of semiconductors, but it enjoyed a temporary reprieve in March. However, even with this gain, the industry’s output was 14.6% below the pre-pandemic level. Among major manufacturing subsectors, only aerospace is further from a full recovery.

The plastics and rubber products industry also had a strong month, with output up 4.4% in March. This partly made up for a 6.7% decline in February. In more good news, petroleum and coal products output rose 4.0%, up for the second month in a row.

On the negative side, after declining 2.5% in February, food manufacturing output fell an additional 1.9% in March. This was the industry’s worst two-month performance since the deep dive last spring. At the same time, output in the chemicals sector contracted 2.2%, following a 1.1% decline in February. Output was also down in March in machinery (-1.5%) and in aerospace (-0.3%). 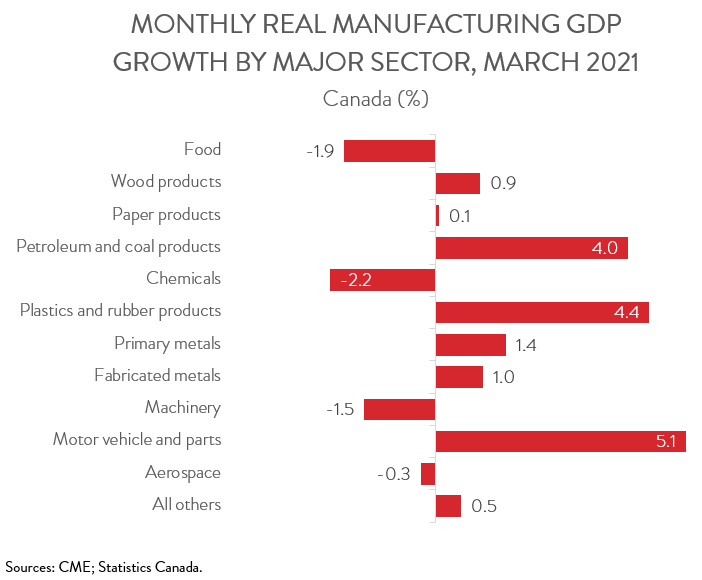