After edging down by 0.1% in July, Canadian real GDP rose 0.4% in August. This left total economic activity 1.4% below February 2020’s pre-pandemic level. Preliminary information indicates that real GDP was essentially unchanged in September, suggesting that the economy increased only 0.5% in the third quarter (about 1.9% annualized). 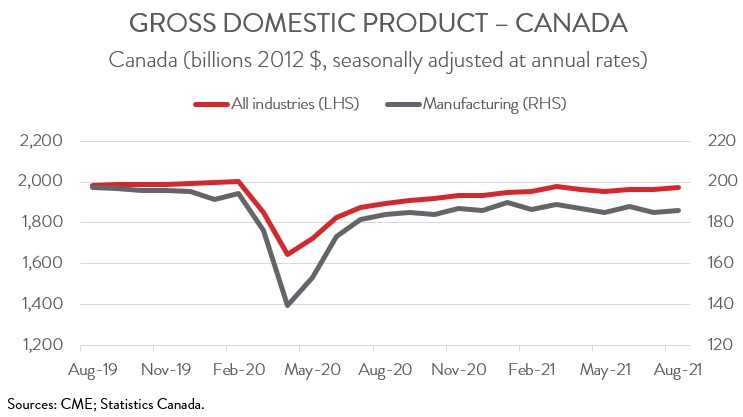 This was overall another disappointing GDP release for Canada, as growth in August came in below consensus expectations of 0.7% and a preliminary estimate pointed to a flat reading in September. As a result, it looks like the economy posted only modest growth in the third quarter, after declining in Q2. In recent weeks, CME has downgraded its 2021 forecast for the Canadian economy from 6.0% to 5.0%. Unfortunately, another downgrade could be in the cards when the official third quarter figures are released on November 30.

The gains in August were broad-based, spanning 15 of 20 industries. Industries that rely on face-to-face interactions saw strong growth as public health restrictions continued to be eased. Accommodation and food services output increased 7.0%, as the sector continued to recover some of the ground lost since the beginning of the pandemic. Arts, entertainment and recreation output climbed 6.4%, as all forms of activities were up. Transportation and warehousing output grew 1.2%, its third consecutive monthly increase. The gains were led by air transportation, which posted its sixth straight double-digit monthly increase. After contracting 0.6% in July, retail trade rose 1.8% in August, with food and beverage stores contributing the most to the increase. 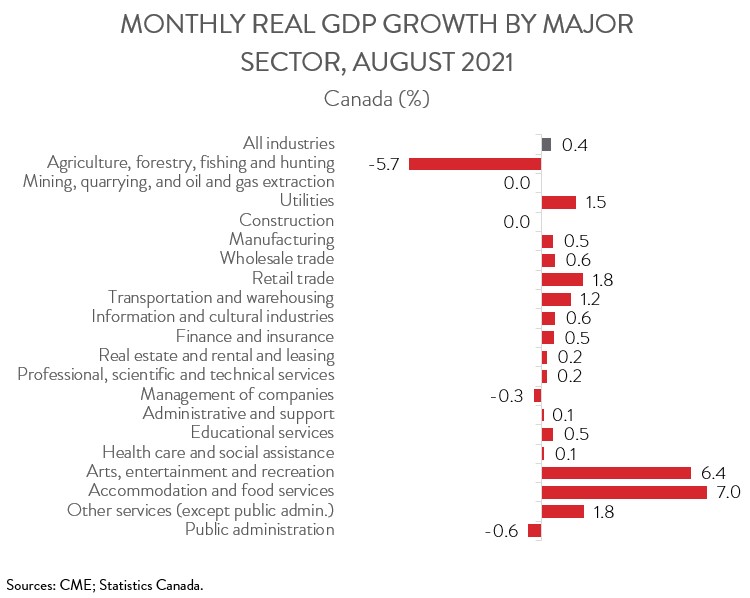 Manufacturing was also a key growth driver in August, with output increasing 0.5%. However, this was only the sector’s fourth increase in eight months this year, as factory activity continues to be weighed down by significant supply chain disruptions and labour shortages. In fact, manufacturing output has increased by a total of just 0.1% since January and remains 4.3% below its pre-pandemic level. Unfortunately, preliminary information indicates that manufacturing output suffered a significant decline in September.

Canada’s agriculture sector is also having a tough year, as record-setting heat and drought conditions in Western Canada continues to severely affect production. After decreasing 5.5% in July, agriculture, forestry, fishing, and hunting output fell a further 5.7% in August.

Other major goods-producing industries had a relatively uneventful month. Mining, quarrying and oil and gas extraction activity was flat in August, following two months of solid expansion. Construction output was also essentially unchanged, but it came on the heels of three consecutive monthly declines.

Output was up in 6 of 11 major manufacturing subsectors. The chemicals sector led the way with an increase of 3.1% in August, more than offsetting a 2.5% decline in July. Fabricated metals output rose 3.5%, partly making up for a 6.4% drop in the previous month. 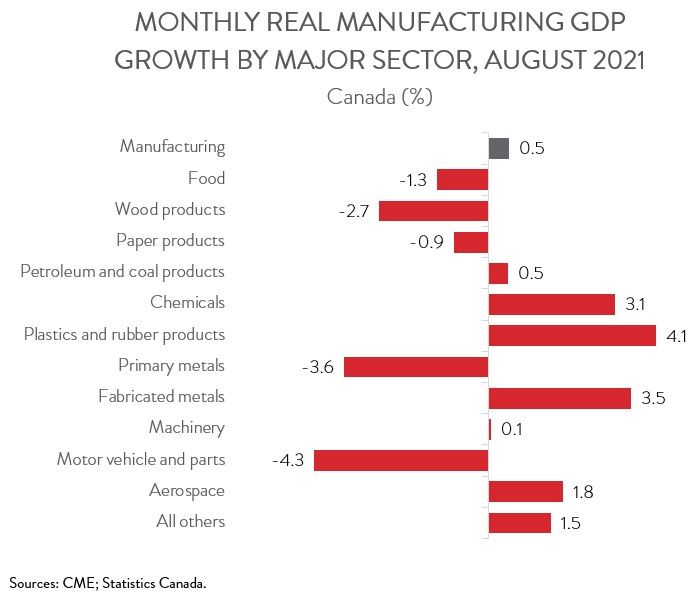 At the other end of the spectrum, motor vehicle and parts output declined 4.3% in August, down for the fourth time in five months. With the computer chip shortage continuing to dent auto production, motor vehicle and parts output in August was down 28.0% compared to February 2020 and 24.7% compared to August 2020. While most auto makers expect the global semiconductor shortage to gradually ease next year, as of now the situation appears to be worsening, with wait times lengthening and delays getting longer.