Real GDP Advances 0.8% in October, with Manufacturing Leading the Way

ECONOMY EXPANDS 0.8% IN OCTOBER; MANUFACTURING UP 1.8%

Real GDP rose 0.8% in October, building on growth of 0.2% in September. The October results left Canada’s economy 0.4% below its pre-pandemic (February 2020) level. In more good news, a preliminary estimate indicates that real GDP expanded a further 0.3% in November.

Manufacturing output advanced 1.8% in October, more than offsetting a 1.5% contraction in September. This gain brought manufacturing to within 4.1% of its pre-pandemic level. 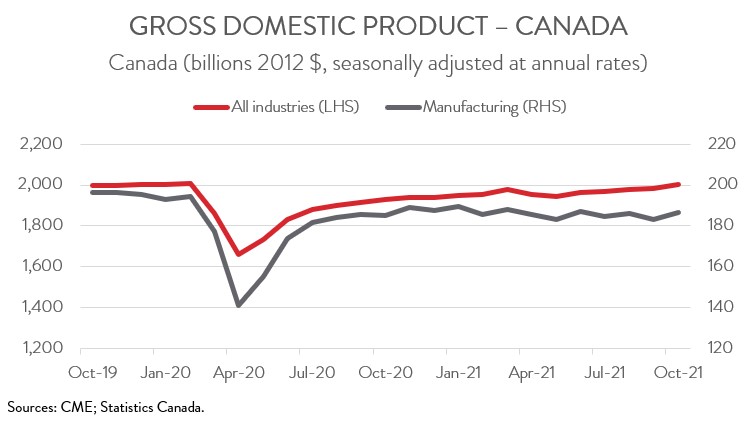 While the October report and November preliminary estimate indicate that the Canadian economy enjoyed a strong start to the fourth quarter, activity over the winter months will be impaired by new public health restrictions imposed by some provinces to limit the spread of the Omicron variant. As well, the supply chain disruptions and labour shortages affecting the manufacturing sector and other segments of the economy could be exacerbated by surging COVID cases.

The GDP increase in October was widespread, spanning 17 of 20 industries, with manufacturing, mining, and construction making the biggest contributions to growth.

Mining, quarrying, and oil and gas extraction output climbed 1.5% in October, the sixth straight monthly increase, as all three subsectors were up. Growth in the oil and gas extraction sector was buoyed by rising activity in the oil sands, while the gains in mining and quarrying were broad-based, with non-metallic mining, metal ore mining, and coal mining all increasing during the month.

Construction output rose 1.6% in October, following declines in four of the past five months, as both residential and non-residential building construction posted gains. 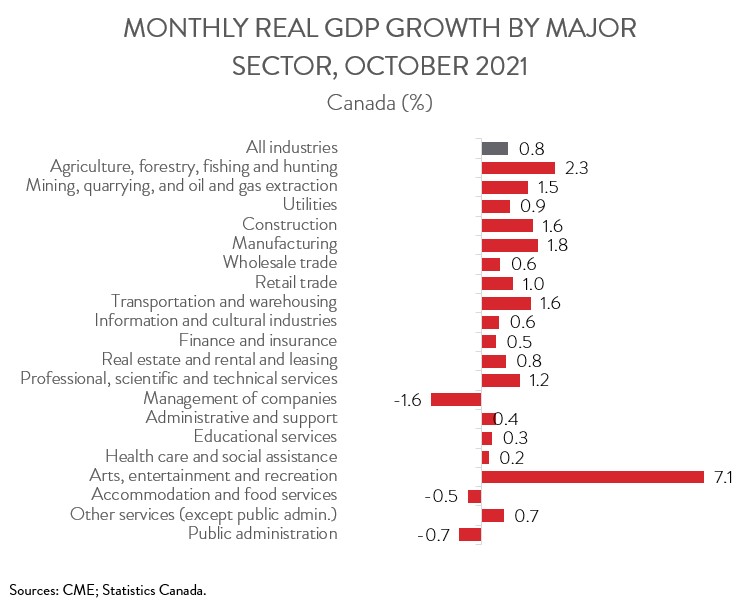 Output in the real estate and rental and leasing sector expanded 0.8% in October, the largest increase since December 2020. The output of offices of real estate agents and brokers contributed the most to growth, thanks to strong home resale activity in most areas of the country.

The transportation and warehousing sector posted output growth of 1.6% in October, the fifth consecutive monthly expansion. For the fourth time in the past five months, air transportation experienced double-digit growth, as air travel gradually recovers. However, despite these gains, the subsector remains nearly 70% below its January 2020 level of activity.

On the negative side, output was down in public administration (-0.7%), accommodation and food services (-0.5%), and management of companies and enterprises (-1.6%).

Within manufacturing, output was up in 6 of 11 major subsectors. Motor vehicle and parts manufacturing output jumped 18.5% in October, largely offsetting a 16.0% plunge in September. Automakers were able to ramp up production despite continuing to grapple with the global semiconductor shortage. 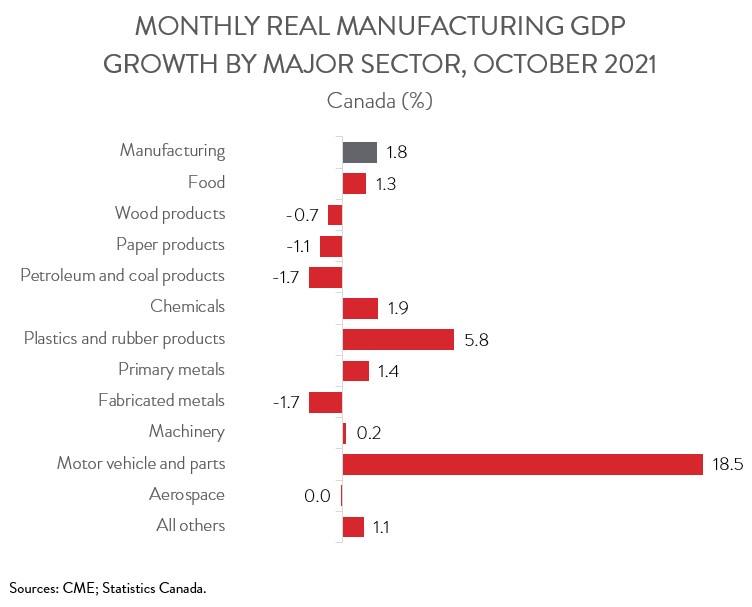 October was also a healthy month for the plastics and rubber products manufacturing subsector, which saw output climb 5.8%. The strong increase was partly attributable to higher demand from motor vehicle and motor vehicle parts manufacturers.

Other industries that contributed to manufacturing growth in October included chemicals (+1.9%), food (+1.3%), and primary metals (+1.4%), while subsectors that subtracted from growth included fabricated metals (-1.7%), petroleum and coal products (-1.7%), and paper products (-1.1%).