The Canadian economy posted a third consecutive month of solid growth in May, driven higher by a surge in manufacturing output and a modest recovery in the struggling construction sector.

After sputtering for half a year, the economy is suddenly enjoying an undeniably healthy run. National GDP expanded by about 0.23 per cent in May, equivalent to an annualized increase of about 2.8 per cent. On top of that, GDP estimates for March and April were revised upwards as well. April’s growth estimate was increased from a preliminary assessment of 3.1 per cent to 4.0 per cent, while March’s numbers were adjusted from 6.5 per cent to 6.7 per cent (all figures are at annualized rates). This represents the strongest three-month stretch of economic growth Canada has seen in years. 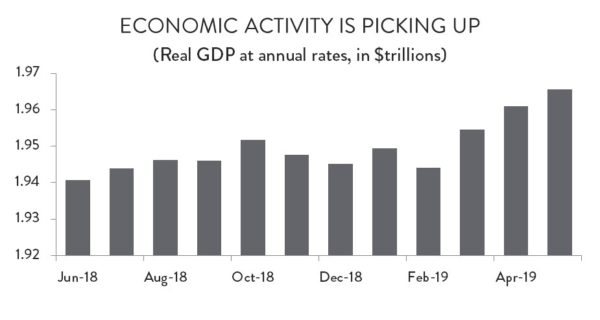 The only bad news from an aggregate perspective is that there was an even stronger surge in GDP growth at this same point last year. As a result, year-over-year annualized GDP growth dipped slightly – from 1.6 per cent in April to an estimated 1.4 per cent in May.

While economic growth in April was driven by a surge in oil sands activity in Alberta, it was the manufacturing sector’s turn to lead the way in May. GDP in manufacturing jumped by 1.17 per cent that month, equivalent to an annualized growth rate of 15.0 per cent. All told, manufacturers added nearly $2.4 billion in new value-added activity to the Canadian economy compared to April – accounting for 53 per cent of national GDP growth for the month. 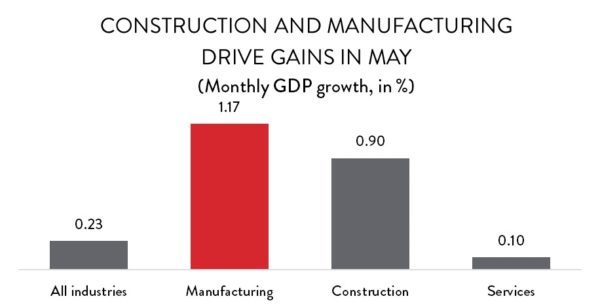 The other major economic growth driver in May was the construction sector, where GDP was nearly 11.3 per cent higher (at annualized rates). While that growth rate is unambiguously strong, it represents only a small step on the road to recovery for construction activity across the country. Construction GDP fell dramatically beginning last summer and it remains well below its levels from a year ago. 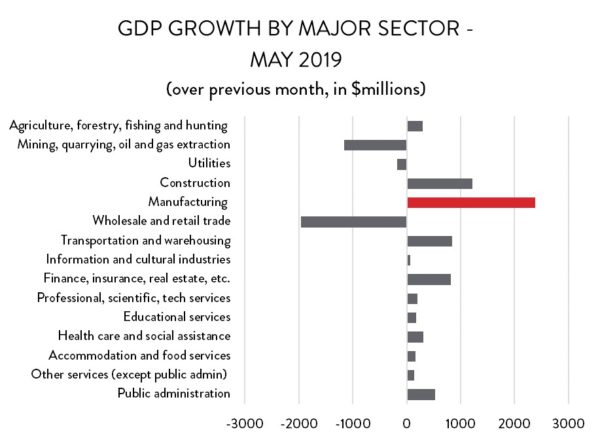 Manufacturing and construction were the star performers in May, but overall economic growth was remarkably broad-based. Of the 15 major economic sectors in Canada, all but three were higher in May. The only sectors to see GDP contract were mining and energy, which retreated slightly from its massive spike in April, as well as wholesale and retail trade, and utilities.

The spike in manufacturing GDP continues the trend of on-again, off-again growth that we’ve been seeing over the past six months. Since November, a familiar pattern has emerged: manufacturing GDP will surge in one month, followed by a substantial retreat in the next. 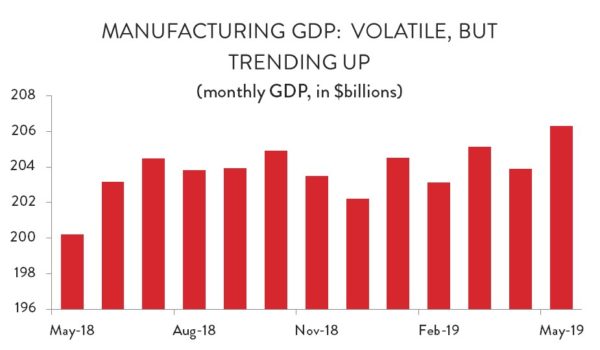 Manufacturing growth in May was driven by a recovery in the auto sector. In April, a combination of temporary plant shutdowns and lower output in those still active drove GDP down by 6.7 per cent (not on an annualized basis). But producers more than made up for it in May. Auto sector GDP spiked by 9.2 per cent (also not annualized), driving total value-added output in the sector to its highest level since October. That said, the medium-term trend is a negative one; GDP in motor vehicles and parts production has been flat or declining slightly since 2016. 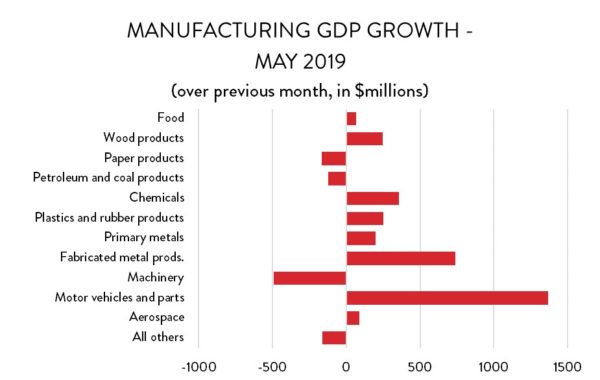