ECONOMY SEES NO GROWTH IN MAY

The Canadian economy recorded no growth in May, better than the initial estimate of a 0.2% drop. A preliminary estimate indicates that real GDP edged up 0.1% in June. 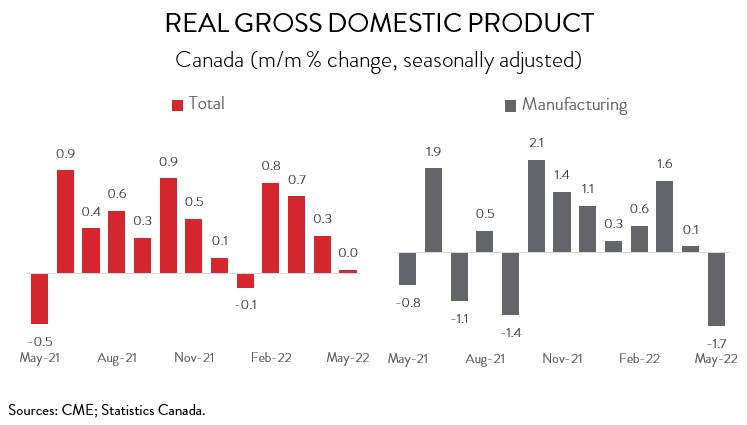 After expanding for seven straight months, manufacturing output fell 1.7% in May, the biggest monthly drop since April 2021. The sector has not gained much traction over the past two-plus years. As of May 2022, manufacturing GDP was 0.4% below its pre-pandemic level. On a positive note, an advance estimate suggests that the sector registered growth in June.

While the May data and the June advance estimate suggest that the Canadian economy is slowing down, it also indicates that second quarter annualized growth came in at 4.6%, a notable contrast to the decline observed in the U.S. However, slowing U.S. economic activity, combined with the Bank of Canada’s aggressive interest rate hike campaign, will very likely lead to much cooler growth in the coming quarters.

Output was up in 14 of 20 industries in May. The transportation and warehousing sector contributed most to the growth with a gain of 1.9%, the fourth increase in as many months. Notably, air transportation posted its third straight double-digit monthly growth, attributable to higher movements of both cargo and passengers. Although this was the sector’s strongest four-month pace in the 25-year history of the data, output was still 7.2% below its February 2020 pre-COVID level. 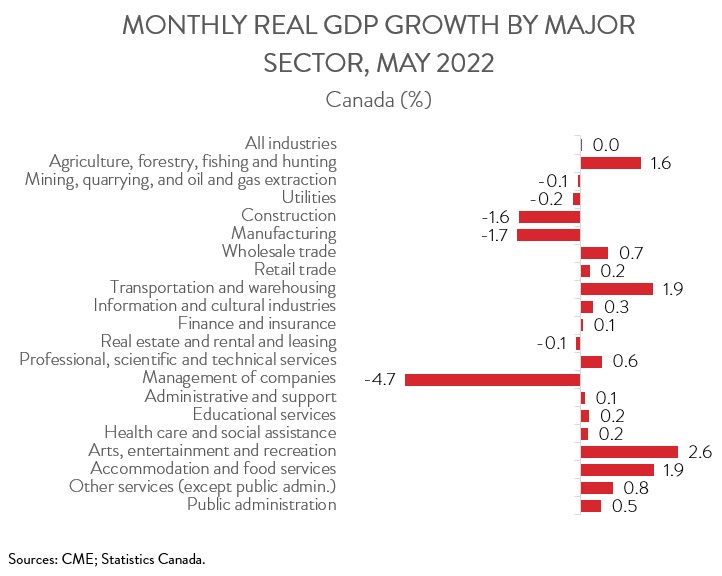 Accommodation and food services output also climbed 1.9% in May, up for the fourth month in a row. Output in this sector is now above its pre-pandemic level, as consumers continue to unleash pent-up demand and return to dining out and traveling.

On the negative side, the construction industry’s month was almost as bad as manufacturing’s. Construction output was down 1.6% in May, the second straight monthly decline. According to Statistics Canada, many of Ontario’s unionized construction workers were on strike during the month, causing delays in numerous construction projects.

Turning back to manufacturing, output was down in 5 of 11 major subsectors in May. Motor vehicle and parts manufacturing plunged 8.5%, weighed down by the ongoing global semiconductor chip shortage and retooling at some assembly plants. This was the sector’s biggest monthly decline since September 2021. 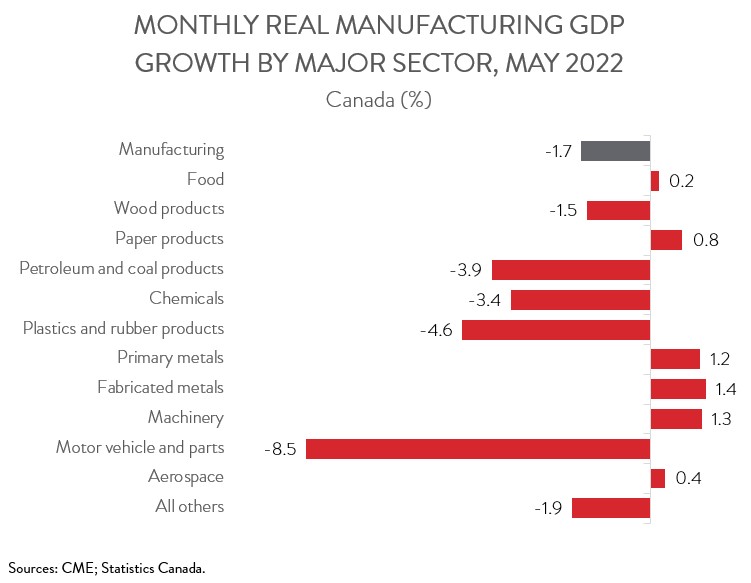 On a positive note, decent increases were observed in the machinery (+1.3%), fabricated metal (+1.4%), and primary metal (+1.2%) industries. This was the machinery industry’s third consecutive monthly advance.