The Canadian economy expanded at an annualized rate of 3.3% in the second quarter of 2022, the fourth consecutive quarterly increase and similar to Q1’s 3.1% pace. 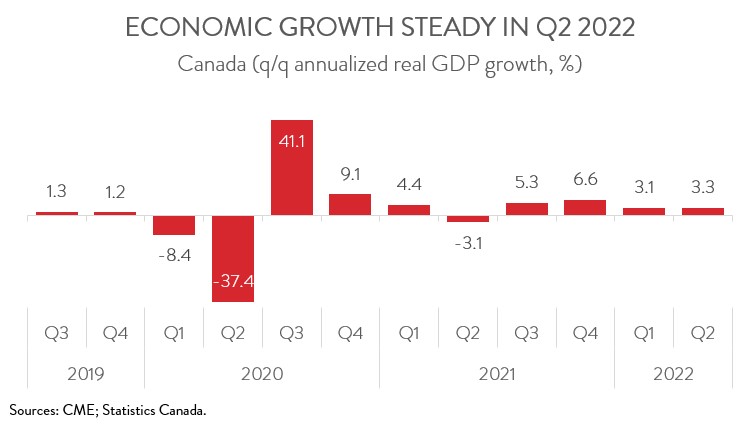 Although Canada’s Q2 GDP growth figures were solid and stronger than those of its international peers, the expansion came in below consensus estimates of 4.4% annualized growth. As well, growth decelerated as the quarter progressed, indicating that the economy’s momentum is slowing amid elevated inflation and rising interest rates. Add to that the fact that the Bank of Canada is expected to announce another aggressive rate hike next week, we should expect much slower economic growth in this year’s second half.

Business investment in inventories was a big driver of second quarter growth, adding 1.5 percentage points to GDP. At the same time, business investment in non-residential structures and machinery and equipment rose at an annualized pace of 13.9% in Q2, the fifth straight quarterly gain. Investment in engineering structures was particularly robust, thanks to projects such as the Kitimat LNG facility in BC and higher capital spending in Alberta’s oil and gas sector. 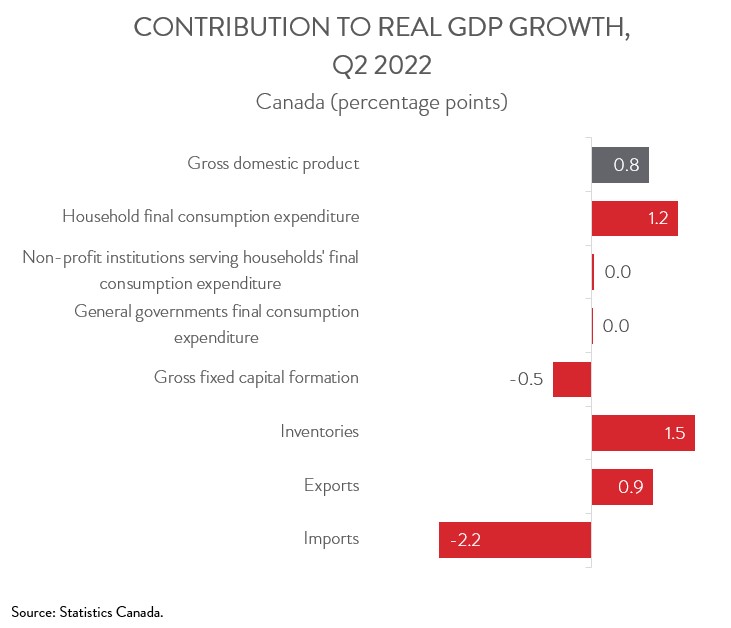 Spending by households rose 9.7% annualized in Q2, with spending on semi-durable goods and services leading the charge. The jump in services was attributable to the opening of the economy, as consumers unleashed pent-up demand for travel and entertainment.

On the flip side, residential investment plunged at an annualized clip of 27.6% in Q2, as rising mortgage rates took a big bite out of the housing market. Net trade was also a major drag on growth. Even though exports of goods and services rose an annualized 10.9% quarter-over-quarter, this was no match for the 30.5% jump in imports.

Turning to monthly data, real GDP edged up 0.1% in June, following little growth in May. Preliminary information indicates that the economy shrank 0.1% in July.

Manufacturing output rose 0.2% in June, the first increase in three months. Despite the advance, the sector has not gained much traction over the past two-plus years, as it faces several ongoing challenges including supply chain disruptions, workforce shortages, and soaring production costs. As of June 2022, manufacturing GDP was 0.3% below its pre-pandemic level. Unfortunately, a preliminary estimate indicates that the sector’s output declined in July. 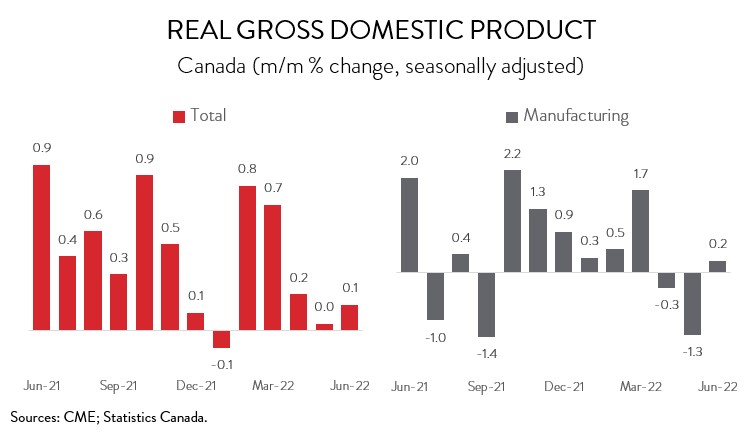 The GDP gains in June were broad-based, spanning 14 of 20 industries. Client-facing sectors remained on a recovery path, boosted by the continued easing of public health and border measures. Output was up in accommodation and food services (+0.8%), arts, entertainment and recreation (+1.8%), and transportation and warehousing (+0.1%). Other areas of strength included educational services (+0.7%) and agriculture, forestry, fishing and hunting (+1.5%).

On the negative side, industries sensitive to interest rate movements continued to weaken. Output in the finance and insurance sector was down 0.6% in June, following no growth in May and a 0.4% contraction in April. At the same time, the real estate and rental and leasing sector edged down 0.1%, the fourth consecutive monthly decline. Finally, construction output decreased 0.4% in June, down for the third month in a row. 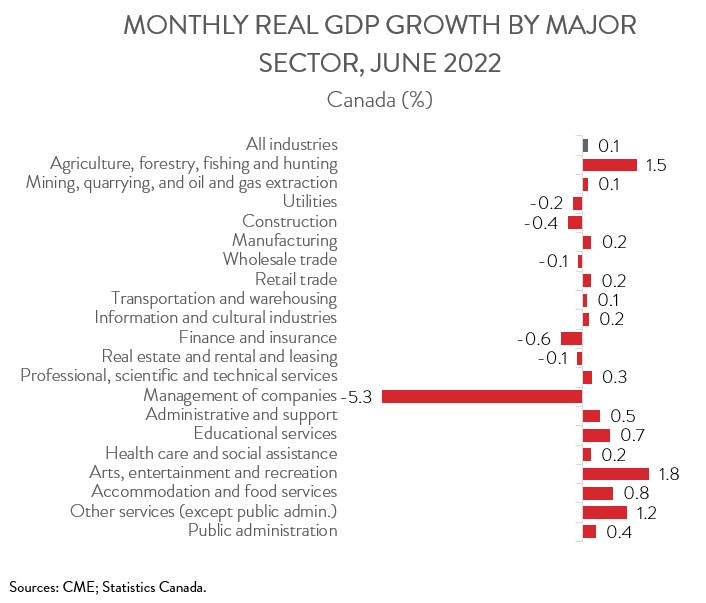 Output was up in 7 of 11 major manufacturing subsectors in June. The chemical manufacturing sector led the way with a 3.0% increase, up for the first time in four months. The gain was largely attributable to a big jump in pharmaceutical and medicine activity. Other growth drivers included fabricated metal manufacturing (+1.7%) and machinery manufacturing (+1.2%). At the other end of the spectrum, the most notable declines were recorded in food manufacturing (-2.0%), motor vehicle and parts manufacturing (-3.8%), and petroleum and coal product manufacturing (-4.1%). With the decrease in June, auto industry output was down more than one-fifth from its pre-pandemic level, as it continues to be weighed down by the global semiconductor shortage. 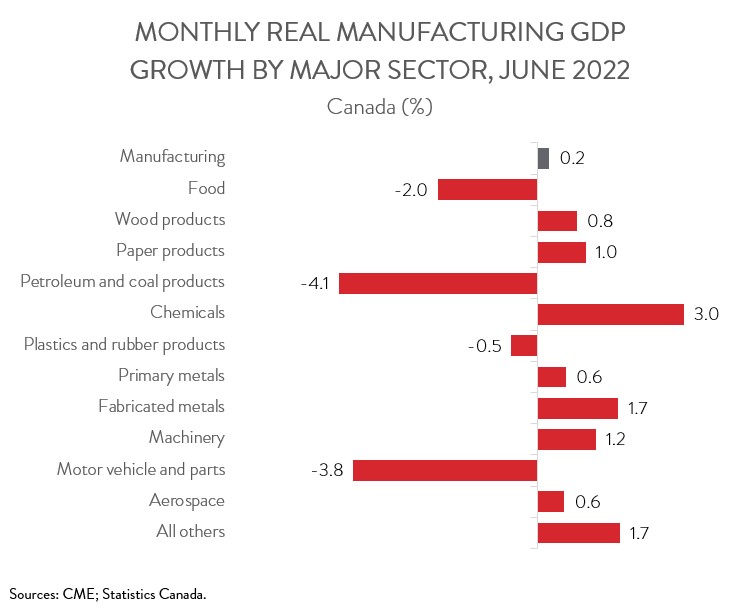