The Canadian economy edged up by 0.1% in July, matching the increase recorded in June. A preliminary estimate indicates that real GDP was unchanged in August. 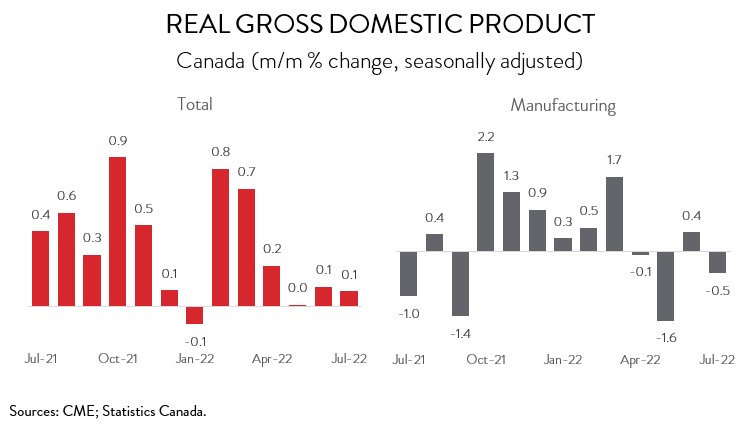 Manufacturing output fell by 0.5% in July, down for the third time in four months. However, thanks to strong gains in late 2021 and early 2022, the sector has expanded by 4.1% over the past 12 months. Nevertheless, it still has yet to recover all of its pandemic losses. A of July 2022, manufacturing GDP was 0.7% below its February 2020 level. Unfortunately, an advance estimate suggests that the sector declined again in August.

The Canadian economy continues to show resilience by posting modest gains in three of the past four months and, as such, is on track to post 1% annualized growth in the third quarter. However, economic momentum appears to be waning, weighed down by high inflation and rapidly rising interest rates. Along with these challenges, activity in the manufacturing sector is also being held back by ongoing supply chain disruptions and labour shortages.

Output was up in 11 of 20 industries in July. Mining, quarrying and oil and gas extraction output expanded 1.9% in July, following slight declines in the previous two months, thanks to growth in all three subsectors. Growth was particularly strong in oil sands extraction, its first increase since April. Non-metallic mineral mining and quarrying also posted a healthy gain, reaching its highest level of output since July 2020, propelled by a jump in potash mining. 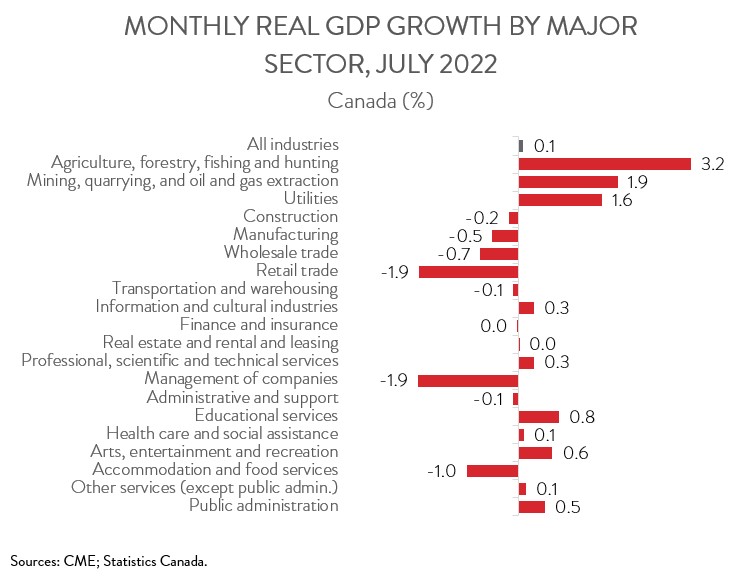 Output in the agriculture, forestry, fishing and hunting sector rose 3.2% in July, led by an increase in crop production. As noted by Statistics Canada, weather conditions in Manitoba and Saskatchewan have been much more favourable this year, resulting in a positive outlook for the annual harvest.

The public sector (educational services, health care and social assistance, and public administration) was another growth driver, posting its third consecutive 0.4% monthly gain. All sectors contributed to growth.
On the downside, retail trade output contracted 1.9% in July, falling to the lowest level since December 2021, as 10 of 12 subsectors decreased. In particular, large declines were recorded in the gasoline station and food and beverage store subsectors.

As well, wholesale trade output decreased 0.7% in July, down for the fifth time in six months, as seven of nine subsectors decreased. Personal and household goods contributed the most to the decline, mainly due to a drop in textile, clothing and footwear wholesaling.

Turning back to manufacturing, output was down in 4 of 11 major subsectors in July. Leading the decline was fabricated metal product manufacturing (-4.9%), attributable mainly to a decrease in architectural and structural metals manufacturing. Machinery manufacturing also had a tough month, contracting by 3.1%, its first decline in five months. As well, food manufacturing tumbled 1.8% in July, down for the third time in four months and the biggest monthly drop since February 2021.

On a positive note, motor vehicle and parts manufacturing expanded by 6.4% in July, partially offsetting losses incurred over May and June. Despite this gain, production in the auto industry remains nearly 15% below its pre-COVID level. Among major manufacturing subsectors, only the aerospace sector is further from a full recovery.

Finally, a solid increase was also observed in petroleum and coal product manufacturing (+3.2%), its first gain in three months. 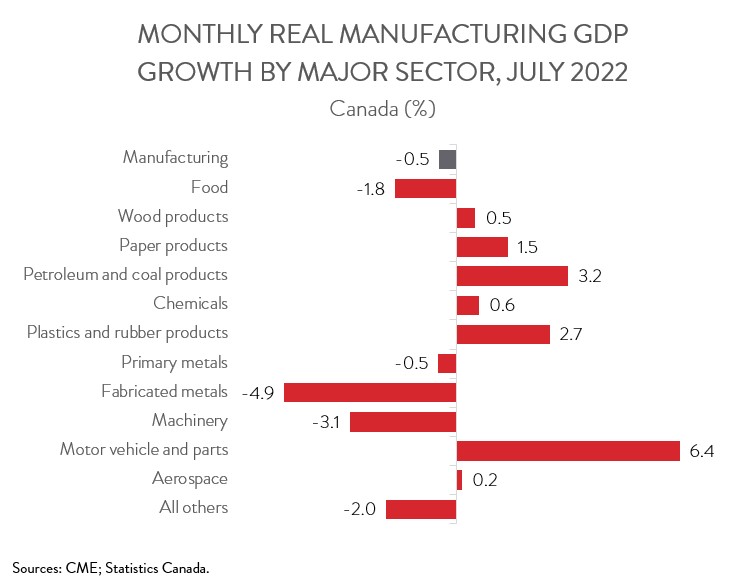