The Canadian economy expanded by 0.1% in August, the seventh consecutive monthly advance. A preliminary estimate indicates that real GDP rose another 0.1% in September. 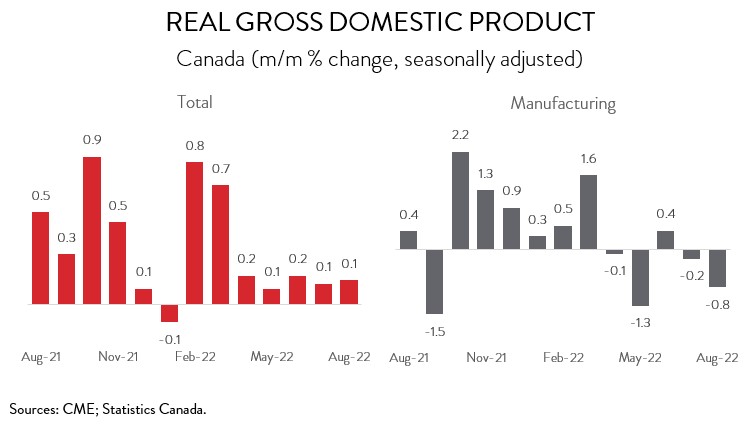 Manufacturing output fell 0.8% in August, the fourth decline in five months and the lowest level of output since January 2022. Unfortunately, the sector has yet to recover all of its pandemic losses, as ongoing challenges such as labour force shortages, supply chain disruptions, and soaring production costs have held back the recovery. As of August 2022, manufacturing GDP was 1.0% below its February 2020 level. On a positive note, an advance estimate indicates that the sector expanded in September.

While it is encouraging that the Canadian economy continues to show resilience by posting growth for seven straight months, momentum is clearly slowing. Indeed, today’s report indicates that third quarter annualized GDP growth came in at 1.6%, down from 3.3% in Q2. The pace of economic growth is expected to moderate further in the coming months, reflecting the impact of higher interest rates, persistent inflation, and weaker foreign demand.

August’s increase in output was broad-based, spanning 14 of 20 industries. The agriculture, forestry, fishing and hunting sector led the way, with output rising 3.9%. Crop production (except cannabis) had a particularly strong month, driven mainly by an increase in volumes of wheat and other grains as Western Canada enjoys a bumper harvest. 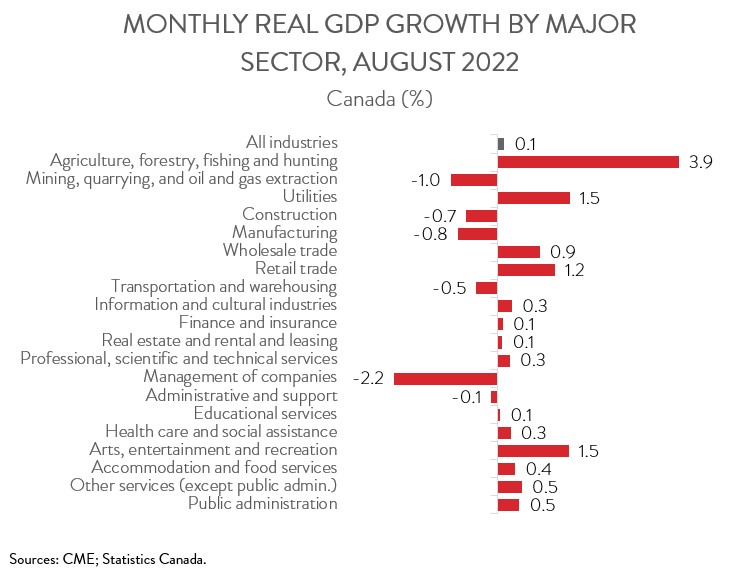 Retail trade output climbed 1.2% in August, partially recovering from a 1.7% decline in July. The increase was driven by strong sales growth at gasoline stations, food and beverage stores, and sporting goods, hobby, book and music stores.

Output in the wholesale trade sector rose 0.9% in August, up for just the second time in seven months. Machinery, equipment and supplies wholesaling contributed the most to the growth, with Statistics Canada attributing recent strength in this subsector to imports of machinery and equipment needed for LNG Canada’s natural gas liquefaction plant under construction in BC.

On the downside, the mining, quarrying and oil and gas extraction sector contracted 1.0% in August, partly erasing the 2.0% gain recorded in the previous month. Oil sands extraction fell sharply as production was interrupted by maintenance activity at a synthetic crude upgrader.

As well, construction output fell 0.7% in August, the fifth consecutive monthly decline. Given that this sector is particularly sensitive to interest rates, the slowing activity is not a surprise.

Turning back to manufacturing, output was down in 9 of 11 major subsectors in August. The paper manufacturing sector suffered the steepest losses, with output tumbling 4.1%. This was the sector’s biggest monthly decline since May 2020 during the first wave of the pandemic.

Motor vehicle and parts manufacturing continues to struggle, with output shrinking 1.8% in August. This was the third decline in four months, a sign that supply chain bottlenecks continue to plague the auto industry.

At the same time, wood product manufacturing contracted 2.5% in August, down for the second month in a row. Statistics Canada noted that softwood lumber prices have been falling since April, as North American housing market activity slows in response to higher interest rates. 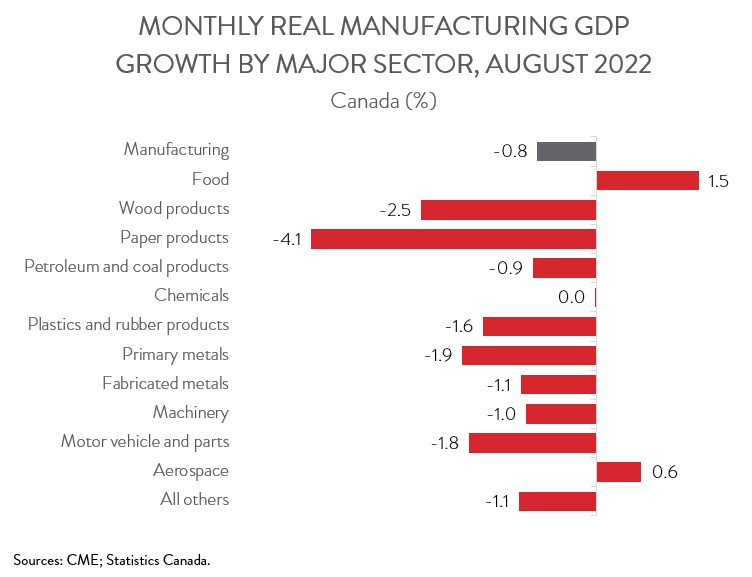