The Canadian economy edged up 0.1% in October, building on the 0.2% gain in September. A preliminary estimate indicates that real GDP was essentially unchanged in November. 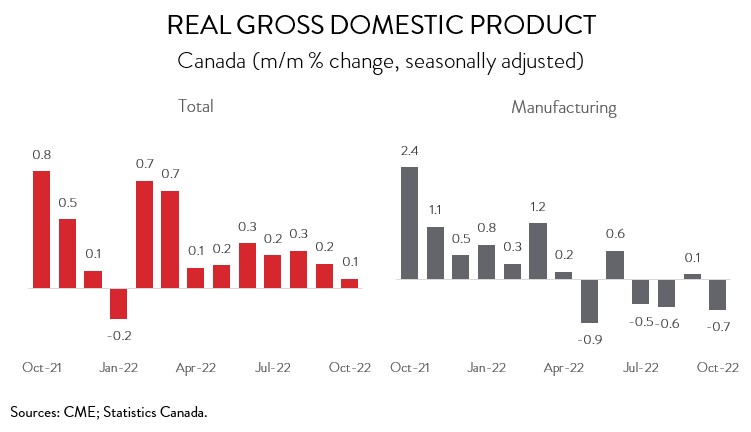 Manufacturing output shrank 0.7% in October, the fourth decline in six months. As a result, the sector’s GDP fell to its lowest level this year, leaving it about 1% below its pre-pandemic level. Over the past 12 months, manufacturing output has increased by 2.2%. On a positive note, an advance estimate indicates that manufacturing sales increased 0.6% in November, though it remains to be seen if the growth was driven by higher volumes or higher prices.

While the Canadian economy has been holding up relatively well over the past few months, the manufacturing sector has clearly been losing momentum. The situation in Canada’s manufacturing sector mirrors the slowdown in global manufacturing activity. Central banks around the world have been simultaneously hiking interest rates to tamp down inflation, and this is denting demand for certain manufactured products, especially interest-rate-sensitive durable goods.

October’s increase in output spanned 11 of 20 industries. All the gains came from the services side of the economy, with growth strongest among client-facing industries. 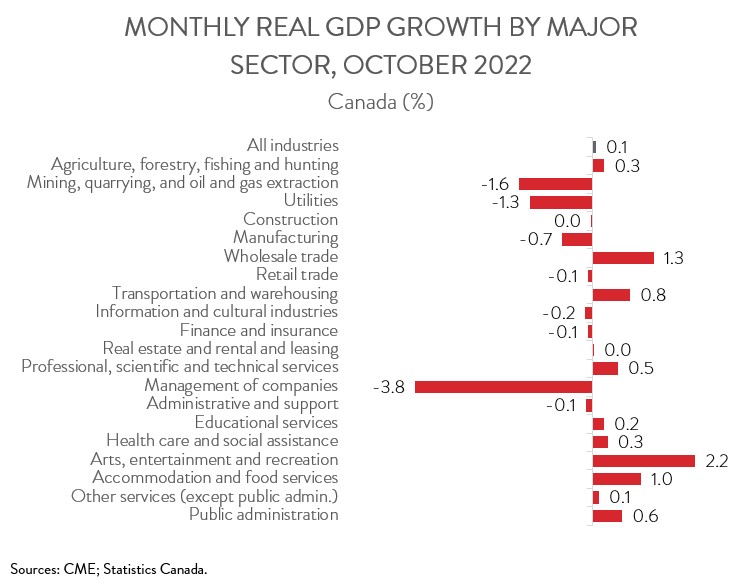 The arts, entertainment and recreation sector increased 2.2% in October, up for the ninth month in a row. Spectator sports activity was particularly strong, with Statistics Canada noting that the Toronto Blue Jays hosted two playoff games in October and that the NHL pre-season started later than usual, both resulting in a higher than usual increase in attendance.

The public sector (educational services, health care and social assistance, and public administration) also made a solid contribution to growth in October, with output up 0.4%. As well, wholesale trade output rose 1.3% in October, up for only the second time in five months.

On the negative side, the mining, quarrying and oil and gas extraction sector contracted 1.6% in October, more than erasing the 1.5% gain recorded in September. Oil sands extraction had a particularly difficult month, with production interrupted by scheduled maintenance activity at some synthetic crude upgraders in Alberta. This was partly offset by a strong showing from the potash mining sector, which continues to benefit from robust global demand as countries seek to replace Russian and Belarussian supplies.

Turning back to manufacturing, output was down in 7 of 11 major subsectors in October. The fabricated metal product manufacturing sector suffered the steepest losses, with output tumbling 4.7%. This was the sector’s biggest monthly decline since July 2021.

Machinery manufacturing also had a tough month, with output contracting 2.9% in October. Even though this was the sector’s third decline in four months, it has still enjoyed robust growth over the past 12 months, with output up 8.7% year-over-year in October.

Primary metal manufacturing fell 2.5% in October, down for the second consecutive month. These back-to-back declines pushed output down to its lowest level since February 2022.

Gains were modest among the four subsectors that posted growth in October. Paper manufacturing climbed 3.2% in October, the first increase in three months. At the same time, chemical manufacturing rose 0.8%, up for the fifth month in a row. 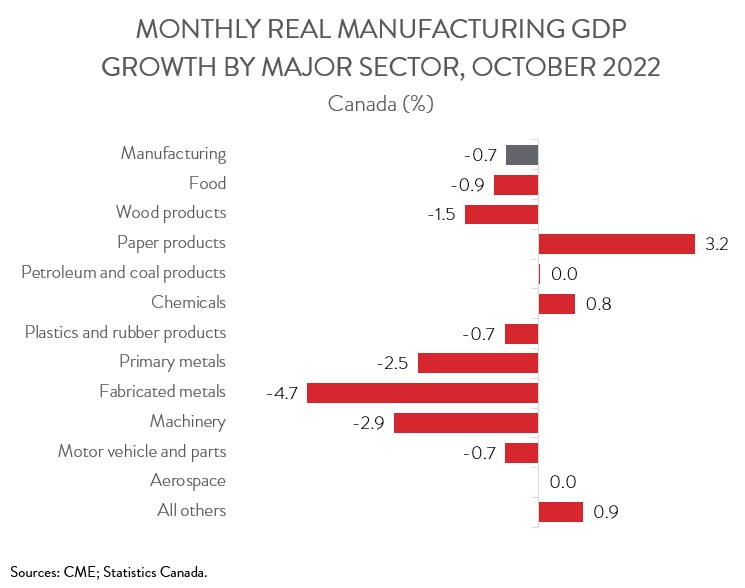